Yesterday I woke up, I meditated, I did not work on the novel because everything was out of place with the painting and resultant turmoil.

We did start getting ready for painting right in the morning, took a nice lunch break: 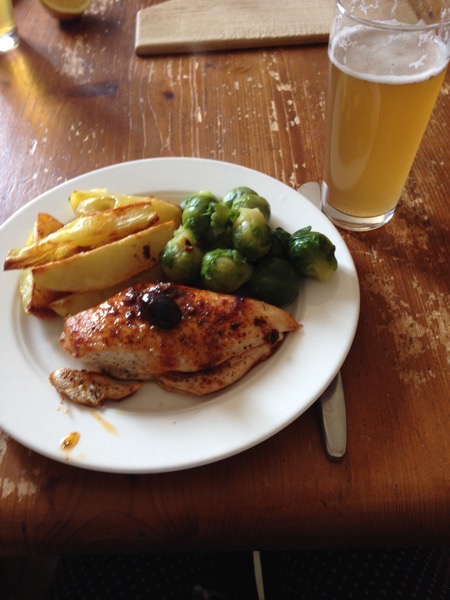 My husband also told me to take a picture of the chicken in the pan because it was looking so good: 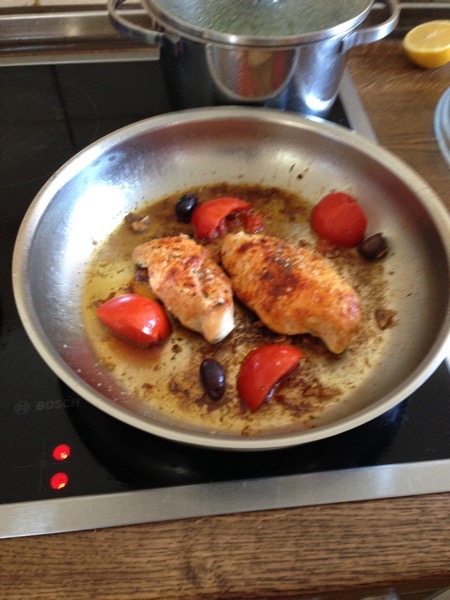 And then still weren’t ready to start the actual painting. There was a lot of cleaning. And putting tape everywhere and putting old newspapers everywhere. And then running out of tape again. New rule: always buy one more roll of tape than you think you could possible need.

Around three my husband was pretty optimistic that we could start painting at four. An hour later I texted the boy that there would be no watching of Star Trek that day. My husband was set on finishing the painting and I was going with it. The later it got the more I had the feeling that might not be a good idea.

We were ready to start just in time for dinner so we all ate some sandwiches.

And then we started painting. Things went pretty well, with my new, broader paint brush painting the edges and corners went faster than last time. Just when my husband was about to finish painting the ceiling some of the old paint started to flake off when he rolled over it. So he stopped and got a scraper to take that old paint off.

Which resulted in the two of us scraping off all the paint from the ceiling. All. The. Paint. 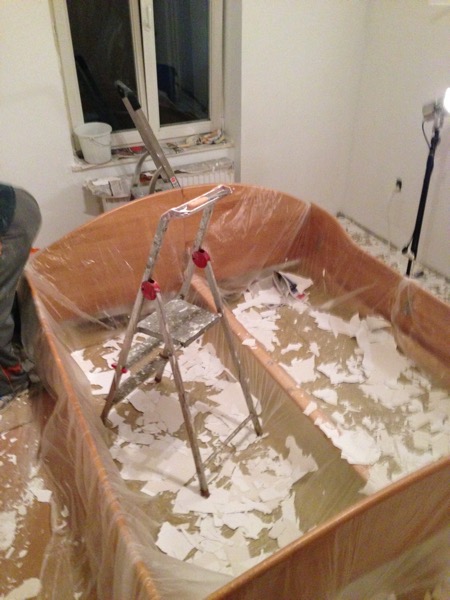 He went to get primer while I was picking up most of the flaked paint.

Then it turned out that while we still had a ton of primer that primer was the one I bought in 2001.

My husband used it anyway.

Meanwhile I started painting the bathroom. We had run out of tarps and such and also things like the bathtub are really hard to cover with tarps and so there was a lot of paint splattered everywhere. Which aggravated my poor husband who had spent hours cleaning that bathtub earlier.

We were a little tired and exhausted at that point.

You’re supposed to let primer sit for a day before painting over it.

Guess what my husband did?

By then I was beyond tired and exhausted and just tackled the hallway next.

By 1 a.m. I decided that painting be damned I just couldn’t anymore, so I left the mess in the bedroom, scrubbed most of the paint off my hands and face, brushed my teeth and went to bed.

I set my alarm for 6.30. And here I am after a mere five hours of sleep, sitting in a complete mess.

It still looks like the painting is mostly fine, though. There are a few places where the ceiling flaked yet again but I guess as soon as that is dry we should be able to just dab more paint on top and it will probably hold up for a few years.

And then we need to scrub every inch of floor with a toothbrush to get the paint off that we trailed everywhere, then move all the furniture and stuff back where it belongs, clean the brushes and such and then we will finally be finished.

On the bright side I only have a few students today. On the not so bright side I have a potential new student coming in tonight at seven, a time of day where I’m not at my best even after a night of adequate sleep.

On the other bright side I’ll only teach her for half an hour and giving try-out lessons always fires me up with adrenaline.

There will be no running today, no writing, nothing else but more cleaning and teaching.

Yeah? But the painting is mostly done.