I’d blame Sarina Bowen if it weren’t all my fault.

I went to bed way too late yet again because I wanted to finish another novel. Which meant that I got even less sleep than the night before and that meant the day didn’t really go well. Go figure.

I did manage to do three pomodoros on the novel, two before and one after breakfast but that still didn’t give me enough words to finish before the end of March. Yes, that would be the novel I just started last week. What can I say, I love me a challenge. Not an insane one, though, and especially not when I’m overtired.

The was breakfast even though I had had plans of skipping that for the rest of the week so that I could shed some more weight. I find skipping breakfast really hard. Turns out I like eating muesli even better than eating sandwiches for dinner.

I did knit quite a bit and should really start to weave in ends because the sweater I’m knitting has four-row stripes which means there is a lot of ends. It looks pretty, though, and since it’s my only knitting project at the moment it is going along nicely. I really should start a new pair of socks or something.

We had had big plans of going to the hardware store in the afternoon but my husband was still suffering from having eaten those  Krapfen two days in a row and felt slightly sick for most of the day. I hung around a lot in the morning, then decided to go running anyway. I had a hard time making myself run, actually, so there was a lot of walking: 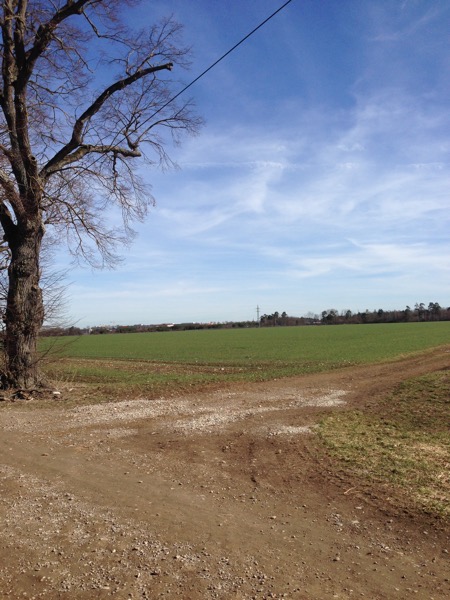 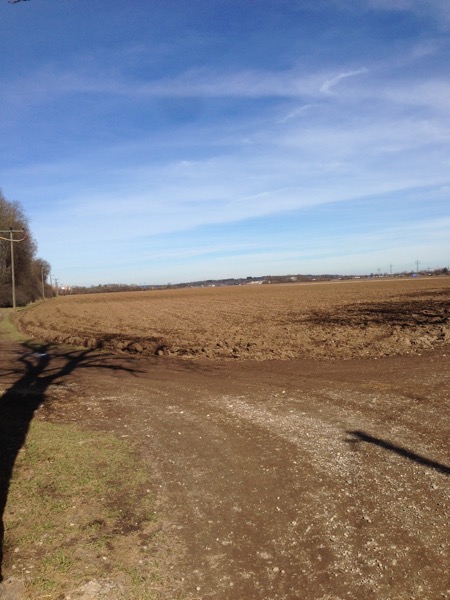 Yes, the weather was wonderful and the paths were only slightly soggy.

I should have gone grocery shopping because we were all out of veggies but my husband managed to whip up lunch anyway: 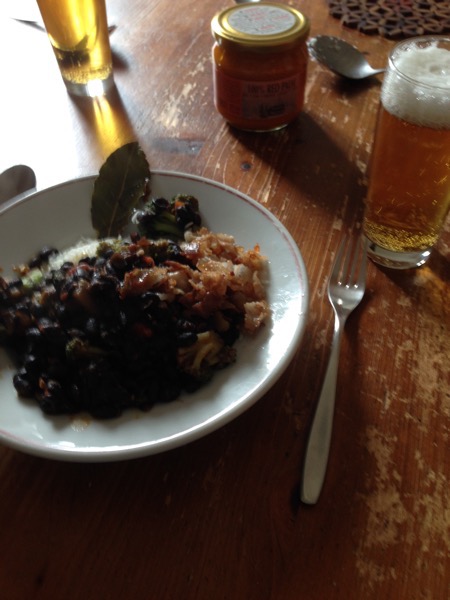 The boy went out with his grandmother. They had Mongolian buffet.

I had planned to counteract the lack of sleep by a nap after lunch but got completely engrossed with playing „Ocarina of Time“ everything became much better when I finally found out how to save my progress. It’s been years since I last played that game so I’m totally blank on most things.

I also watched about ten minutes of the book cover design course.

Then my husband had the great idea that this would be the day we would take care of the walls next to the ugliest kitchen cupboard in the world. The walls around it are slightly moldy and we have been meaning to take care of that for ages. And then we never did. So yesterday afternoon we took everything out of that cupboard, moved it away from the walls even more than before, started treating the walls, cleaned the cupboard inside and out and moved all the plates and food back in.

I had to go after working an hour on this because the boy and I had a dentist appointment. Just the regular checkup. For once I was not praised for my excellent dental hygiene. I’m blaming the woman who told me last July that I should use a different toothpaste, one that would be much better for my teeth. Turns out when I use what she suggested I get yellow, discolored teeth and heavy deposits. Guess who has changed back to her former brand of toothpaste? And guess who has to spend 100 Euros on a dental cleaning next? Yeah.

The boy needs to have his wisdom teeth extracted so that will be fun for sure. Other than that (and the fact that he could do a little better with brushing) his teeth are great. He just finished the whole brace thing and has now nicely straight teeth.

Then we came back home and I helped my poor husband who had spent the hour we were away scrubbing away.

We did sit down and watch the third installment of the „Salt, Fat, Acid, Heat“-documentary. I consider it a win that the boy turned around afterwards to say, „I need to rewatch this. I’m so captivated by all the sights and the different languages and everything that I have a hard time focusing on the actual message.“ I mean, the boy is considering rewatching a show about cooking!

I did suggest reading the book but nah, no chance. (How did I get to have a kid that doesn’t really read? Weird?)

Then I started writing this post, wrote in my journal, vowed to do better the next day and actually turned out the lights at a sensible time.

Today there will be more writing, grocery shopping, teaching on student, going to the hardware store, strength training and maybe more of the cooking show. The whole family was eager to find out where they filmed the last episode.

It looks really bad for my plans of doing all the sewing this week. But there are still a few days left.