Because I set my alarm half an hour earlier. I figured since I had tried and failed for months to not waste the first 30 to 60 minutes of my day, why not build time in to waste. And I knew that I had to be on time to get out of bed because I needed to shovel snow before making breakfast. My husband had offered to make breakfast instead of me but the earlier the snow is shoveled the easier it is.

So that’s what I did. Spent half an hour on the internet and such, meditated for five minutes and started writing even though I didn’t want to.

Went outside and shoveled. The snow was way less wet than the day before so that was pretty easy. There had been quite a few people walking through it, though, which makes getting it all off the sidewalk near impossible. At least I was the first one to shovel on our side of the street. Win! And I only did the sidewalk, not the inside.

My husband had been a little later than planned because he didn’t hear his alarm. Yes, I’m shocked too, my husband who didn’t use an alarm on principle has now started setting one.

The boy was downstairs early too. And his coffee wasn’t ready yet. I mean, who could know that he’d be five minutes early instead of his usual eight minutes late?

Breakfast was had. My husband and I talked a bit. The boy left for school early. We talked some more. We did the dishes. I folded laundry. My husband said he’d shovel the rest of the snow instead of going for a run and since we were so early I decided to write for another 25 minutes before leaving for my run.

So I sat down and wrote some more and then changed into running clothes and went running while listening to „Can’t Hurt You“. I really do love the book, I’m neglecting all the podcasts for it at the moment.

The weather was gorgeous. I couldn’t stop taking pictures: 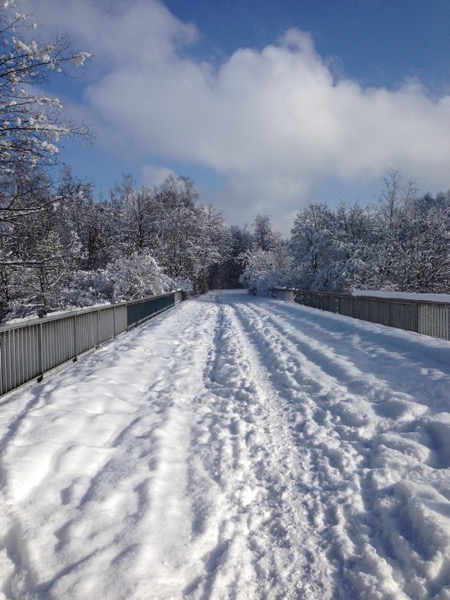 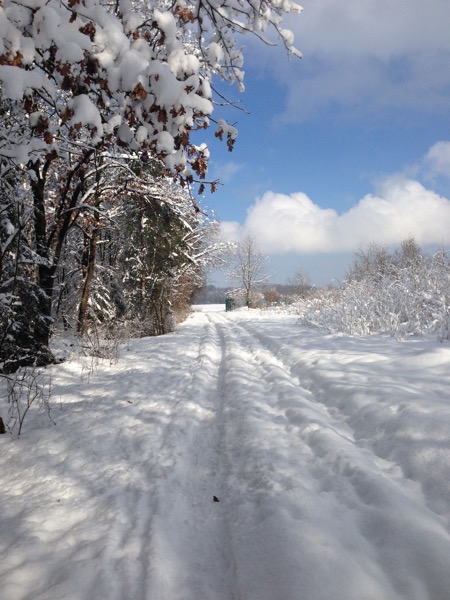 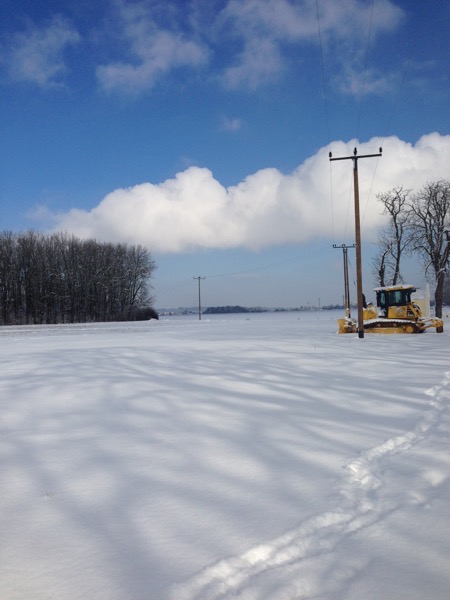 My husband went running after all, I met him at the edge of the woods going in when I was about to leave.

Took a shower, made deodorant (that had been on my list for several days in a row), took a shower and helped my husband make lunch: 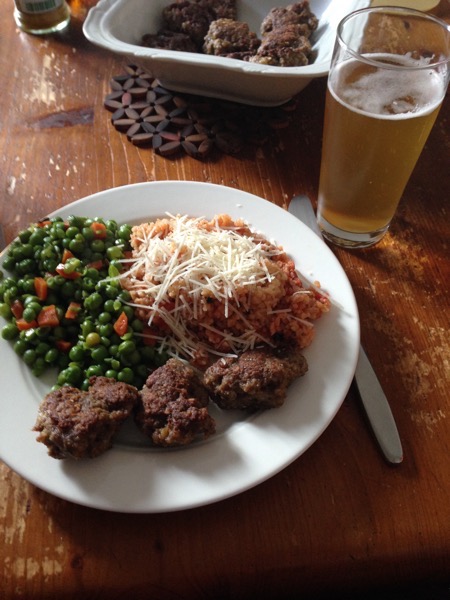 When I felt the after-lunch slump coming on I immediately got up from the kitchen bench (new trick, it has been working three times in a row now) and did the dishes. The boy helped and we talked a bit about drawing and his math test.

Then I got ready to teach, went over to the studio and practiced a bit. Then I prepared most of my lessons for the week, including finding new songs for several students. That took almost all the time until my first student.

That should have been a new student but she had to cancel because she was sick. She’ll start next week. Then I taught a lesson, then another student called in sick, then I saw a potential new student that will become a new, regular student starting next week. And the new guitar student that came on Friday came by to fetch her guitar that we (well, actually my husband) had repaired over the weekend.

Oh, and I sent an email to yet another new student. I’ll see her on Friday. That will mean teaching late which I don’t like but new students are good. (Old students are also good.) I am currently remembering that I do love doing my job. Most of the time. There was a point where I was so focused on the writing that teaching seemed almost like an afterthought. And then I remembered that a) I will have to sell a lot of books to make the same amount of money as teaching a lesson gets me and b) if teaching starts to be less interesting in any way I can always change things up and make it more interesting. I’m the teacher after all. Though I have to say students can change things up the same I can. And, maybe most important of all, c) I really love music and I love teaching and teaching people how to make music is a really, really great job.

And now I’ve started to prepare the lessons in a slightly more organized way which means I’m not scrambling to get everything ready last minute or with the student standing next to me. Feels much better. And right now seems to take about 1 1/2 hours per week. But I won’t have to do it every week.

Then I made the boy practice piano, started writing this post, finally listened to the piece of classical music for the day (I really liked it, „Fantasie nègre“ by Florence Price. A piano piece hovering between jazzy and very romantic.) then got ready for bed, wrote some more and enjoyed reading the current novel. (I’m still charmed by the “Unlikeable Demon Hunter“-series. I’m currently reading the third one.

I managed to turn the lights out early which is good because of my earlier wake-up time now.

Today there will be errands and the health food store. We’re going to the town hall to register for the petition to save the bees and might stop by the former music store owner’s house on the way, we’ll see.

Then there will be quite a bit of teaching and I’m hoping for strength training. Not much else, I guess.