Woke up from the alarm, did my usual morning things and wrote for half an hour. Win!

Made breakfast, my husband showed up around eight and the boy even got downstairs before 9.30.

There was loads of snow outside and my husband was nice enough to shovel it all away while I was talking to the boy and doing the dishes.

Does he need another guitar? Not really. Does he have one like it already? No. So we have been talking about this on and off for the past two weeks.

We are expecting a little money in the fall and my husband has also been thinking about getting something really special then, maybe a Gibson hollow-body or something. But there is a certain difference between spending 500 Euros on a guitar and spending 3,000.

So we started looking at different models of that kind of guitar. For about two hours. And found one that we had missed before. This one was a little pricier than the Epiphone but also looked like better quality.

But. That would be quite the chunk of money. For a guitar that we don’t really need. But.

Then we started cooking. And I remembered that I had all forgotten about doing yoga. So my husband continued cooking and I did yoga for half an hour. Lunch was exactly what I wanted: 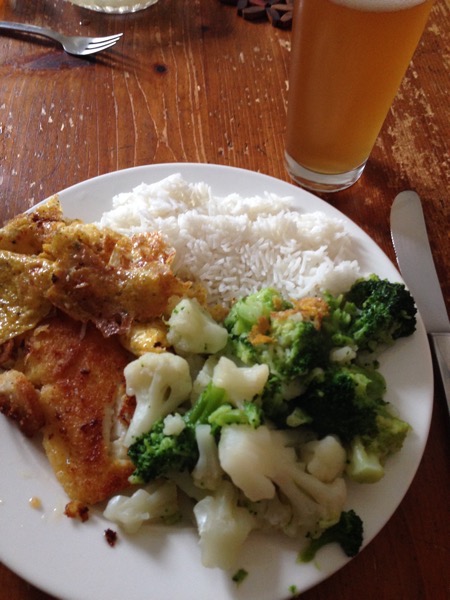 Then dishes again, and a little break and then the sidewalk was in need of shoveling again but first I talked with my husband some more. For about an hour.

We ordered the guitar, by the way. (My husband often gets asked what his wife says when he plays music every evening, or when he buys another guitar. Well, his wife usually says to go for it.)

Then I did.a bit of sloppy snow-shoveling.

Then I forced my husband to help me choose birthday presents for his aunt and uncle who will both turn 80 next week. Since I knew that my mother-in-law still hadn’t settled on a gift I thought she might be interested to join us. So I went upstairs with my laptop and showed her the two nice coffee table books we had chosen. They’ll be getting books with pretty photos of Munich where they lived when they were young. I’m hoping that that will bring up many happy memories for them. (I have had great success with that kind of present for people a certain age. It’s best when the pictures are from a time in the past that they remember.)

Well. The conversation with my mother-in-law did feel slightly surreal. Turns out that we have completely different thoughts about the whole thing, about how much to give, about when to give it and about what makes a good present.

We also talked about all kinds of things and I asked her how she feels. Seems she is feeling better. (I already suspected because she has been more active lately.) She even walked home all the way from church this morning. And makes good use of the bus system.

When I came back downstairs I had to realize that my opportunity for moving any project forward had long passed. Poof!

So the boy and I watched an episode of „Deep Space Nine“ and then there wasn’t much left of the day.

So, only a bit of writing, no music and no sewing. I did make a plan for the upcoming week, though.

But there will be another week and I can do more things then. I hope.

Oh, and I had another potential new student contact me. She is coming through students of my husband. This is all very exciting. And today an actual new student will have her first regular lesson. I’ll get to teach recorder again, something I haven’t done in years.

Other than that there will be running, or rather wading through the sticky snow, I suspect, and teaching and I want to prepare my lessons for the week (new feature – I want to get away from all that spur-of-the-moment-last-minute stuff).