I slept almost until the alarm. My sleep is definitely getting better again. This not drinking much alcohol does seem to make a difference.

I spent a cozy hour in bed, then made breakfast and when my husband showed up at eight I was deep in migrating my bullet journal. I started a new notebook a few days ago and now I’m finally all set up with the new one.

I started uploading the podcast video around seven. When it started it said that it would take approximately 45 minutes. The video was fully uploaded around two in the afternoon. Note to self: uploading to Youtube goes much faster if it’s not the weekend or evening.

My husband had a ton of stuff he wanted to talk about, he is still thinking about getting a new guitar and if so which one. And he wanted to tell me about the amp he worked on during the week. And we talked about his blog and the recordings he did in August. And then the boy came down for breakfast as well and he needed help with his new speaker setup. He needs a new cable and we weren’t sure what to get and where to get it.

All of that took a lot of time and so my husband went running too late. And I left even later. I tried running in the woods again because it was raining and I thought the paths would be muddy but clear of ice. Yeah, not so much. No idea how my husband runs on that but I just couldn’t and so I took the next path out of the woods and kept to the streets again.

And I forgot to take a picture.

I came back home and immediately chopped vegetables for goulash. By that point my husband was rather exhausted and had a hard time with all the moving parts of cooking.

Which resulted in him burning himself twice and about a quarter of the pasta either burnt or on the floor and between the stacked wood.

Lunch was late but tasty: 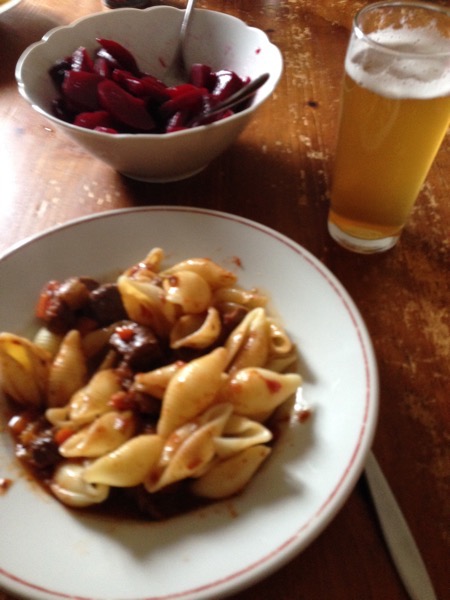 We agreed on new rules after that: on Saturdays we need to go running no later than 10.30 and there will be no complex dishes. Because Saturday is the day where my husband does longer runs and that with getting away later means that he is totally weak and almost dizzy when it’s time to cook. Especially now that he is having breakfast earlier.

Then I surprised myself by doing the dishes right away. I was afraid of the fabled Saturday slump and determined to evade it this week. Then I went over to the annex, saw that the podcast video had finally finished uploading and published the podcast and announced it everywhere.

Then I slumped a little but made some music too. And then I cut the fabric for a pair of yoga pants: 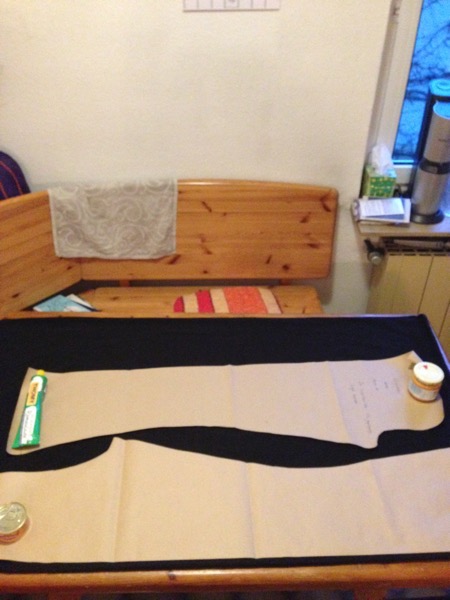 Hung up a load of laundry and watched some Star Trek with the boy while working on the Sweet Pea Posy blanket.

I wrote for a bit while my husband was playing drums and then guitar in the basement and turned the lights out early.

As I said, good day.

Today there will be yoga and some sewing and more writing and some music. No idea what else but we need to order a new cable for the boy and a birthday gift for my husband’s uncle and aunt.

And I will look back at the week and make plans for the upcoming one.