First of all, sorry for posting so late yesterday, I thought I had published the post but I have trouble accessing my blog and it didn’t go up until 8.30 at night.

And I won’t write much this morning, I have a pretty dense day ahead.

Yesterday I woke up from the alarm after not sleeping enough (my own fault, I read for too long), and then the whole day basically went sideways.

Until I spent most of the day hanging around feeling bad, and paralyzed and anxious and hating the fact that I didn’t make progress on anything.

I did go to the health food store, though, and to the tea shop, The boy had surprisingly little school and he and a friend popped in and out of the house, there was food: 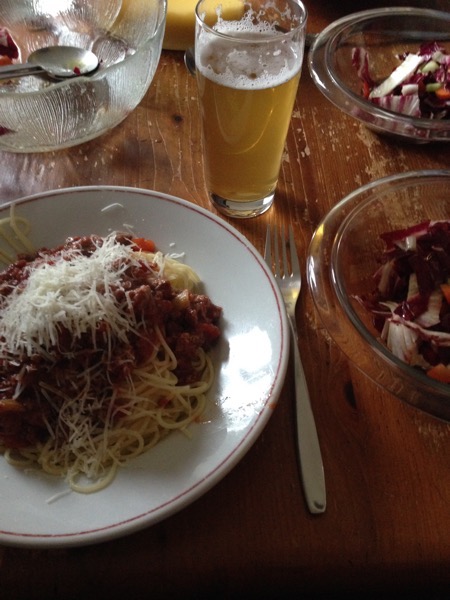 There was a whole lot of sitting around after that, feeling bad for not doing anything at all, there was more eating (let’s just say there are no potato chips in the house anymore), there was some reading, there was quite a bit of – rather pleasant – teaching and then the funniest thing happened.

I looked at the pattern for the Sweet Pea blanket CAL, wondering why it was open to the second part of the pattern, not the third part I had almost finished that morning.

Well, see if you catch it: 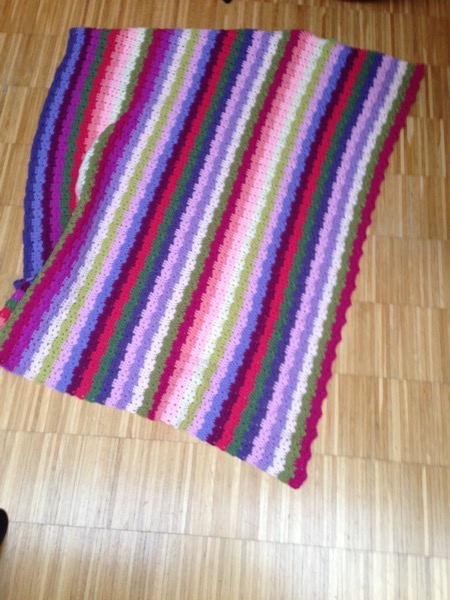 The start of the blanket is to the left. If you look properly you can see that the last twelve stripes or so are a repeat of the ones that came before. This shows the blanket with three stripes already ripped back.

I actually spent all my time since Friday crocheting part 2 for the second time instead of part 3!

I’m still grinning, this made me laugh out loud and lifted my mood instantly. No, I have no idea why, it’s just so absurd. I was very pleased with myself for getting this done and a little wistful that I’d have to wait for at least a day before being able to continue.

Well, looks like I have more crochet in my future than I thought.

I spent my evening in front of a webinar (the one I had planned to attend turned out to be one I already had watched twice, very fitting, so I switched to another one that I had planned to rewatch anyway) ripping all those stripes back and later today I will start part 3 for real.

There will also be running and food and quite a bit of teaching and me trying to play catch-up and another potential new student and then I’ll leave the house an meet with actual, live people in a restaurant and I’ll get home too late and won’t get enough sleep.