I woke up from the alarm and wrote morning pages. I did not manage to write before breakfast yet again. It was raining, so now snow-shoveling.

Had breakfast with the boy and then my husband showed up. We were pretty early.

I did attempt to run but it was mostly walking and sliding in the end, the ground is hard to run on at the moment: 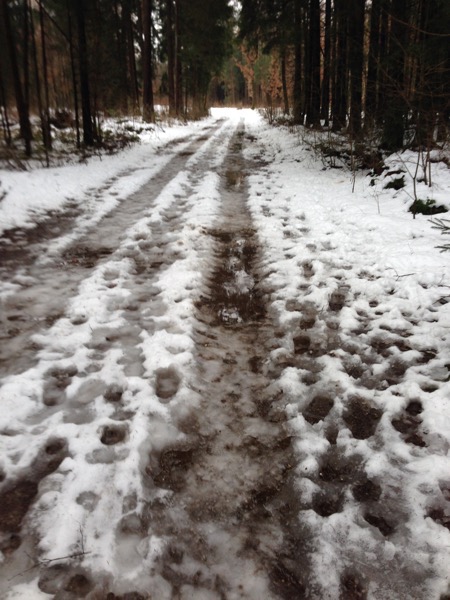 I only did 3.6 k because of that. I was super-slow but it was fun. And I really like my new running shoes. Unfortunately I forgot to waterproof them beforehand. But my feet only got totally wet when I was already halfway done.

I came back and didn’t even help to cook. My husband had skipped running in favor of errands, recycling and moving wood in from outside. I did manage to get a pile of boxes to the recycling bin as well. It’s not much of a detour on my way to the woods. There was chili for lunch: 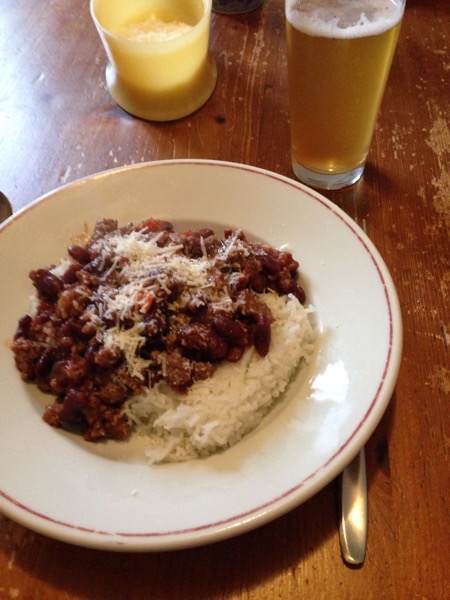 I also finally installed the blogging software on my husband’s computer. His OS is so old that I had to find an old version of the software and the old registration key. But it works. I should update his OS as well but that will probably take ages.

I also decided to test Affinity Photo. I have been trying to learn GIMP for months now and today I stumbled upon yet another recommendation for Affinity. So I am now the proud owner of the free test version and have borrowed a book on it through Kindle Unlimited. I like the look, it does CMYK which GIMP only does after serious tweaking and it only costs 56 €. Much cheaper than Photoshop. It also looks easier to use but right now I’m still stumbling and fumbling around.

Playing around with that took quite a chunk out of my day. But that’s okay.

I made some music and I taught very few students and then I spent too much time playing Candy Crush. I always think these things are fun but actually it made me rather cranky and irritated. So I deleted the app again. Much better.

Then I ate too much because I was angry that I hadn’t written. Very reasonable, of course. I talked with the boy and a little with my husband and did the dishes. Five minutes later the sink was full again but I’ll deal with those later today.

Today there will be the chimney sweep and the health food store and quite a few students (one of them with her new electrical guitar that she got for Christmas, I showed her how to play „Smoke on the Water“ last week). I am hoping to get some words in and get a few small things done as well but there won’t be much time for those. Oh, and strength training would be great.