Woke up at 5.08 again which was a little too early. Morning pages, and a little writing. My husband showed up when my tea was almost ready, a little disappointed that I had already made breakfast without the wood stove. But breakfast was ready in time.

The boy showed up a little later. After I was finished with breakfast I went and shoveled some snow. For 16 minutes. I only did the sidewalk rather sloppily. I wanted to be back in time to sit with my husband when he had breakfast.

We talked. There were dishes. And I did some laundry. I was actually keeping track of how much time I spent on each. I got myself a new app so I can see where my time goes. Right now the biggest part of my day is housework. I didn’t manage to catch everything, though.Finally, I went to the supermarket. Walking there and back and getting everything we needed. Well, almost. It turned out that I had gotten the completely wrong kind of lasagna. So, after putting all the groceries away I put on my shoes and coat and hat and mittens again and went to two other stores for a different kind of lasagna and a different kind of salad.

My mother-in-law sent me on a quest for a particular kind of khaki but I couldn’t find that kind in any of the stores. The good thing about having to go in the other direction as well was that I could get a bus ticket for Saturday’s spinning meeting.

Then I came back and had put everything away again I helped a little with the salad and setting the table but my husband did all the rest: 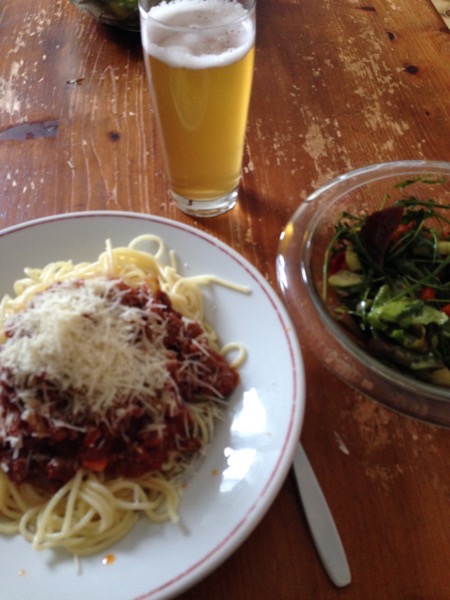 The rest of the bolognese sauce will go into lasagna later today. And there will be more salad.

Then the boy had a sudden urge to talk. He got a fabulous grade on a chemistry test and his math teacher had asked him if he had ever thought about taking a class at university after he had asked her something she didn’t know. So we looked into classes for people who are not university students. Though, studying math is a little like studying philosophy, isn’t it, the practical applications aren’t obvious.

Then I talked to the boy about book cover design at length and we compared covers and critiqued them. Poor thing. He wasn’t bored but might have more practical application for math than book cover design. Then he helped me with the dishes.

I made my way over to the annex after applying makeup and changing into a handknitted sweater, did my singing warmup and ten minuted of piano exercises. Well, almost because my first student was five minutes early.

Taught that student, watched the book cover design course while not really paying attention, waited for the boy who forgot about his piano lesson but I think he was out helping his grandmother so that’s alright.

I taught two more students, did strength training with the boy for thirty minutes, changed into pajamas, did more dishes, lounged in bed for an hour and turned out the light.

Today the boy is giddy to start the weekend early. Because of the snow, all schools will be closed. I’m hoping that that won’t confuse my students. There will be lasagna and the next part of the Sweet Pea CAL (can’t wait!) and it will be the start of the „Knitting Seasons“- thing. I will also write like the wind and clean all the things.

So, a lot of things to look forward to. Plus, a bit of snow-shoveling I bet.