Woke up at 5.30 after a night of plenty sleep and could hear my mother-in-law walking around upstairs. The way she tries to walk real quiet is rather sweet but completely pointless.

Couldn’t make myself write but got up on time, had breakfast, meditated and read the „Four Tendencies“-book. It is really fascinating and is making me question the whole way I’m setting goals and making plans and am going about my days. Exciting! Then I wrote a few words and then my mother-in-law knocked on the door. She has been having bad headaches during the night that are probably a side effect of the antibiotics she is taking so she decided to go back to the hospital.

I got to carry her suitcase down the stairs and got a big list of things to do and whoosh, off she went in a cab.

That was basically it for the day.

I did manage to do yoga, at least, and then I helped to make lunch. We had duck and since I had forgotten that we like to have red cabbage and dumplings with duck my husband decided to make something Asian. With the rest of the leek from the yard. And since I have been preaching about marinating and salting meat way in advance he actually defrosted the duck yesterday and marinated it in soy sauce today. What can I say, most tender meat he has ever made: 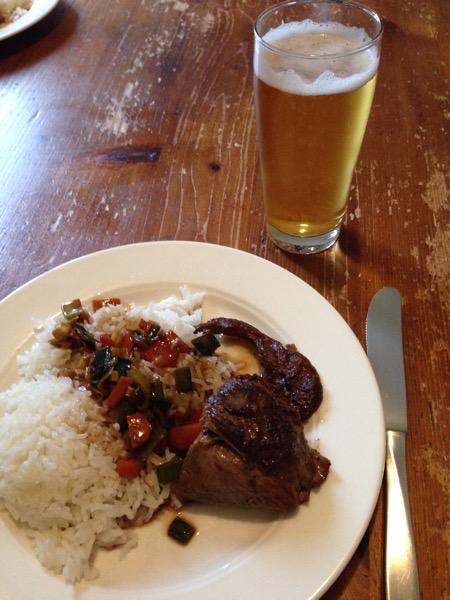 I folded two loads of laundry and put them away and washed and hung another one, I finally vacuumed the old part of the house and then I stalled. Major procrastination happened. I did finish the book about the tendencies, though.

We started watching Star Trek a little later than usual because of ski jumping which my husband likes to watch and that was it for the day. At least I did turn out the lights on time.

Today there will be running and some more grocery shopping because my husband spontaneously decided to have Weißwürste for lunch which means visiting three shops. Three shops that will be pretty crazy, I’m sure. (Bakery for pretzels, butcher for sausages and the health food store for the fake sausages for the boy.)

Our New Year’s Eve plans involve watching something on TV, cheese fondue and copious amounts of snacks and drinks. As usual it will only be the three of us. I’m looking forward to it but not to staying up until midnight. I am definitely not a night owl these days.