I went to bed a little late but woke up around 5.30 as usual. Was tired all day.

I wrote my morning pages, failed to write fiction yet again, had a late breakfast, started reading the next in the mystery series I have been making my way through, and realized that I had forgotten to tell my husband that I was supposed to teach at 11.

He showed up as usual. I told him about my lesson, checked my email, and lo and behold, the student had canceled. (Nobody shows up on Christmas for music lessons.) I wrestled with the Owligan for.a bit. I finally got to start the owls. I’m pretty sure that I don’t have enough yarn, so the whole thing remains exciting.

We made spaghetti arrabbiata for lunch because we all were still feeling full from dinner the night before: 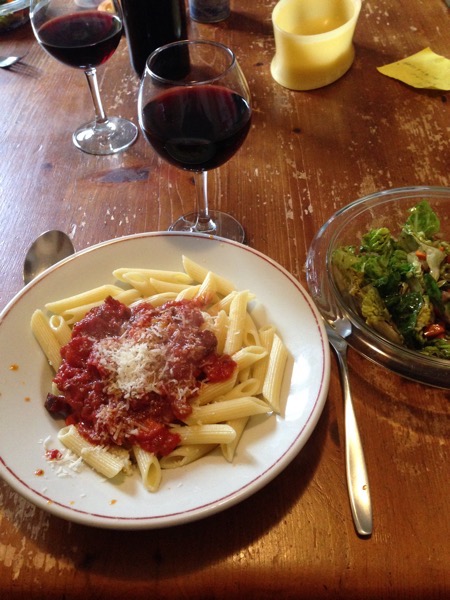 Then I ate too many chocolate truffles and almost fell into a slump again but I resisted. I folded a load of laundry, hung up two (husband had started them) and put the clean laundry away. Then I did the lunch dishes and then I looked for the free yoga pants pattern I knew I had somewhere on my computer (you can get it at craftsy if you’re interested) and I even printed it out.

The plan is to meld this pattern with my self-drafted leggings pattern for yoga pants that actually fit.

My husband and the boy mounted all the smoke alarms throughout the house. It only took a year. The boy was not amused. Then they listened to some Beethoven. Meanwhile I had the pleasure of calling my mother on the phone. She complained about me not calling often enough and a few other things. I need to make a note to call her more often, I guess.

I gave him the truffles and refrained from telling him that it was indeed the forty minute training. Instead I told him we’d do ten sets of three. Which at one minute per set for four different exercises does amount to forty minutes of training but I was hoping he didn’t do the math. He did eventually but then he went through anyways.

The was Star Trek and the plying of the first part of the advent calendar yarn. Beautiful. Well, apart from when I set up the wheel wrong and spent twenty minutes plying in the wrong direction: 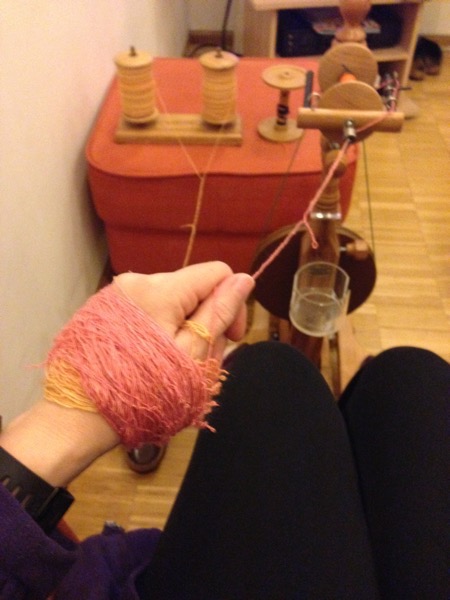 This is how much yarn I had already plied. It was looking horrible, stringy and hard and twisty. Winding it around my hand like that took some time too and then I plied it the right way after that and that was my spinning time for the day. So there will be more plying over the next few days. I keep forgetting that while plying is faster than spinning it still takes more than two hours to ply yarn that took almost 24 hours to spin.

Then there was only very little writing but I did manage to turn the lights out on time.

Today there will be running and all the usual. Maybe I’ll put the yoga pants pattern together and cut it out, we’ll see. I also want to prepare the next podcast episode.