It felt a bit unfair when after going to bed at 9.30 I was wide awake around 4 am. I did try to get some more sleep and my Fitbit thinks I did sleep after that but my Fitbit also thinks that I was still sleeping at a time when I sitting in bed with the lights on and reading.

I did mange to write morning pages and not stay in bed for too long.

No writing in the morning. (Spoiler: no writing later as well.)

I did start the first sleeve for the Owligan because I want to find out how much yarn the sleeves will take. So the body is just sitting there right now while I’m doing the sleeves. And the I ripped the stockinette part back in the evening because I manage to knit the whole thing way too tight.

I did talk with my husband about how bad I feel for not having reaching my goals for 2018. That conversation was actually helpful for a change and we found that we aren’t as different concerning planning than we like to think.

Then I did half an hour of yoga while my husband reheated the leftover lasagna on the wood stove and made red beet salad.

We had an extremely early lunch (which suited me perfectly) and the boy got back home right before then. He was rather tired from not sleeping at all. That’s definitely not recommended and he reacts to sleep deprivation as badly as I do.

Lunch was very good. Not quite as good as fresh but way less work: 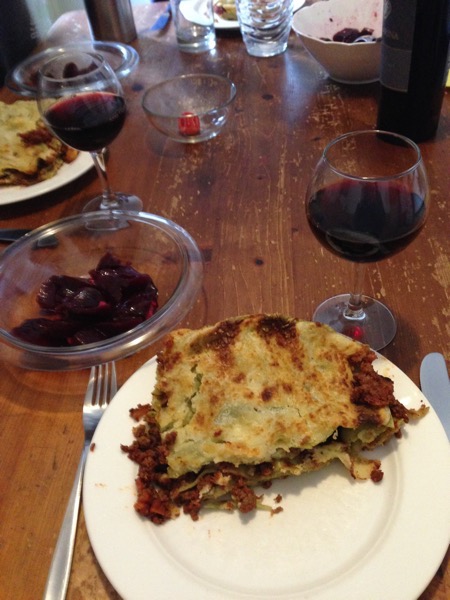 Then I was totally expecting another afternoon slump but having lunch early was rather helpful in that regard. So at the time when I’m usually just sitting there, unable to do anything productive, I found myself folding laundry, hanging up a load and starting another one. And then I did the dishes.

I finally managed to make myself wrap the Christmas presents. All of them. Which took me thirty minutes in total. Five minutes per present. Yes, I measured that. I want to know for next year. Maybe that won’t make me dread it so much.

Then I actually managed to pack the two packages I needed to send out before Christmas, print out labels and get them to a place where they will get mailed some time tomorrow. Phew. Doing all that, including finding boxes, took another 50 minutes.

I also wrote an email that I had on my list. I started trying ‚rapid logging‘ according to the bullet journal method (I really like the book but the website is pretty neat and helpful as well). Which means not only making a to do-list but also jotting everything down that’s in your head right now. Yesterday’s list got pretty long.

Then I asked the boy if he wanted to watch Star Trek early and he was game. We ended up seeing two excellent episodes. I did spin my advent calendar fiber and restarted the sleeve, this time knitting more loosely.

Then it was time to plan out my week, defrost the boy’s birthday cake and get myself to bed early.

Today is the boy’s 16th birthday. It is also just a regular school day, so not a lot of celebration today. There will probably be homemade pizza for lunch. I’m hoping we’ll get that ready in time for his lunch break.