I woke up from the alarm, managed to roll out of bed almost on time, had breakfast, watched some youtube videos (yeah, no idea what is happening) and when my husband showed up for his breakfast I started a new cardigan. After carefully measuring all the various gauge swatches I decided to go with the yarn held double and the 8 mm needles after all.

Knitting something that chunky is, um, challenging. But there was no way I was getting row gauge without holding the yarn double and I ended up almost on gauge. Did not get stitch gauge but with what I got size one should fit me in the end.

I also decided to try to keep track on how many hours will go into that cardigan, just because I’m curious. I might run out of yarn before finishing the thing, so that will be exciting. (I have plans to knit the body up to a certain point, then finish the sleeves, and then guesstimate on how much yarn the yoke will need in order to decide how long to make the cardigan. 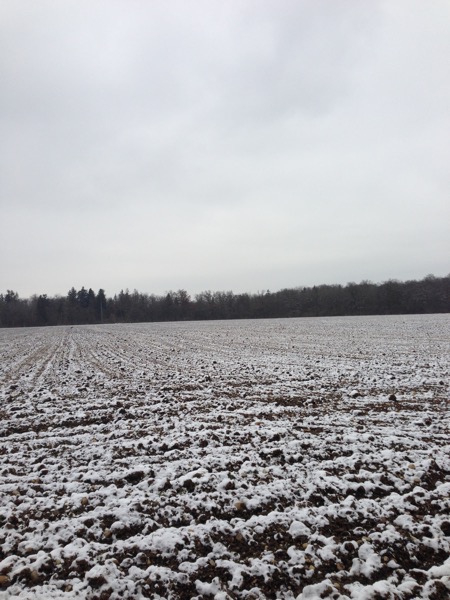 It was way more lovely than it looks. I’m still in lazy mode, apparently and couldn’t be bothered to run a lot, so there was quite a bit of walking and I only did 5k.

I met my husband just before my halfway point and expected him to be home way earlier than me but when I had turned around I saw him standing there talking to a woman we often meet. She walks her dog at the same time that we run.

It turned out that they had been talking about running shoes, and specifically barefoot shoes (my husband was showing off his winter running shoes) and she had told him, „There is this woman I meet often who is wearing Vibram Five Fingers. She is nice.”

To which my husband replied, „Oh yes, I know her, that’s my wife!“ (Which implies that he thinks I’m nice too, doesn’t it?”

We all stood around a talked a bit before heading back home. My husband always meets people on his runs and talks to them often whereas I only nod and smile while passing them, earbuds firmly in.

I was pretty moved by the fact that she thought I was nice. Even though we never talked before. I’m still expecting people to not like me unless I make an effort. And even then.

I guess several decades of being an outsider and bullied (two things that often go together) have left a mark.

My husband and I ran together for about three minutes or so before I started walking again and saw him take off in the distance.

Back home we worked on the lasagna.

Now, my husband had already made the bolognese sauce on Thursday which was a crucial step, and then we just worked as fast as we could while talking and cutting things. Turns out we are able to cook lasagna without fighting after all.

After the big meltdown of last week we found out that my tactic of only ever sitting at the table cutting things and waiting for instructions in order to not be in his way was not helping, and that if I think as if I were cooking the whole dish (even if I’m only helping) and if I don’t restrict myself to only ever leaving the kitchen bench when my husband is not in the room really helps in a) making the cooking faster, b) making my husband less confused, and c) not making him feel like all the responsibility lays on him.

Another first was that I did not waffle endlessly on how to put the lasagna together. Usually I can’t decide if I should start with bolognese or béchamel and then my husband always insists on adding fried eggplant (which the boy and I could do without easily) and then I always forget to add it.

I told my husband he needed to praise me for not waffling and for not forgetting the eggplant and he said, „See, that is what happens if you just start.“ Yeah. I had to disappoint him. What I did was take a moment to think the whole lasagna through before starting. I made a plan. I would start with bolognese because the béchamel needs to be on the top but if there were a lot of béchamel I would start with that instead. 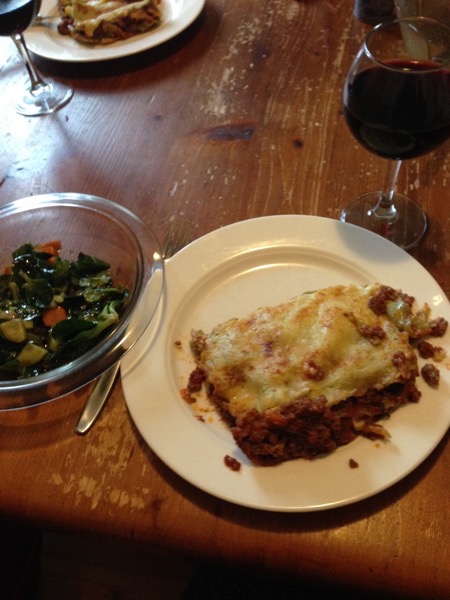 The wine was wonderful as well. The day before we went to the nice wine shop after lunch and chose a few bottles. Because we’re trying to cut back on spending we have been getting a lot of cheap wine lately. Which is alright for everyday use but the expensive wine is just a lot better.

And then I went into an extended Saturday afternoon slump. I have a nice, fat to do-list that sits there still unchecked.

One reason was that the boy was preparing for his poker night with friends. He wanted my advice on what to take and he needed money to buy sweets and a birthday card and then he needed my advice on what to write on that birthday card (though I have to say that his idea about what to put on there was much better than mine), and then when I had finally psyched myself up to either do the dishes or take a shower at around 3 pm he showed up saying, „I’m taking a shower now.“ Which meant I could do nothing but watch more videos, of course.

I finally managed to take my shower at around 5 pm, then spun the advent calendar fiber (more videos, I’m in full „learn all about goal setting and planning the next year“-mode), then changed to watching the „Salt, Fat, Acid, Heat“-documentary some more because my husband was done with watching ski jumping and then my husband and I dealt with the epic pile of dirty dishes from lunch.

On the bright side there is still enough lasagna left that we are all set for lunch today.

Here’s a bad picture of my fiber: 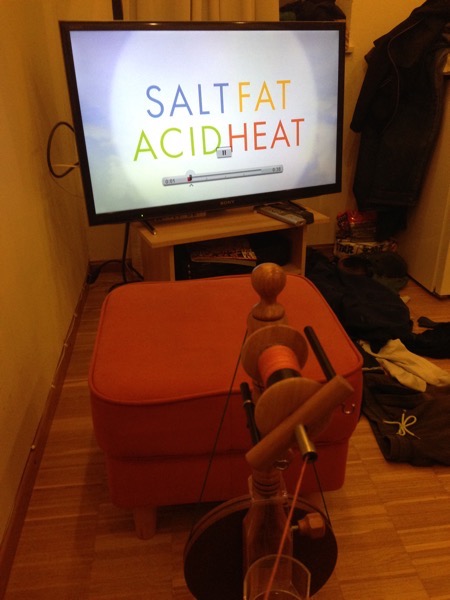 The lighting in that room is awful and yes, there are clothes lying on the floor. My husband and I don’t always agree on what to do with running clothes afterwards.

I tried writing a bit but felt completely stuck and exhausted. I guess I might need some more sleep before attempting writing again.

So. Today I will do everything I didn’t do yesterday, of course. Which includes wrapping presents (it’s getting ridiculous and stressful by now) and writing and baking cookies (I hope) and maybe even yoga.

The boy will come home at some point and then just conk out because he deals with sleep deprivation about as gracefully as I do. There might be some watching of Star Trek and there will definitely be more spinning. I thought that I would have to ply the first part of the fiber this weekend but then I remembered that I own two more of the lace bobbins which means I can leave plying until I have finished all the spinning.

It seems that not writing fiction makes for wordy blog posts. And now I don’t know if I should apologize for that or not.