I woke up just before the alarm. No writing but I knew if I didn’t get myself back to the novel that day things would be dire.

My plan for the writing involved yoga and writing.

I knitted on my sweater during my husband’s breakfast and while I first had the feeling the sleeve would never end I was then very happy to see that I had only eight rounds left before the ribbing. Then I tried the sweater on. And found something strange. You need to know that this sweater has different instructions for right and left sleeves and the one I was knitting was the right one. When I tried it on I was slightly confused. Then I looked up that it was indeed the right sleeve that I had been knitting. Let me show you a picture: 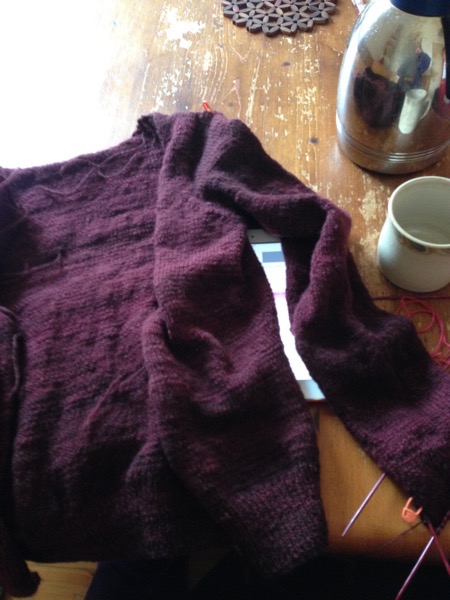 Do you see it?

The sleeve is on the right when you look at it from this perspective but the right sleeve – should be on the other side. I briefly thought about finishing the sleeve, putting another right one on the actual right side and see if it would be noticeable but then I realized it would be bugging me forever. And about three (maybe four) hours of knitting are not worth being bugged forever.

I’m happy to say that the sweater seems to fit so far and that picking the stitches up for the sleeve the, um, fourth time is much easier than the first. Or second. (The trick was to pick up five stitches for every six rows, by the way; and the pattern is Stockbridge by Ysolda Teague).

Then I found that we were totally out of beer that I like to drink (we only had two kinds left, one that doesn’t agree with me – even though it tastes great – and the other one does slightly weird things to my digestion as well. So I decided to swap yoga for a walk to the gas station at the other end of town so I could buy beer. And chocolate bars. Of course.

There was goulash for lunch: 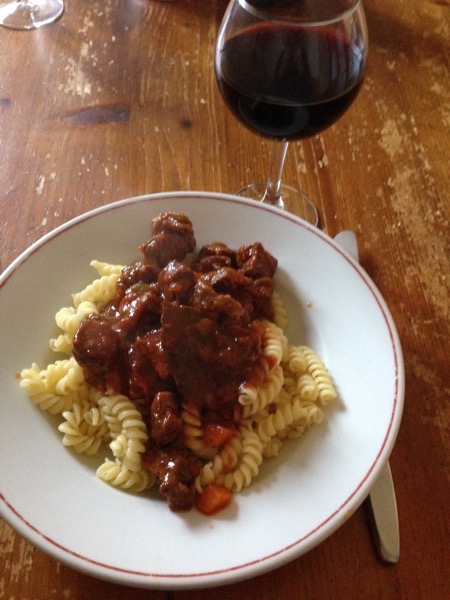 Then I spent some time seriously procrastinating about writing yet again. And the boy really didn’t feel like doing his massive homework. He had German homework that all in all took about six hours to do. So we both sat down at the kitchen table with a pomodoro timer and did a kind of ‚write-in‘: 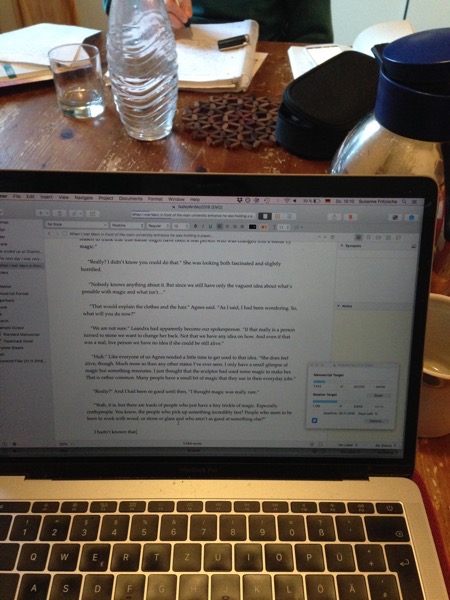 Tough. But not impossible.

We ate dinner in front of TV and only watched one episode of ‚Deep Space Nine‘ (the episode was ‚Past Tense 2‘ from season three). We really enjoyed that one. The boy then decided that he wanted to watch another one but I was adamant. He still needed to take a shower, do his Latin homework and study for an economics test. (Yes, he really should have done more on Friday and Saturday; I should have written something on those days too – we’re working on it.)

I wrote some more words and did a huge pile of dishes. With all the procrastination and the writing I had completely forgotten to do the lunch dishes, ahem.

Today there will be – more writing, some teaching, no run. I might go for a walk because no exercise at all is no fun but I don’t think I’m back to running form again.

Most important will be the writing.