Not sick either. I’m still in that in between place.

Woke up rather early, read (no writing), made breakfast. Was happy to see the boy and help him to squeeze two more things into his backpack. Got ready and left for my doctor’s appointment.

I was in a funk, full of anxiety over nothing. Not even the boy’s trip, I’m thinking it was a combination of hormones and having to leave the house early.

The train was twenty minutes late which made me five minutes late for my appointment. I barely had to wait and everything was fine. I was still off, and I think I confused my doctor a bit. He’ll live.

I went to the nice health food store, got almost everything I wanted and walked back to the train station to get back home. And then I waited for the train. And waited. And waited. Apparently there had been an incident in Munich earlier and that had resulted in big train chaos. I have to say I was rather happy that I had told the boy to take a train earlier than planned. And I was even happier when I was standing on the platform and getting his message, „Am on the train.“ That was for the big one, the one bringing him all the way to Erfurt.

After an hour of waiting I was finally back home. And my ground beef and lamb was still miraculously frozen. Good thing I took an insulated bag and a cool pack.

Then I helped to make lunch, past e fagioli: 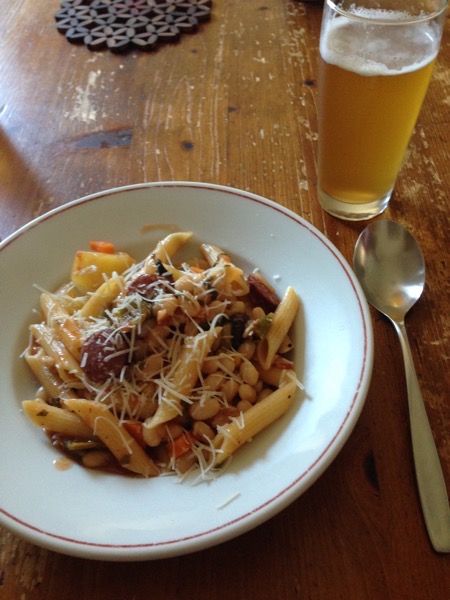 Very good. And this time we could cook the sausage in the soup instead of separate because the vegetarian in the house is absent.

I took a pain pill but it didn’t help, did the dishes, ate some chocolate, folded laundry, told my mother-in-law that the boy had reached his destination in one piece, practiced a little and taught two students. Tried to do something productive and failed. Taught another student.

That was basically it for the day. Went to bed early and hoped for a better day today.

Today there will be the usual Friday cleaning. My husband and I will have lunch at the Greek restaurant and then I will teach all.the.students.

And then the weekend. The rather busy weekend.