Woke ups early but didn’t want to write because I was really slow the last time I did that. Which is an absurd excuse because slowly written words are still words written.

Breakfast. After which I still didn’t want to write. I don’t know what I was thinking but I didn’t really feel up to anything.

I did manage to do my weekly cleaning in time and even vacuumed the annex before my husband was back from running. We did make pizza and it was great, as usual: 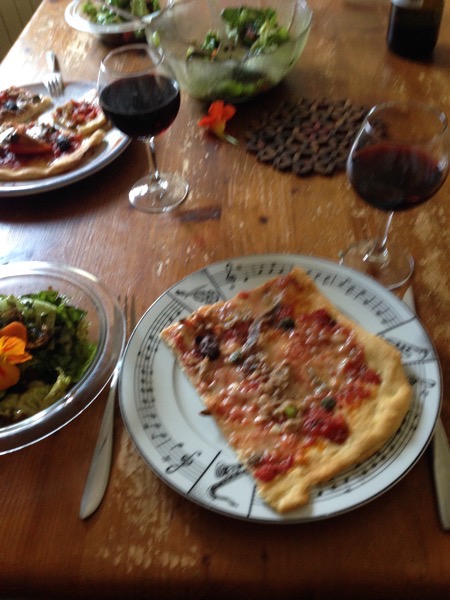 We were a little late with lunch but the boy came home later still so he didn’t eat with us.

Then I didn’t have enough time to do the dishes as planned so I sang and waited for my first student. After her lesson I went back to the kitchen and only managed to sort the dishes instead of washing them. I did play the piano for ten minutes, though. Then I taught two students. Went back to the kitchen (my calendar said „sew“ at that point), did the dishes already, and right when I was debating whether twenty minutes was enough to start setting up the ironing board my next student rang. Twenty minutes early. So I taught her. The next student was only five minutes early so I spent the time between the two trying to get my BIL’s birthday present on the way but I was interrupted.

Taught the last student of the day. Watched one – excellent – episode of Star Trek TNG (the last one with Wesley Crusher!). Ate some cheese (bad move), started writing this post.

Still hadn’t written anything. I did finish reading „How to Write Pulp Fiction“ which is rather entertaining and has a few nice hints but I guess I have read too many books about writing fast by now.

I did decide to skip the webinar because I realized that I had attended one in June by the same guy covering the same topic. I did review my notes, though. That is where a bullet journal comes in handy. Once I knew the date (from my emails) I could look into the index of the relevant journal and had the whole thing ready to read just like that.

So. No sewing yesterday and no writing. Serves me right. Writing first thing is always the best plan to follow. Because writing later is vulnerable to all kinds of disturbances.

Oh, and speaking of disturbances, I got a letter telling me to pay 80 Euros for a newspaper subscription that I never wanted or signed for. Again. I sent them an email with the emails attached that had been written a couple of weeks before. I just hope that this will be the end of it. Imagine getting a letter telling you to pay for something you never wanted. With your first name spelled wrong. Huh. That threw me off all morning. I am still working on my stoicism. Saying that I’m getting mixed results would be exaggerated.

So. Today there will be running and some kind of food, I’m sure and also I’m really looking forward to moving the dress along. Sending the package off to my BIL would also be a very good idea. And I would like to watch some more Star Trek with the boy as well. Oh, and write, of course.