Since I had turned the lights out around nine the night before I woke up at five.

For once I actually did write first thing in the morning. Okay, second. Still. I wrote before leaving the bed.

The boy apparently liked going to school ten minutes earlier than usual the day before and has decided to do this everyday. (Why yes, I had been suggesting that maybe going a few minutes earlier might make mornings less stressful for years. What do I know.)

So I had time to write some more between my breakfast and that of my husband: 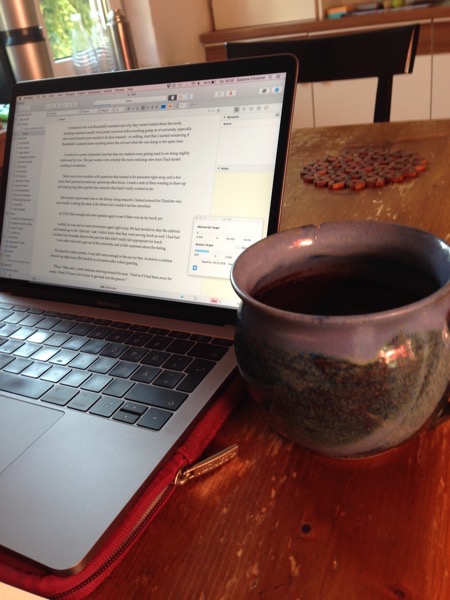 I decided to work on the crochet blanket while he was eating because it was so cold in the house. I also decided to turn the heating on, at lest in the old part of the house. The annex heating is dripping so we better leave that off until it has been repaired.

Then I went to the pharmacy, the health food store again (our grocery list discipline is seriously lacking), and to the bike shop. Where I not only got my bike back with a new lamp and stand but I also remembered to get a new pump. I spent loads of money today but I have to say that small things like proper lighting on bikes and a stand that doesn’t have you lifting the whole bike with all the groceries for a week on it do make my life much better.

We had a really nice lunch and the weather was warm enough to sit on the porch for it (figures since I turned on the heat): 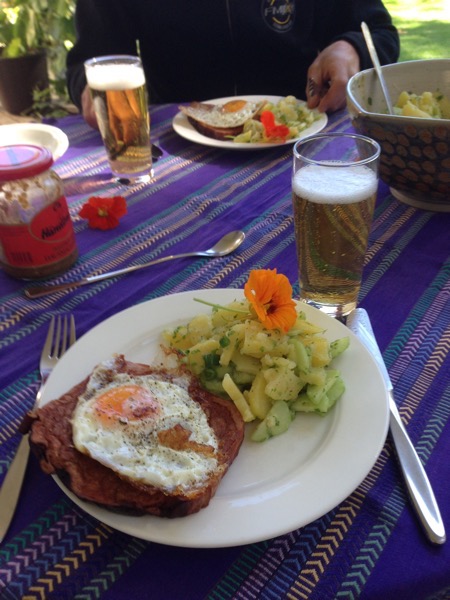 Then I ate chocolate and fell into a slump. The two might be related, or maybe they aren’t. I did manage to pull out the sewing machine and sew some more. The dress is starting to look vaguely dress-shaped, I have a top and a skirt-like thing and facings.

Then I taught a student. And then I sewed some more. There wasn’t time to get the iron going to press all the seams open, alas, so that will have to be left for another day.

Then I taught some more. My last student didn’t show, weirdly enough. And I had the second cancelation this week (one yesterday and one for tomorrow) because of the student having a cold. What can I say, it is Oktoberfest-time…

And then (and that was certainly one of the highlights of the day, a student of my husband’s came for his lesson and when he closed the door he was holding the door handle ins hand. This has been happening every few days for years now. We tried fixing it but couldn’t get the cover off. So we just put the handle back ever so often.

Now this student happens to be a carpenter. He started by saying that you just need an Allen wrench to fix it. Ha! As if. We’re not that bad with mechanics. But. Having more experience with things like this he managed to use my husband’s tools and fix it. No more students being unable to leave because they can’t open the door! No more small kids afraid that they have broken the door! A thing that has been on my list to have fixed for ages was just taken care of.

Since the house is still rather cold I went to bed early.

I have to confess that I am actually hoping to finish the current novel (book two in the Eva Mandel series for those of you following along) by the end of October. Which is ridiculous. It would mean to write 2,500 words per day. The first book went extraordinarily slow with an average of 480 words per day. 2,500 might mean 1 1/2 to 2 hours of writing each and every day.

But I’m trying to use the deep want of writing something else for energy to make this one go faster. And with all those students canceling I should be able to find an additional thirty minutes in my day here and there. So we’ll see.

If I extend my deadline to mid-November it would be a more reasonable 1,700 words per day. And yes, I am perfectly aware that a few years ago writing 1,700 words per day every day for a month left me totally depleted of energy with my whole life falling to the wayside. But that’s the great thing about practice.

And if it doesn’t work I’ll change things up. As usual.

Today there will be the cleaning, and the pizza, and quite a bit of teaching but not as much as I hoped for. Then the watching of Star Trek and then another webinar, “3 Steps to a Bestselling Author Platform“. Yeah, I don’t know why I keep doing this when I’m still at stage 0: ‘write book’. And all the stages that come between ‚finish book‘ and ‚publish book‘. I mean, I don’t think things will go the bestseller-way if I only throw up a PDF on Amazon. (Actually I don’t think this book will become a bestseller. Not because I’m making myself smaller than necessary, only because a) I am only starting out, and b) the whole thing as is can only appeal to a small niche-audience.)

So I’ll be watching the webinar like a TV show, mostly, but with my notebook and pen ready and focus on a) writing the book, and b) reading „Let’s Get Digital“ with a pen and make a list of next steps for book one.