Woke up from the alarm after nine hours of sleep which is a little weird. It did feel good while I was sleeping but it seemed I never really woke up throughout the day.

I got up late. And the boy actually did remember to send me a message and got up really early. Which meant I was still in pajamas and scrambling to get breakfast ready when he showed up.

I’m not complaining. But I think I maybe should up my game.

Because I felt so sluggish I didn’t manage to write right after breakfast either. Boo.

I did make progress on my husband’s cowl. It isn’t quite long enough yet, though.

I phoned my ob/gyn to ask for my prescription renewed. Something I had been procrastinating about for two weeks or so. I do still have pills left until the end of next week or so, but still.

Then I went out to the bike shop and ordered a new front light and stand. They are swamped, apparently, so I will have to wait until 5 pm this afternoon before I can have my bike back. Since I’ll be busy at that time that means I’ll get it Thursday morning, just in time for grocery shopping. The young man whom I talked to even changed the 35 € lamp to a 15€ one when he realized that my dynamo was different than he thought.

I bet he hasn’t seen a bike this old in ages. I bought it in 2003 which I remember because there is a picture where my husband sat the boy in a striped onesie in a basket on the carrier.

Then I went on to the health food store to buy less groceries than expected. Since the fridge is still full to the brim I guess that was right. (Funny, how the cheese is still sitting in the fridge a week after I bought it. Seems the binge-eating got better. I advocate brushing your teeth right after work. Well, in case you want to skip dinner.)

Then we had risotto for lunch. Very, very yummy, and very fitting for the cold weather: 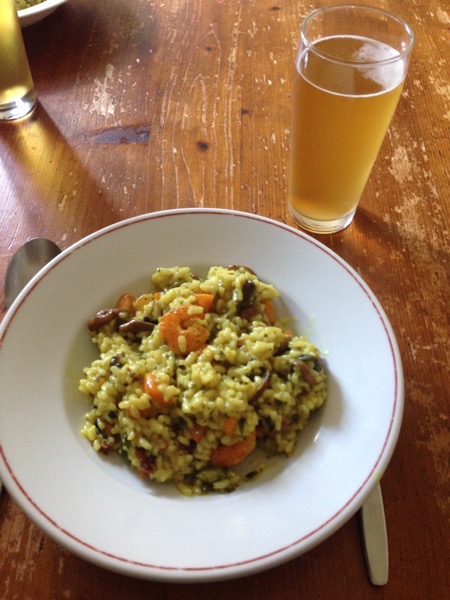 And then I fell into a bad slump. All day I had felt like I had a headache, only without the pain. I decided to take an ibuprofen right after lunch and I think it helped. About half an hour later I felt like myself again. I did not do the lunch dishes (there weren’t many) but I did fold a load of laundry and put it away. I did not make any music, and I still hadn’t written anything. More boo.

Then there were lots and lots of students, one after the other. I inadvertently let the boy wait for almost half an hour when I didn’t finish my last lesson on time. My student and I were talking a lot and I didn’t think he would be on time without me reminding him. Oops.

So no strength training because it was already so late.

My husband did all the dishes after dinner which I really appreciate. He and the boy had leftover risotto and an omelette for dinner and afterwards all I did was dry a few forks and knives.

Then the boy wanted to talk to me, lots.

And then I still had to write my daily 25 minutes.

Today there will be running and only two students and some sewing and writing and music, and a little less other stuff.