My plan for the day had been to go running and tackle one of the big scary projects I had looming.

I actually managed to write for fifteen minutes in the morning, so that was good. And I spent quite some time reading one or two of the books on design that I got, so that was good as well.

Then the boy showed up for breakfast at the exact same time as my husband. We were both shocked, I can tell you. Apparently, he had woken up thirsty. I even forgave him for showing up in pajamas.

My husband then proceeded to tell me that today would be the prefect day to go swimming. Or rather the only possible day until next year.

Which meant that I had to record the podcast yesterday instead of today. Oops.

When I had gotten out of bed it became very clear that I wouldn’t be running at all. My muscles were so sore still from our hike on Monday that I could only hobble around the house. Slowly. No running.

I did weave in the mystery shawl’s ends, so that was good. And managed to weave my last skein of sock yarn that isn’t white and start a new pair of socks which was very good.

Even though we had decided to eat fish that day my husband had pulled out some ground beef and we had tagliatelle bolognese. And salad. 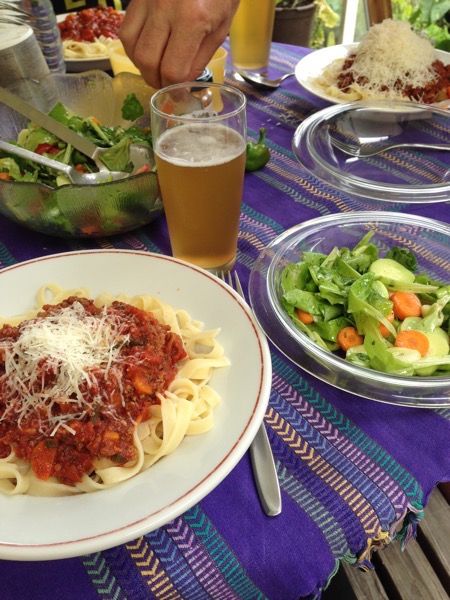 It was even cool enough to eat outside.

Then I had to procrastinate on recording the podcast for two hours or so, and then I got finally ready to record it.

Recorded for an hour, trying to make sure that there would be enough visuals for the people watching on Youtube and no awkward pauses for those just listening to the audio.

When I finished and tried to save everything I found that I had forgotten to click the record button on the video.

Thought about making this episode audio only.

Started pre-production but stopped after half an hour or so because I was somewhat exhausted at that point.

The boy had spent the afternoon at a friend’s house and came back almost in time for dinner. Even though we hadn’t talked about when he was expected home again.

Procrastinated about my „learn how to draw“-lesson and decided to start today instead. (Yeah, because it will be so much easier today than yesterday. Sure.)

Today my husband and I will go for a swim. If weather permits that will include a 1 1/2 hour bike ride before and after. We’ll leave the boy to fend for himself which usually means giving him money for frozen pizza.

That will probably be it for the day. Of course, my new swimming goggles did not arrive in time. They were supposed to arrive from the UK a week ago. I’m really, really nearsighted and these were supposed to correct that.

And I know that that is a very first world problem to have.