Woke up from the alarm. My goal is to go to bed so early that I’ll wake up without it but that might take some time.

Managed to get to the dentist almost on time. When I left my husband wasn’t up yet and I didn’t have the time to leave him a note. Later it turned out that he was rather confused. Especially since I had left the living room window wide open.

My cavity was filled in quickly. It wasn’t exactly fun but I’m a big girl. Then I went to the bakery and the health food store since I was already out. And I knew that we were out of a few things again.

Went home, explained to my husband where I had been and sat down to knit. I even started reading a romance novel because I felt I needed a day off from everything.

When we talked about what to make for lunch it turned out that we were out of other things as well so I decided to go grocery shopping after all.

It is really hot at the moment and I was really tired and exhausted and my body is fighting the infection so that was fun.

Lunch was rice and dal again. (My husband said, „I could make chicken as well.“ I didn’t want to add anything. I just wanted something easy and soothing.) 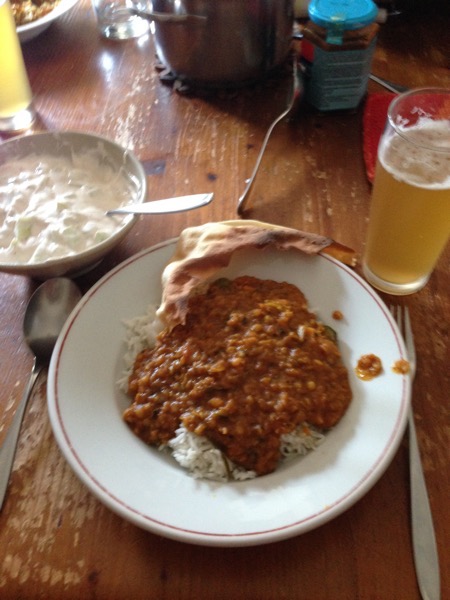 I had big plans of writing and making music and sewing but found that I was just too low on energy to do anything.

So I sat and knitted and read and went online.

Taught a student at five and another at six, sat down with the boy to watch Star Trek and went to bed early.

I’m hoping for a bit more writing a sewing today. There will be no errands and no leaving the house. I will sit here with my foot up and rest.

I also signed up for not one but two webinars today, one about developing a daily writing habit and the other about kicking the inner critic to the curb. We’ll see how that goes. I’m planning to use the first one to card more merino. During the second one I’ll probably take notes like crazy.

And of course, listening to those will mean that I’ll be a totally different person afterwards who gets up in the morning and sits down to write with a big smile on her face.