Woke up from the alarm after not sleeping all that well. I shouldn’t be whining, though, because I almost got enough sleep.

My husband showed up a little earlier than usual after the boy had done everything too late so my meditation got cut short. (Shrugs.) I decided decades ago to be okay with that. I learned how to do mindfulness meditation at a time where the boy was still a toddler and there was construction going on on our roof. The rule is that if I get interrupted that is the gong that signals the end of the meditation. (Surprisingly the boy managed to get to school on time if just barely. He must have biked in record time.)

I forgot about my dental cleaning twice but still managed to get there on time with brushed teeth. I got a lot of praise for my dental hygiene (which is a wonderful but somewhat weird feeling for someone who struggled to get into the habit of properly brushing her teeth for decades and then took some more years to actually brush twice a day instead of once.) It was pretty clear that getting a proper cleaning at the dentist’s should take place more often than every four years.

I also got nice pointers on how to improve my flossing and such and it turns out that I need a filling. One of my back teeth has caries where the tooth and the crown meet. The dentist is willing to try to fix it with a filling first. So let’s hope that one won’t fall out because I don’t want to pay for another crown.

Then I went to the health food store – mostly for chocolate because my husband had said that he’d go to the bigger and better health food store tomorrow. And I tried to get my husband’s favorite pastries for breakfast today. But they were out. I also bought new toothpaste and floss as one does.

Went home, ate chocolate, did the breakfast dishes and then started helping my husband make lunch.

It turned out that we were lacking key components for lunch. My husband had apparently counted on me going to the health food store regardless.

So I walked back to the health food store again. Which was good in a way because I hadn’t had time to go for my run so at least I got 31 minutes of walking in. Bought needed groceries, stuff for pizza-making and more chocolate and walked back home by way of the bakery. Favorite pastries were out again but I bought something else. 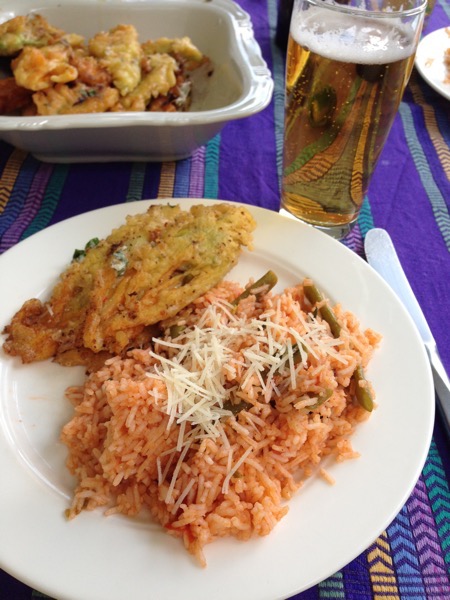 My husband gave one of the zucchini blossoms to his mother to taste and she didn’t like the taste of olive oil.

I only had three students to teach and I was happy to do the lunch dishes beforehand.

My plan had been to prepare the next English episode of the podcast in the morning and record it in the afternoon but I spontaneously decided to screw that plan and just sit there watching the Tour while spinning. Here is a picture of the finished yarn for the MKAL: 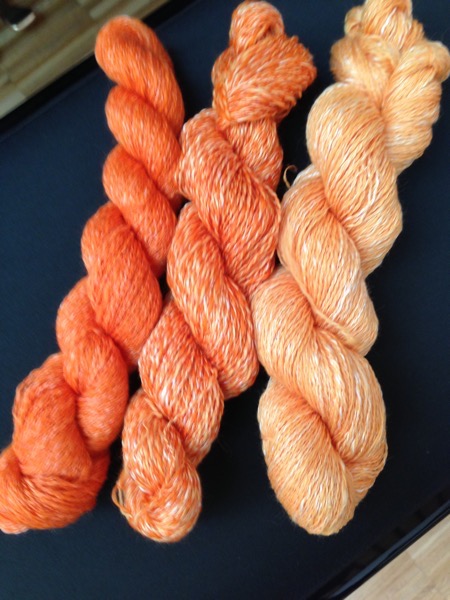 And here is the yarn in progress: 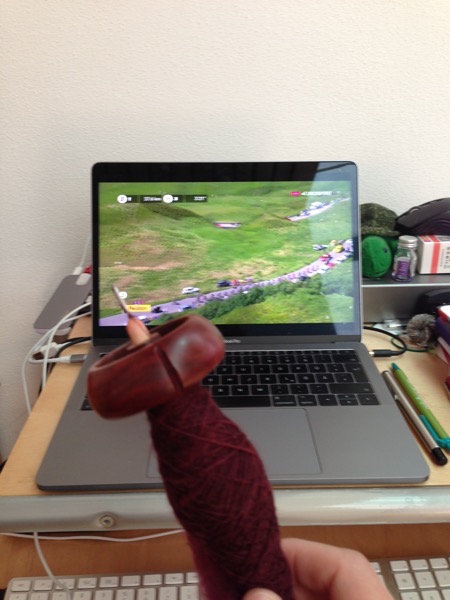 I retired to bed around 7.30 so I could write and read and such and went to bed at a reasonable time for a change.

Today there will be grocery shopping and probably biking to a beer garden for lunch. Only two students today and yet another webinar in the evening. I’m thinking that I might become addicted to those. I am learning a lot about writing and book marketing and such but then I’m not quite sure that the webinars are worth my time. Usually somebody wants to sell something, of course, I mean, nobody can make a living by putting out only free content.

The problem is that you can only know if it’s worth it after you’ve seen the webinar. But then I will have more spinning or knitting time if it isn’t. It’s not as if all my hours came with a price tag.