I woke up at 6 and promptly went online. That is a habit I might want to break in the future.

I had breakfast rather early and everything went smoothly. I even worked on the novel, deleted a scene and started a new one that went rather well. And admired the yarn I finished spinning last night: 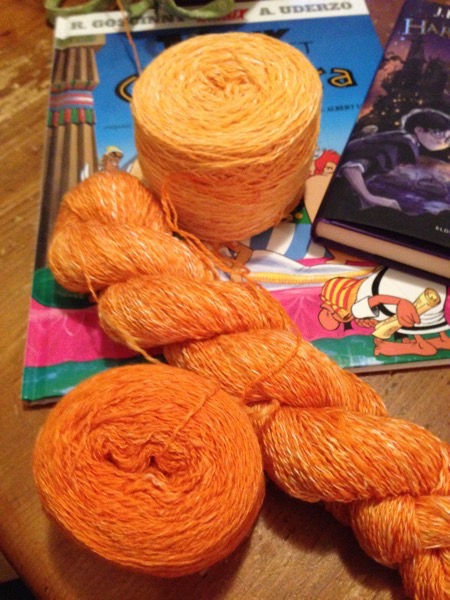 It’s a perfect mixture of the two other colors. It is sitting on Latin editions of „Asterix and Cleopatra“ (French comic, very good) and „Harry Potter“. It doesn’t bode well that both of these arrived the night before and are still sitting in the kitchen. The boy didn’t really touch them yet.

My husband and I talked a little too long and then it was rather hot and humid when I went running. So I ended up walking most of the way: 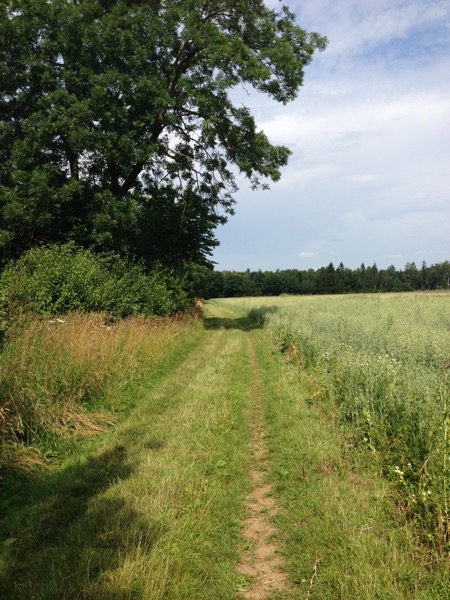 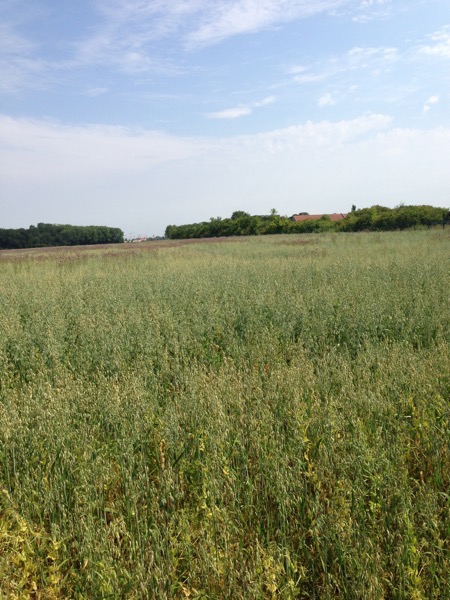 After running I went out again right away, still in my running clothes and everything. I bought concealer at the one rather fancy store that stocks only beauty stuff. The sales woman was a little surprised at me waltzing in, sweaty and in Vikram Five Fingers, asking for a particular brand of concealer and the color number and then rushing out again. And no, I didn’t want any samples.

Then the bakery and then the health food store which was out of tomato pulp. Bad.

In the meantime my husband had started making lunch. We had decided to have leftovers.

The way my husband did this involved frantic cooking for an hour and now we have about the same amount of leftovers than before.

We had: fried zucchini blossoms, fried rucola, fried eggplant, fried potatoes, leftover pasta fried with an egg and zucchini, salad, leftover potato salad (that didn’t get eaten), leftover hamburgers and he cooked some rice that he wanted to serve with tomato sauce but that still sits on the stove top untouched because of the lack of tomato.

No picture today. But you have to believe me that the table was groaning under the weight of serving dishes.

I didn’t have time to do the dishes before my first student because I still needed to take a shower and get ready for teaching.

Then my first student showed up to tell me that she wouldn’t be taking lessons today or the next weeks. If it was alright to give me a call in the fall? Yeah.

(I doubt it will happen but we’ll see.)

So I did the dishes.

And taught all.the.students. Who all showed up early.

I talked to one of my students about procrastination and phone calls one has to make and decided to at least look up the number of my hairdresser. And through that I found that I can make appointments there online! I didn’t even have to pick up the phone and talk to a person! Ha!

Which means I may have overbooked next week with the hairdressers and the podcast and the concert we’re seeing and the meeting an old friend on Saturday. Everything including a one-hour train ride to Munich and then a one-hour ride back. Fun!

Then the boy played piano and I started spinning and watching „Arrow“. I do like the show but it’s a little too much drama all the time to watch every day. I might go back to watching „Buffy“ after all.

So a very good day but mostly go, go, go all the way through. But I did manage to read a little before bed (and to buy the next trilogy in the urban fantasy series that I’m currently reading plus two free books by a very good romance author). I told the boy that I want half a year off where I only read so that I can get through all the good books I have but then that would get a little boring too.

Today there will be a little less stuff, I will do the rest of the grocery shopping (including the tomato pulp) and only teach very few students. Usually that means I don’t get anything else done but I’ll be happy to be pleasantly surprised.

Tonight I will spin watching the presentation of the Tour de France riders and jerseys for a change.