I did sleep until 6.30 because I went to bed after midnight. Which was a rather bad move and had some bad consequences.

Made breakfast and did all the usual things, and I even started writing right after breakfast but I only got 361words in. Which isn’t all that much.

We were pretty early, and I did most of the cleaning on time and read about strength training (I did buy a new book and am hoping that that will motivate to start again.) and read a novel I didn’t want to put down.

I made pizza on time and got ready for teaching early enough. (First Friday student continues to be almost 15 minutes early for her 30-minute lesson which continues to make my Friday lunchtime somewhat stressful.): 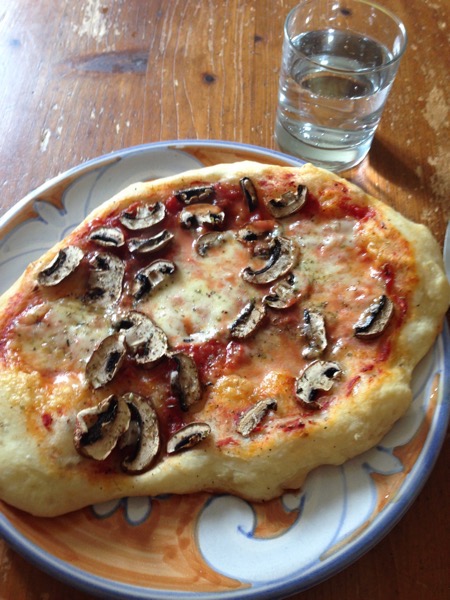 Next time I’ll make this pizza I should try to knead it quite a bit more before letting it sit. I think that will improve the texture of the dough a lot.

Then I taught a medium amount of students. I had a one-hour break before the boy’s lesson which I spent eating cheese and chocolate (not my best move). I failed to write some more which had been my plan. Note to self: don’t go to bed too late. No, not ever.

Then I waited for the boy for an hour before he remembered that he had a piano lesson. I did read some more, so the time wasn’t completely wasted.

His playing is coming along nicely and I am trying to make him realize that no, he isn’t a bad pianist, he is actually quite good for the level he is at (also for the level he is practicing). And he actually has a feel for music. Seems that his parents’ profession has rubbed off a little.

We were also talking about other stuff, he just spent all his money on computer games, and then I found out that he lacks adequate loudspeakers upstairs. He likes listening to music and usually uses his computer speakers which sound horrible.

Well, that is the other advantage of living in a household where music is rather important (also in a household where his grandfather used to work for a company that built loudspeakers and amps) – there are several options for giving him an adequate sound system, we just need to lug the stuff upstairs and connect it. (The boy, „But what about cables? Do we need to buy some that are long enough?“ Cue ROFL – we have a huge box of cables in the garage so that shouldn’t be a problem.)

The boy and I used a break between soccer games to watch some Star Trek: TNG but he was so slow in making his dinner that we didn’t finish before the next soccer game started. So we ended up watching the last five minutes on my minuscule laptop screen. The sound was great, though, because the speakers my laptop is connected to are much better than the ones built into the TV. (Why yes, we should put a sound system into the TV room as well.)

Then I spent some more time not doing anything productive and then it was time for that day’s webinar. (Tim Gral on author platform, not bad at all.)

And then I went to bed too late.

So for today I really need to get some words out, and I also want to run about 8k. And spin.

The spinning was somewhat frustrating yesterday because I had set up my wheel in a way that made me spin the third color for the shawl in the opposite direction of the first two. Which is.a mistake that can’t be fixed. I just hope this won’t show up much in the knitting but I will have to live with it regardless of the outcome.

I also think that the colors don’t really work with the shawl design because the designer was looking for color progressions that are much more subtle. Again, there is nothing to be done about that.

But. It’s the weekend! No teaching! And no appointments!

Maybe there will even be an excursion to the beer garden. It might be too cold, though. We’ll see.