Well, at least I did sleep well and enough. And then I went through my morning routine all the way without getting distracted – much. I had to scramble to get breakfast ready in time. But I managed.

My husband was a little later than usual which was great because I was totally busy researching German trial procedures for my novel. As you do.

I didn’t linger after breakfast because I had a ton of things to do. I had realized that I couldn’t record the podcast yesterday early afternoon as I had planned because my husband would be teaching at the same time. And when he teaches while I record my microphone picks up weird bass noises.

So I rescheduled everything, went to the supermarket and then running afterwards. I also decided to make a renewed effort to avoid singular use plastic which meant I spent quite some time looking for Greek yoghurt in returnable glas jars. I also had taken a Tupperware container with me to buy cheese but then chickened out. I just couldn’t bring myself to find out what kind of cheese they had at the cheese counter while asking if they would put it into the container I brought. Plus, everything in there was individually wrapped in saran wrap.

I hope that we still have enough cheese left to last another week. If I don’t binge eat any we’ll do. I’m debating riding my bike to the health food store that’s six kilometers away next week. We’ll see.

If the yoghurt is not to my liking I might try making my own. One step after the other.

So I came back home and the boy was home early. Which suited me fine because my husband was nowhere to be seen and I wanted to go running while at the same time expecting a package in the mail. So the boy had to stay in the kitchen and wait for the mailman. (That worked, by the way.)

The weather was nice and cool: 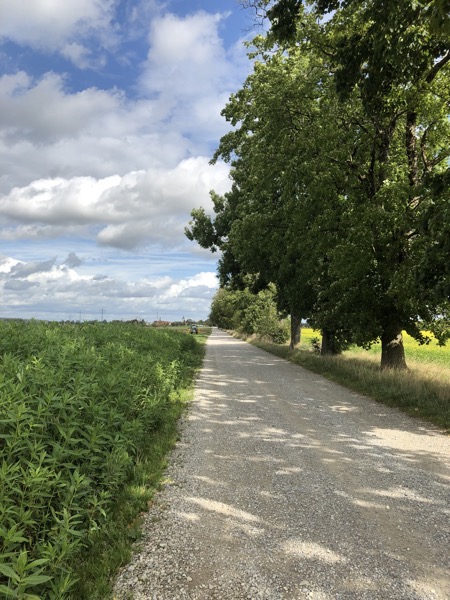 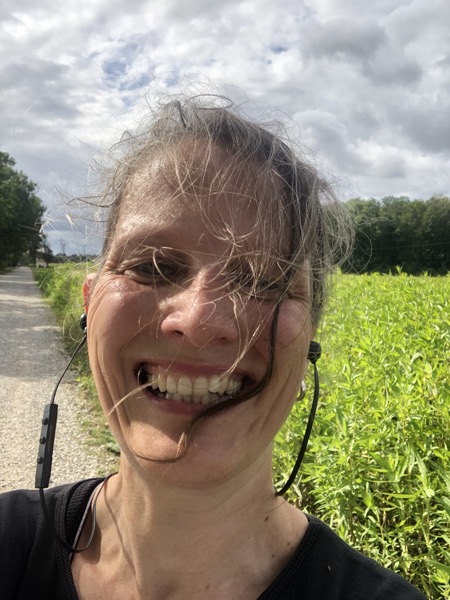 Also, a bit windy. And I saw some mushrooms: 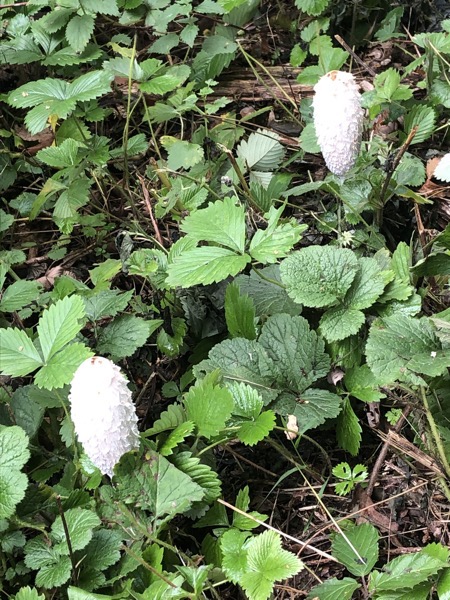 When I came home lunch was already cooked and almost on the table. I am rather grateful to my husband for doing this: 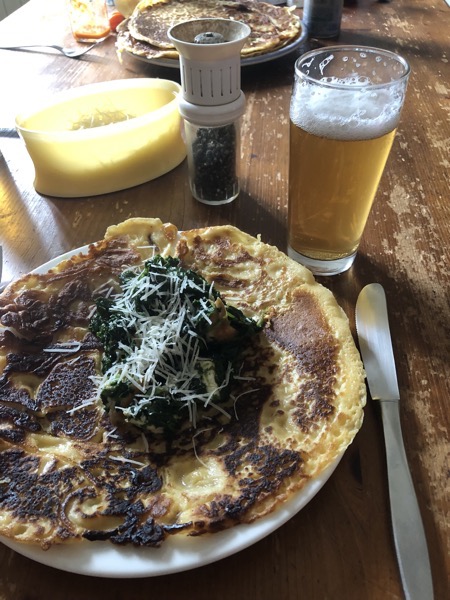 For the first time ever my husband had put chicken into the spinach and also for the first time ever the boy did not want his pancakes sweet with jam but instead asked if he could have some of the spinach. Well, we would have shared but he doesn’t eat meat. We’ll know for the next time. (It’s a little confusing. For years and years and years he refused to eat pancakes with spinach until we resigned to just give him jam and all of a sudden he is changing his mind.)

I took a little break, did all the dishes, finally took a shower and tried getting ready to prepare some lessons and maybe sew a little when the boy came back home from school for the second time that day. So we looked at the shoes we had ordered and he tried them on. The boots and slippers work but the regular sneaker-like shoes were way too big so I’ll have to send them back.

I taught my students for the day, practiced a song for singing lessons and another one for a ukulele student and was just about to start writing this post when the boy showed up again, this time with a pile of papers from school. Also, we apparently had done the whole ‚get permission to go on a workshop and miss school for three days‘-thing wrong and had to do it again, differently.

I broke my glue stick in the process, the boy wrote down the wrong subjects, my husband mingled shortly and got asked about the chords to a song that I had been meaning to learn all week (and copied them for me immediately) but we persisted and acme out victorious.

I started writing this, the boy took a shower, then I had to wait forever until I could finally brush my teeth and get ready for bed. I did manage to turn the lights out on time but only barely.

Oh, and the only thing on my to-do list that I didn’t do?

Folding laundry. I can live with that.

Today will be interesting. I decided to try and record the podcast (huge and epic English episode) before lunch and get it ready for publication in the afternoon before teaching. I have a new student coming and am hoping that I won’t be braindead by then. I will also be teaching the student for whom I had wanted to learn the chords to „To Be With You“. Maybe I’ll be mean and make him play them. (He’s learning singing from me and guitar from my husband and has already played the song in the past.) I also want to see him sing and play at the same time because he mentioned that he has a problem with that.

So, basically it will be go, go, go until the evening.