Woke up at 5.30 again without an alarm even though I had gone to bed a little late. Was gripped by overwhelming dunnwannas right away, so no writing, nothing. I figured I’d do that after breakfast. But then my husband showed up at 6.40 because he had found a tick that he couldn’t remove without help. He had gone into the woods to reap nettles the day before, all bundled up in clothes and smeared with tick repellant but still.

He trundled off to bed again after that and I made breakfast. Had a quiet breakfast with the boy and then waited for my husband to show up again. He came over rather late, which I should have expected.

There was talking and knitting and reading and dishes, all the usual stuff. Then I went to the pharmacy to get my antihistamine, uploaded the podcast video and helped to make lunch: 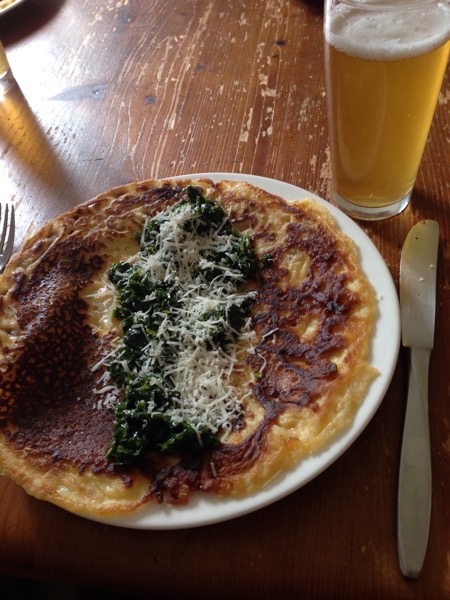 That was the last spinach from our garden.

I had a hard time getting myself to move after lunch. I wasn’t really looking forward to doing the taxes. I did think that all the receipts would be in their usual spot and that listing my income would be a breeze but it turned out that I had been a little sloppier than usual and that my husband hadn’t given me any of his receipts.

So I spent a couple of hours just finding pieces of paper and making a list and then my only student of the day was due.

I had hoped to be finished with all the tax stuff by then but I will need another afternoon or so.

Then the boy and I did some bodyweight training, I hung up a load of laundry, my husband and I decided to skip the concert tonight and that he would make pizza dough but I would make the pizza itself. And then I fell into bed after a bit of journaling and making a list for today.

Today will be a typical Friday, cleaning, pizza, lots of teaching and then the ritual watching of Star Trek.

And then it will be two weeks of school break.