So, it seems that I completely forgot to start writing a post yesterday and this morning I couldn’t really be bothered. Sorry.

Everything is alright, I’m just a bit listless. I’m attempting a restart today, wish me luck.

I totally forgot to plan the week ahead. Oops.

I did get enough sleep and did my full morning routine. (Still not talking about writing here.) Talked with husband, called my mother and then my husband and I started making pasta from scratch for lunch. It took us several hours but the result was spectacularly good: 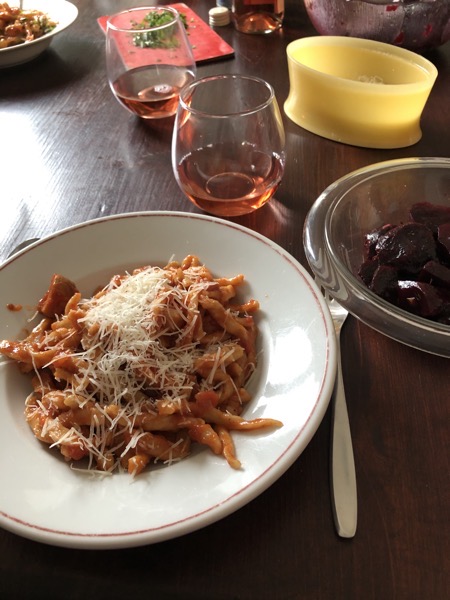 I know it doesn’t look like much but each of those individual noodles was hand-rafted by me. It took me one hour to just shape the pasta. I guess the next time I’ll be somewhat faster because now I know how to do it. The sauce has tomatoes and porcini and that’s red beet salad on the side.

I spent most of the afternoon looking at the huge pile of dishes sideways until eventually my husband came by and we tackled them together. I mostly read „Blood Heir“ which is still extraordinarily good but I also scrolled through stuff on my phone got cranky about how the pandemic is handled, wrote some emails to students and played games on my iPad.

Only much later did I realize that I had forgotten about the planning and some other stuff that would have been rather important. I did squeeze some Chinese practice in at the last minute, watched the season 3 finale of ‚Star Trek: Enterprise‘ which was okay-ish but we kept pausing the episode to yell at the screen, „This is not how that works!“ or „Who designed this machine? This is really ridiculous!“ And so on. As one does. The cliffhanger was nice and interesting, though.

I still have a problem with things like, „If we route that pulse through the deflector dish all systems on the ship will be fried!“ turning into, „Let’s just zap this and then fly away!“ and also why do they only have one communications officer on board and how can an officer with PTSD and a brain injury who is still not safe to be moved be better at decrypting a code than all the other people on the ship including all the mates of the guy who encrypted it in the first place? Also, why, on a ship with more than a hundred people, do they only have one doctor and no nurse? Unless there are a lot of people injured at the same time. Then there will be more nurses or medics or whatever but afterwards? Poof! Why is it when Hoshi returns to the bridge (still sick, by the way) her station is unmanned? Why do they only have one pilot? Why is the pilot doing scans? Why does Enterprise in the future not have drones? Remote control for shuttles? Why does nobody think of using the shuttles to tow the ship ever? This is not a car on the road. It is a ship in space. There is almost no friction there. Using the shuttles impulse engines should be better than using thrusters.

I better stop here now. Sorry. Not my favorite series. I mean, I can excuse the whole concept of „let’s just put way more energy through these conduits than usual to create more output“-nonsense but there are many, many blunders in this particular iteration of Star Trek that make me itch all over.

I did go to bed at a reasonable time for once.

Today there will be running, laundry, teaching, Netflix and hopefully going to bed on time again. I also should do lesson prep and learn Chinese. I’m running out of steam with that at the moment because it feels like I’m not making progress at all. I should probably ramp some things up but that would require more time and energy. And energy especially seems to be in short supply at the moment.

I woke up late and skipped the whole morning routine. That always feels rather freeing but usually doesn’t bode well for the rest of the day.

My husband and I talked, overall the family mood is on the upswing, so that’s good. I did the dishes and then went out for my run/walk. There were quite a lot of people out. Well, it was Saturday and the weather was very nice: 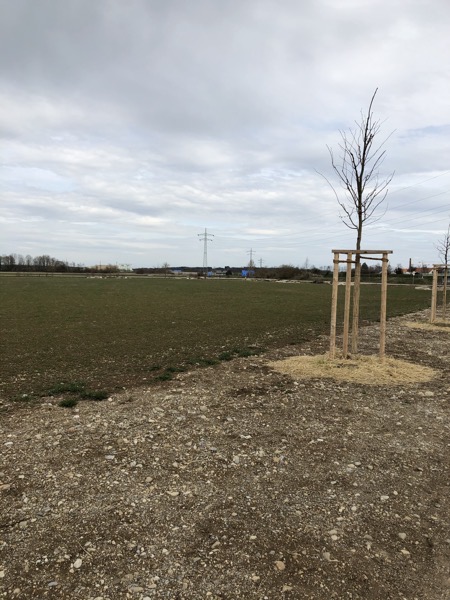 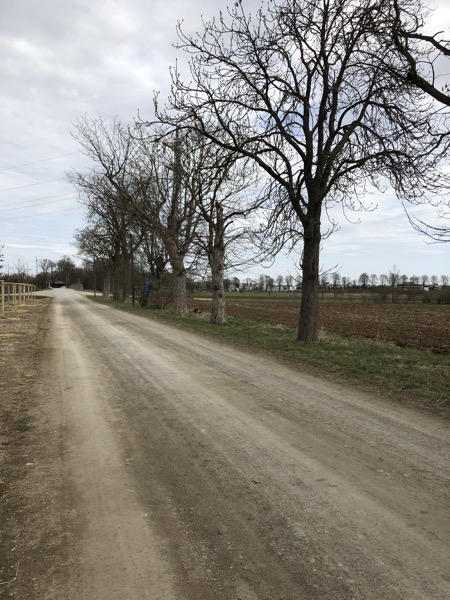 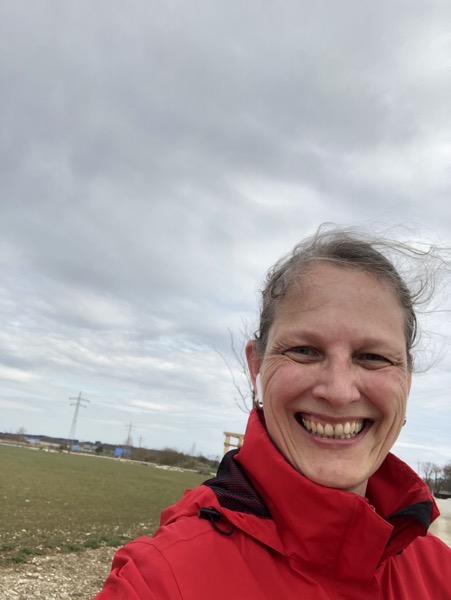 I find that the running goes better if I manage to do it earlier but that was a late run.

Then I came back I woke the boy up (who opted to skip breakfast again) and then we made pizza together: 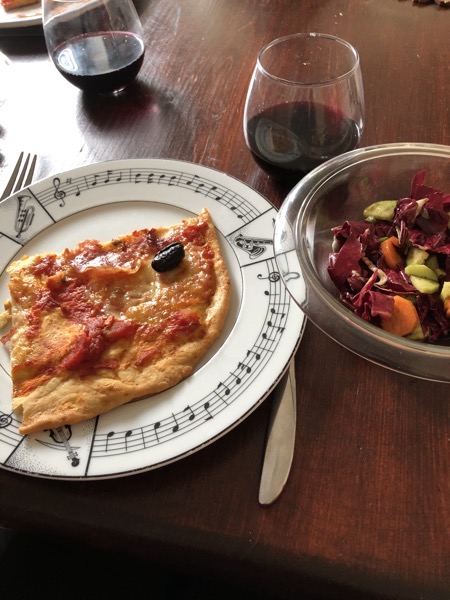 Salami for a change and here’s the boy’s vegetarian option: 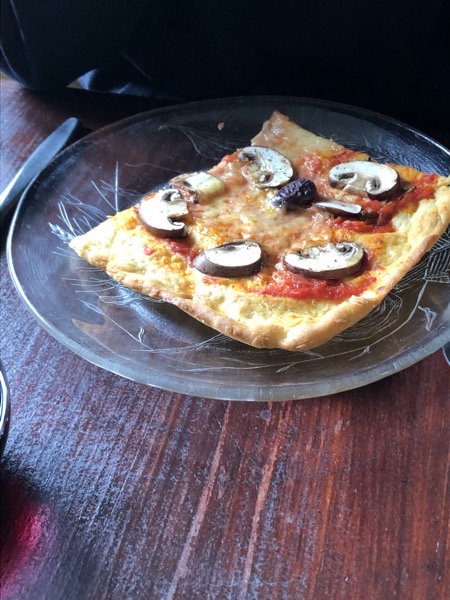 I spent the whole afternoon reading „Blood Heir“ by Ilona Andrews and playing video games and only managed to take a shower right before dinner.

The boy and I watched an episode of ‚Torchwood‘ that was really good and then I watched two episodes of ‚Accidentally in Love‘. Either the series is getting better or I’m getting used to it, anyways, I’m really enjoying it.

Then I made a neat stack of all the dirty dishes, started writing this post, did some yoga and went to bed.

Today I will do everything I failed to do over the past two weeks. Or not.

I will certainly call my mother on the phone, make pasta with my husband, clean those toilets already and plan out the next week. And read some more, of course. First things first.

I did most of the cleaning, morning yoga, helped to make rogan josh for lunch: 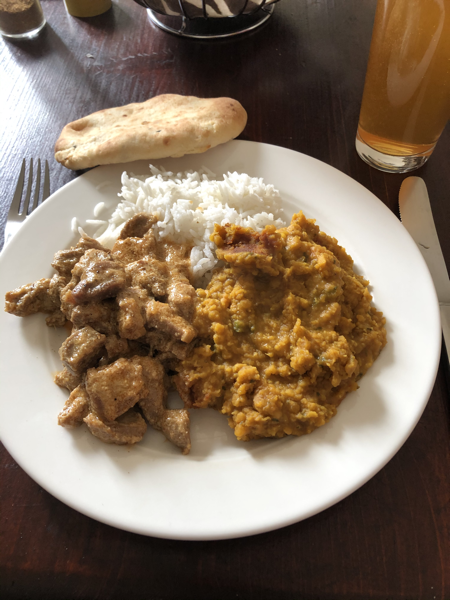 Had the rest of the day vanish on me, watched an episode of ‚Star Trek: Enterprise‘ with the boy that was actually pretty good and went to bed too late.

I wanted to blog this morning but only remembered now. So far I have skipped all of my morning routine, played games on my iPad, got angry about politics and practiced a bit of Chinese. (I did break my 32 day-chain on Fluent Forever the day before.)

There will be running today, pizza for lunch, the cleaning of the bathrooms (for real!) and evening yoga.

I tried sleeping in but failed.

Had like an ongoing argument – or rather discussion – with my husband all day. He is obviously unhappy and we were basically debating how much of that is my fault. Or something. It was the kind of day where he complains about people always getting in his way and objects being unwieldy.

Interestingly, the boy started speaking up at dinner time. He never does that but it was clear that he was completely done with the complaining.

I did do most of my morning routine, so that was good. (Writing? What writing?) I walked to the supermarket and bought all the cheese. Came back to a husband who was completely stressed out about making lunch and hearing that I was supposed to teach at 2.30.

So we had this scrumptious meal: 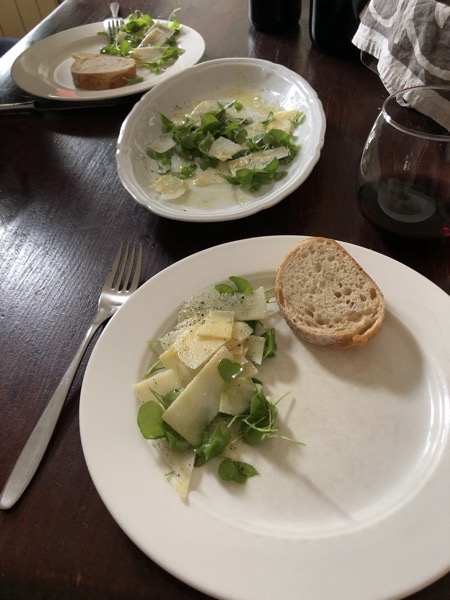 Arugula cultivated in a pot in my husband’s studio and parmesan cheese. We did not make the cheese. 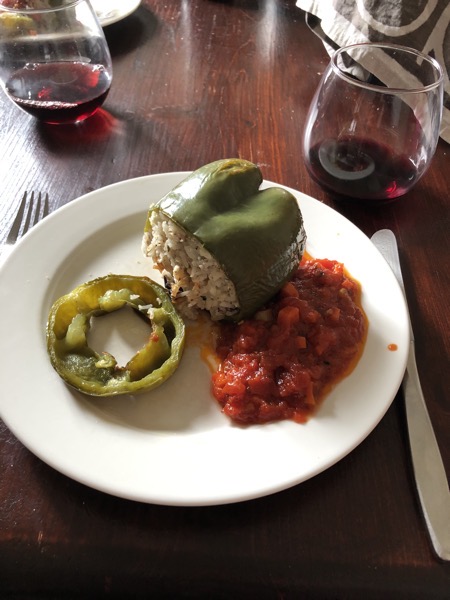 Stuffed bell pepper. There is rice and olives and pine nuts in there somewhere. Also cinnamon, thyme and chili. It was very good. And yes, that is wine. We’re still on Easter break rules.

We did not give the boy wine yesterday because he apparently went to bed at about the same time that I got up in the morning and after waking him up three times he finally managed to get up in time to eat lunch. Oops.

We have now changed our rules, by the way, it used to be that we insisted on him getting up at 9.30 on days without school. Then the time slowly creeped to later until I was going upstairs some time between 10 and 11.30 to wake him up in person. And yesterday we decided that since he is technically a grown-up now that maybe we’ll just go with not setting the breakfast table for him and if he goes to bed late enough that he doesn’t want to get up before lunchtime that he maybe just sends me a text telling me so. Please.

He asked, „How am I supposed to text you when I’m sleeping?“ and my answer was, „You just text me before you go to bed when you realize that you won’t get up on time.”

I did get myself some roses at the grocery store. Roses are my favorite and I adore this shade of red and they were only 1.99. Win-win-win. 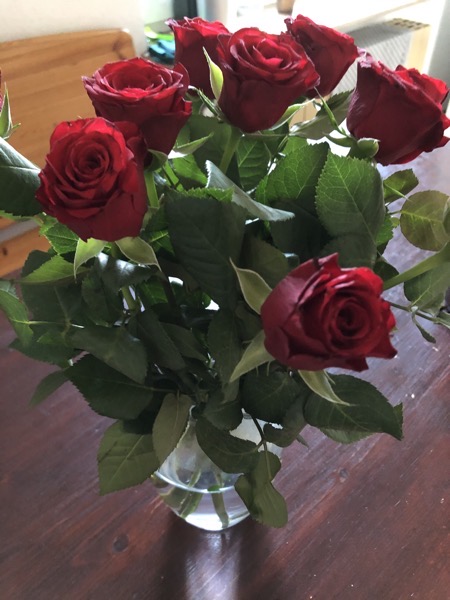 After lunch I ate some chocolate (the idea of that chocolate tasted better than the chocolate itself, by the way) and then I taught two students. I had a break where I thought I would do all kinds of things but I ended up watching a talk about productivity systems, as one does.

Then I taught one more student, my last student of the day canceled, we had some more discussions about personal incompatibility while making dinner (yes, this is a bit exhausting, thanks) and the boy and I watched a delightful episode of ‚Torchwood‘ while eating dinner. Then I finished watching an episode of ‚Accidentally in Love‘. The series is starting to grow on me.

And then I watched an interview that Jessica Abel did with Austin Kleon while starting writing this post. And then I did the dishes, wrote in my bullet journal, did some yoga and went to bed. Not too late.

Today is cleaning day and who knows, maybe the stars will align and I will write a few new words or something like it.

I actually got almost enough sleep, so that was good. On the other hand that meant getting up late.

There was all the usual, my husband is feeling a little better. The boy got up super late again and I did a huge pile of dishes and helped a little with cooking before going on my run. When I left the house it was snowing like crazy but it cleared up pretty fast: 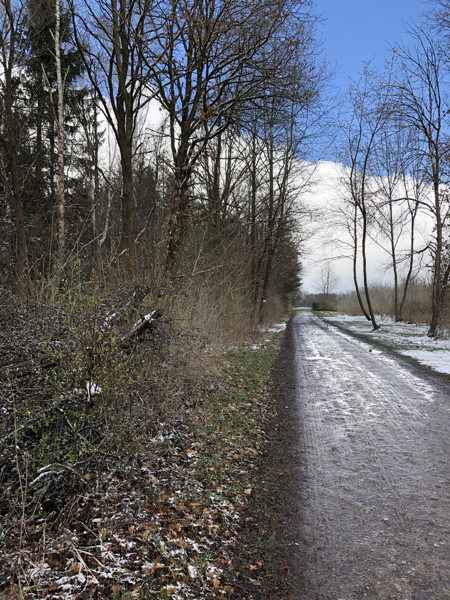 I have to say, 1-minute intervals make me pretty happy, especially when I’m only running for 23 minutes: 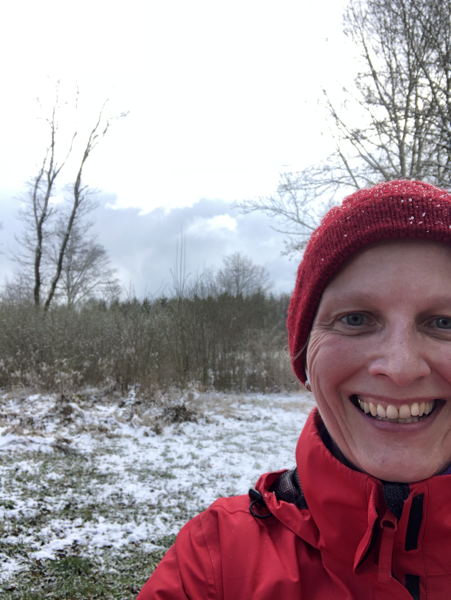 My husband made Zuppa di Valpelline: 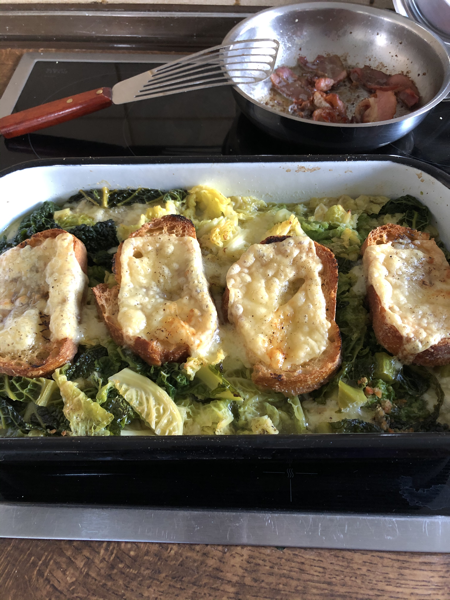 Yes, that’s called soup and yes, this was in the oven: 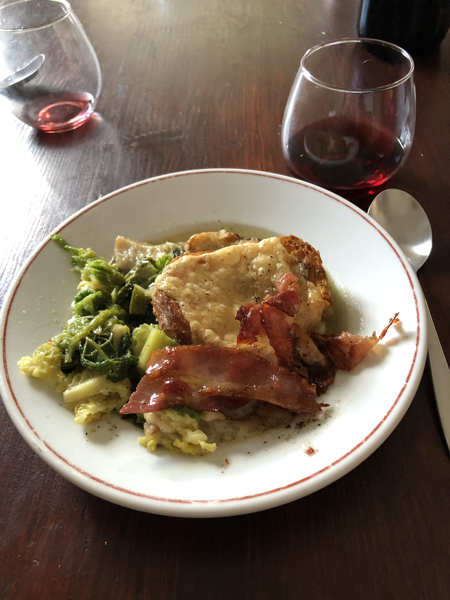 Very tasty, even though we did not layer the whole thing with bacon because we needed the vegetarian option as well.

Then my new tea set arrived: 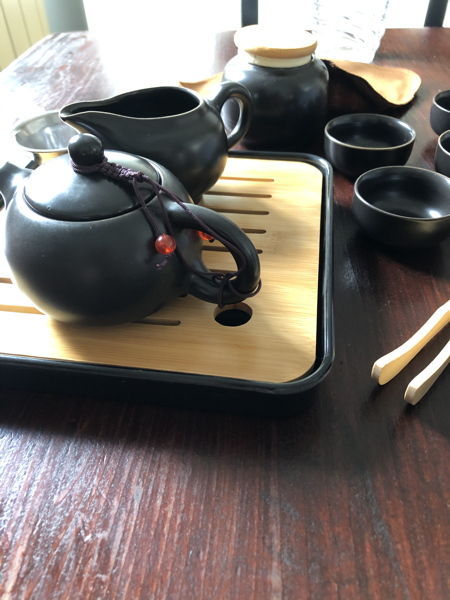 Now I just have to learn how to properly make Chinese tea. Everything is so tiny! It’s a travel set and came with a nifty bag to store everything in.

I spent a lot of the afternoon playing games on the iPad but I also did all the dishes and started knitting a new pair of socks. I don’t know how long I haven’t knitted anything but it’s been a while. I found that I’m a bit tired of all the crochet blankets.

My husband mopped the annex floors, so that was good as well.

I made an attempt to start writing this post but then it was time for dinner. The boy and I watched another episode of ‚Enterprise‘ which was actually decent.

I spent some more time on this post, wrote in my bullet journal, practiced Chinese, did some yoga and got ready for bed.

Today there will be the walk to the supermarket, teaching and then ‚Torchwood‘, I think. Bonus points for strength training.