No yoga, no meditation, no writing. Made breakfast in time for the boy to leave for school. Talked with husband. Saw the optician and confirmed that I need new glasses. Talked about maybe having a pair of glasses just for things like embroidery, sewing and reading. Very exciting. My regular new glasses will be rather expensive, though. And my eyes are so dry that it’s causing problems with my sight. Guess I need to make an appointment for the eye doctor as well. Until then I’ll use all the eye drops.

Called the piano tuner. Pulled out the carbon monoxide detector that has been sitting around since forever because I didn’t feel up to mounting it. Turns out I already had read the manual and marked the important bits. Decided that I don’t need to mount it on the wall with screws and such but that I can just put it on a shelf near the wood stove. Problem solved.

That was when my energy for the day ran out completely. I did the breakfast dishes and tried to push me to clean the house. Instead I sat down, started reading a new novel and ate some cheese. Also, I’m back to reading books on organization and time management for people with ADHD again. No, I don’t think I’m having ADHD. I just need tips that help people who are easily distracted and have a hard time making themselves do things.

My husband had a great idea for lunch: 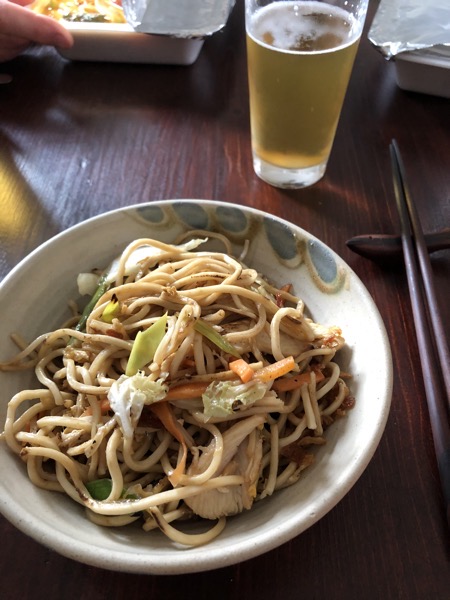 There were spring rolls as well but I forgot to take a picture before eating them. 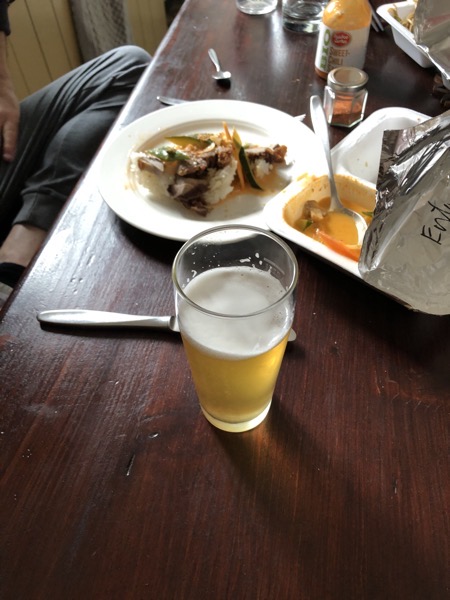 Then I started teaching. I had a weirdly full schedule for a Friday. I tried doing some cleaning in between students but couldn’t make myself. One student canceled. One was in the shower when I called her, so we moved her lesson around. During my breaks I just hung around waiting for the week to be over.

I have to say, though, the best thing about my job is that I get to make music. And that I get to work with all those people. I mean, it’s often a bit much for a super-introvert like me but I have so many students that I genuinely like.

I had reminded the boy three times throughout the day that I would be off work at 6.30 so that we could start watching ‚Torchwood‘ right away. When he hadn’t shown up after seven and hadn’t reacted to any of my texts I finally realized that he must have fallen asleep. And he had. I went upstairs to find him sleeping on his bed with some Youtube video playing.

We watched the episode a bit late and it was a very good one. Also a somewhat disturbing one but most of them are.

Then I watched an episode of ‘The King’s Avatar‘, managed to not start a second one right away for once, started writing this post, stacked the dirt dishes neatly and went to bed without writing in my bullet journal or anything else. Oh, apart from taking some pastries out of the freezer so my husband and the boy can have them for breakfast today.

Today there will be the running, some Chinese practice and I guess I won’t plan the rest of the day until after lunch. I’m not sure but all this Chinese learning (which is feeling rather futile and frustrating most of the time) might also be taxing my brain a bit. It feels sluggish and a bit overwhelmed. On the other hand I haven’t been sleeping enough, so that might be a factor as well.

I decided to just pretend I was prefect Susanne and do everything right. I mean, yeah, there is no such thing as perfect and I don’t really think anybody will ever be. (Neither do I think there is anything wrong with me, it’s just that living in sloth is exhausting and no fun.)

The first half of the day went very well, as did teaching. I did all the dishes, I practiced Chinese, I did yoga and morning pages and meditated. Lunch was delicious minestrone: 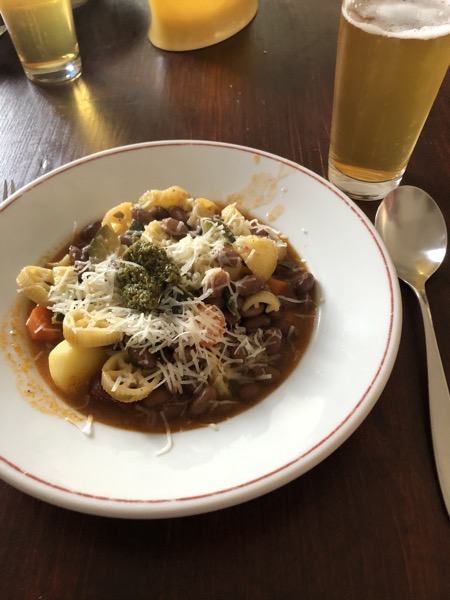 I finished teaching early because my last student rescheduled and then sat down in front of TV with my dinner. All of that was good. And then I did the thing where you ‚just watch the beginning of the next episode‘. Two times. Until I was too late going to bed yet again. I guess that one will turn out to be a hard habit to break.

Today will be extra busy. I decided to risk going to the optician for new glasses after all. Some of that weird headache-y feeling I’ve been having is probably due to wearing the wrong glasses constantly. So I’m hoping that the optician is a sensible guy. The shop is only open by appointment at the moment and I’ll wear my mask at all times. If I feel unsafe I will leave.

In addition to that I also want to clean the house and teach more students than I usually do on Fridays. Like, twice as many students as usual on Fridays, almost a full day of teaching. So that will be interesting. Bonus points for doing strength training but don’t hold your breath for that.

Maybe I can emulate a person who makes the right decision in the moment and follows through on her plans a bit longer today.

Not the best of days, I mostly just waited for it to be over, then had one of those conversations with the boy that went on for too long and went to bed too late. New day, new try for today.

Running was pretty good but a little crowded and super-muddy. I’m contemplating getting a pair of running shoes that does not have leaky soles. 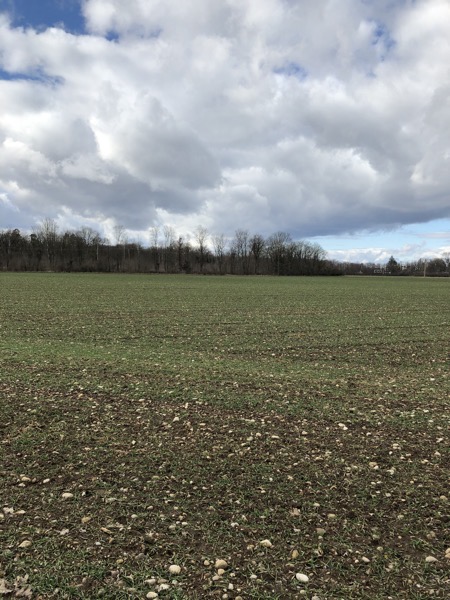 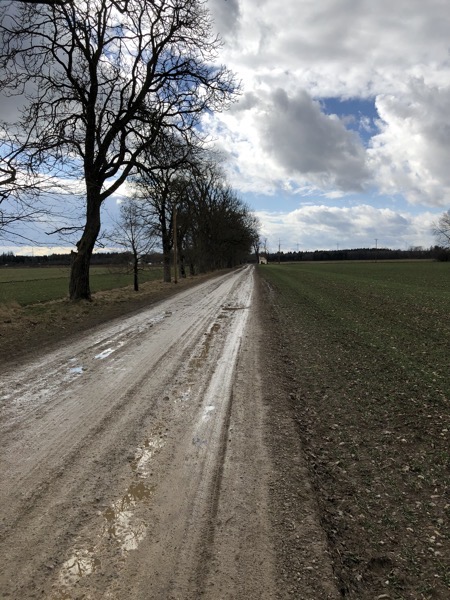 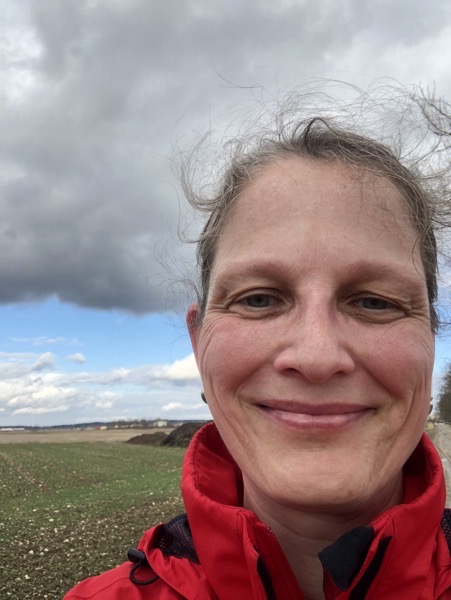 As you can see t’s much warmer already and the snow is as good as gone.

We had leftovers for lunch: 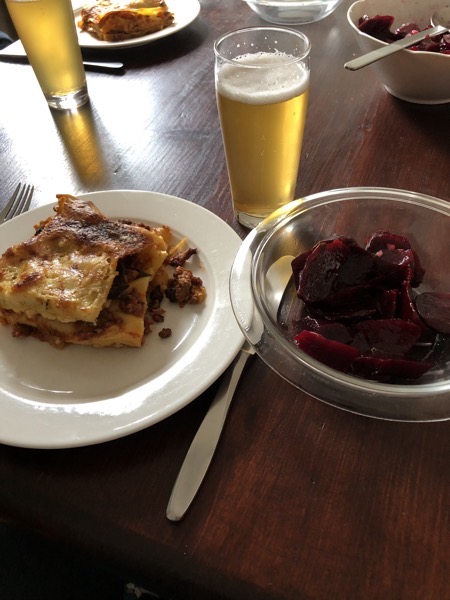 Today there will be the walk to the supermarket, lots of teaching and some crochet. I am enjoying reading „Blindsided“ by Victoria Denault but am spending more time on social media than reading.

Sinne I went to bed way too late – again – I was somewhat tired all day. Funny that. I do feel very ridiculous posting here every day with the same news. Now I should be able to get myself to bed earlier but part of me doesn’t want to. I’d rather stay up and watch Netflix or read. I should think back to how I feel when I’m well rested. That is a good feeling.

I did do my whole morning routine, well, minus the writing.

The boy went to school, my husband and I talked, I went to the bakery for Faschingskrapfen. I was a little disappointed that they were almost out and didn’t have a lot of bread either but then I was lucky enough to get the last three. Chocolate. One for each of us, so that worked out.

Then I went to the health food store and bought all the things. Minus butter because I didn’t know we needed some. My husband tried calling me but I don’t have reception inside the store. Fortunately he could borrow some from his mother.

So we made lasagna: 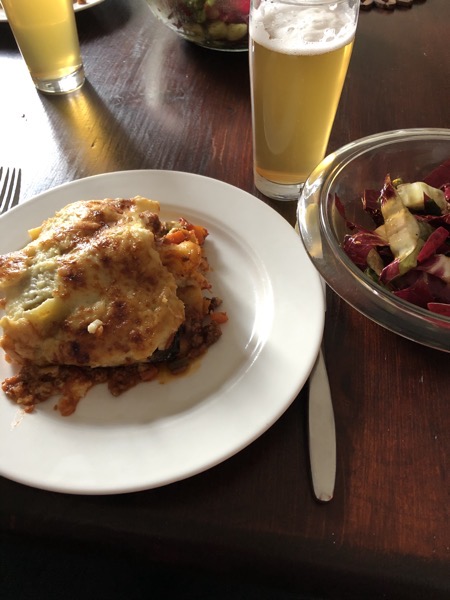 Then the boy and I did the dishes and talked about language, in between my husband and I hung up some laundry and talked about people and feelings and then I was all peopled out for the day. Did not do my lesson prep or anything else.

Taught my first student, the second one had forgotten they had a lesson but the third one showed up again. I used the break to make an appointment with the optician. I do need new glasses. I was determined to wait a little longer but then I realized that the weird feeling I have in my eyes must be due to the wrong glasses. So I’ll go and get that checked out on Friday. I hope it will be safe enough. It’s all by appointment and I’ll stay masked. If I feel unsafe I will leave. I supposed it will be a little like going to the doctor.

We had dinner, all three of us together, then I started writing this post, neglected the small pile of dishes, watched another episode of ‚The King’s Avatar‘ and went to bed.

Today there will be running and lots and lots of teaching. Not much more, I guess. I hope to feel a little less sloth-like at least.

I got almost enough sleep and woke up shortly before six. Wrote morning pages and then got sidetracked yet again, so no yoga and meditation. No writing either. Breakfast was had.

There was breakfast with the boy who was learning at home and then a long conversation with my husband. I did some Duolingo. Even though I didn’t feel like it I went outside and ran 3k ver slowly with only a little walking: 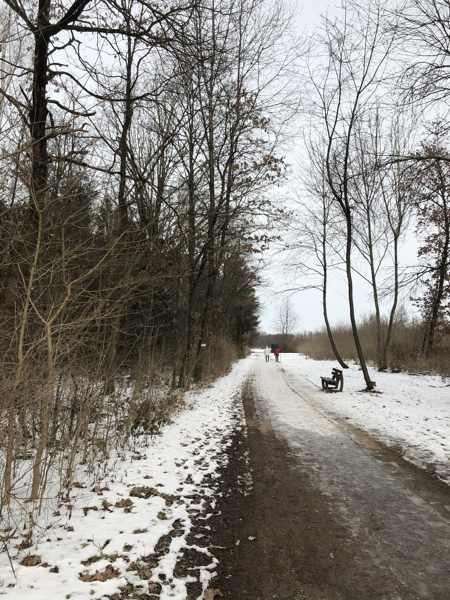 It was much warmer than the days before and there were lots of people out. 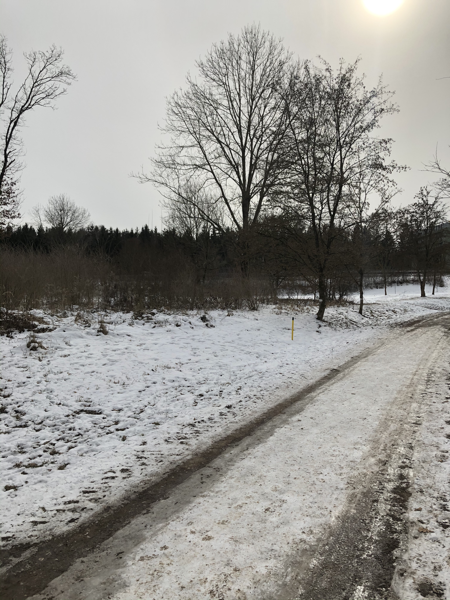 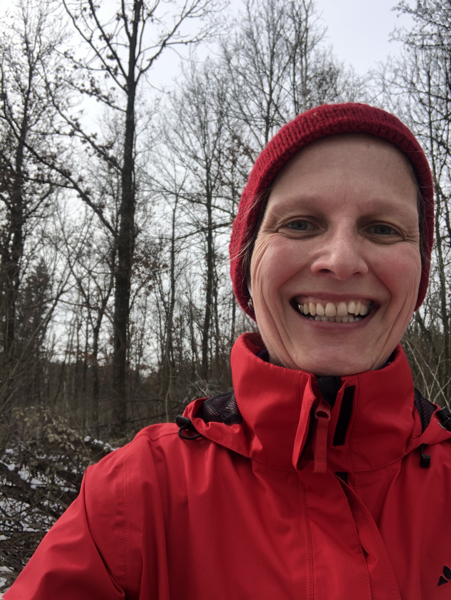 Back home I took a shower before eating lunch: 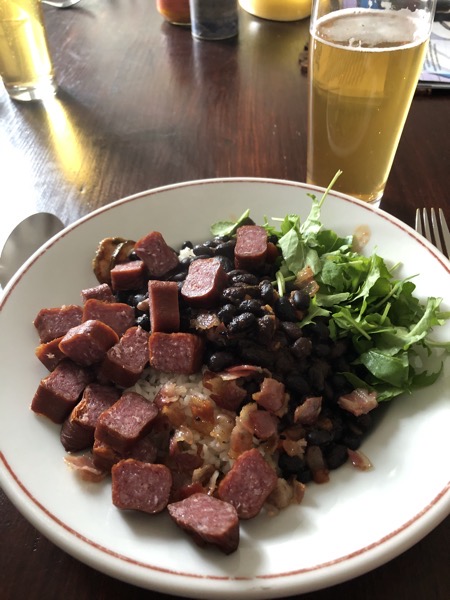 Then dishes, more talking with the boy, teaching all afternoon, a quick dinner and a Zoom thing about how to get more energy. That one was rather helpful. I learned quite a bit about why I procrastinate so much. Not that my brain was still in working order at that point.

So I vegged out in front of Netflix and went to bed.

Today there will be the walk to the health food store, there will be Faschingskrapfen and only a few students. I am having high hopes for getting stuff done between lunch and the first student but we all know how that usually turns out.

We don’t really do commercial holidays. We did make special food, though, as was expected.

I woke up after lots and lots of restful sleep, so that was good, and did my entire morning routine. Taking my phone to the kitchen first thing in the morning and leaving it there seems to be a good strategy. I still dawdled somewhat and did not have time to write before 8.

Had breakfast, talked with my husband at length, called my mother on the phone and made gnocchi from scratch to accompany my husband’s saltimbocca alla romana: 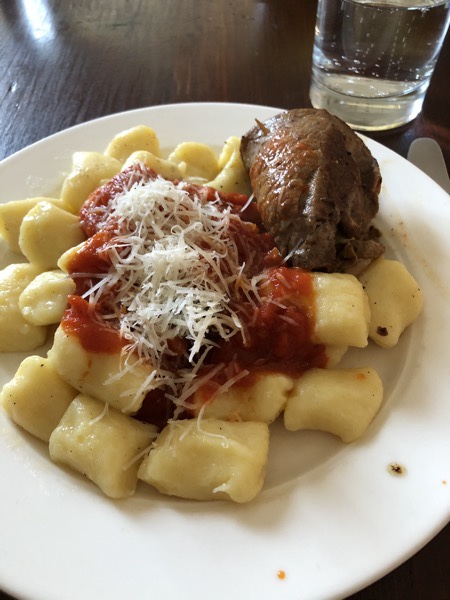 Did the dishes, talked with the boy at length and then somehow the whole afternoon evaporated. I do remember playing some ‚Stardew Valley‘.

Then dinner while watching ‚Enterprise‘ with the boy. That one is still rather disappointing but I made up for that by watching three more episodes of ‘The King’s Avatar‘ and then my day was gone. I did refill one of my fountain pens, wove some of the ends in on the crochet blanket and crocheted a few stripes but that was it.

Today there will be some running unless it is too icy outside, quite a bit of teaching and whatever I can squeeze in between. Here’s to a brand-new week!