Not a bad day, not the best either.

I actually started writing before lunchtime so that was a win.

Lunch at my mother-in-law’s was very good but she forgot that my husband and I can’t have onions. Oops. We were there for two hours or so.

Then I went and procrastinated a bit before writing some more. I sang and I played the piano. Then I tried to make myself start with the dress I want to sew but unfortunately the boy needed my help with some homework again. So, you see, it wasn’t me, I just didn’t have a chance. (Never mind the hour I wasted beforehand.)

I’m almost finished with the second sleeve for my Carbeth cardigan.

My husband is turning more lawn into veggie beds. This time it’s for the potatoes again.

I’m laughing at myself because I used to think that I wasn’t an anxious person. Until I realized that all of that organizational and planning stuff I do is because I am, in fact, anxious.

I’ll be going to a sewing blogger meeting in Augsburg next weekend. I looked up trains weeks before. And put them in my calendar. And thought about what to wear. And then I got the confirmation e-mail with all the addresses and times. And looked up more trains, and looked up the locations on google maps, and today I pulled out the list of attending bloggers and looked them all up.

Yeah. Not anxious at all. Funny. At least I won’t stay home because I’m feeling uncomfortable.

Oh, and today I found out that I’m no longer getting an email when someone leaves a comment. That’s why I haven’t been replying to them. I just didn’t know.

No idea what’s wrong, the settings are fine. I’ll try to remember to check more often, and I hope I’ll catch everybody’s comment. Sorry, I had no idea.

And tomorrow there will be running, and then teaching and in between making music and writing some more and knitting. Sounds good to me.

I almost did everything on my list which is always a win.

Went for a run in the morning: 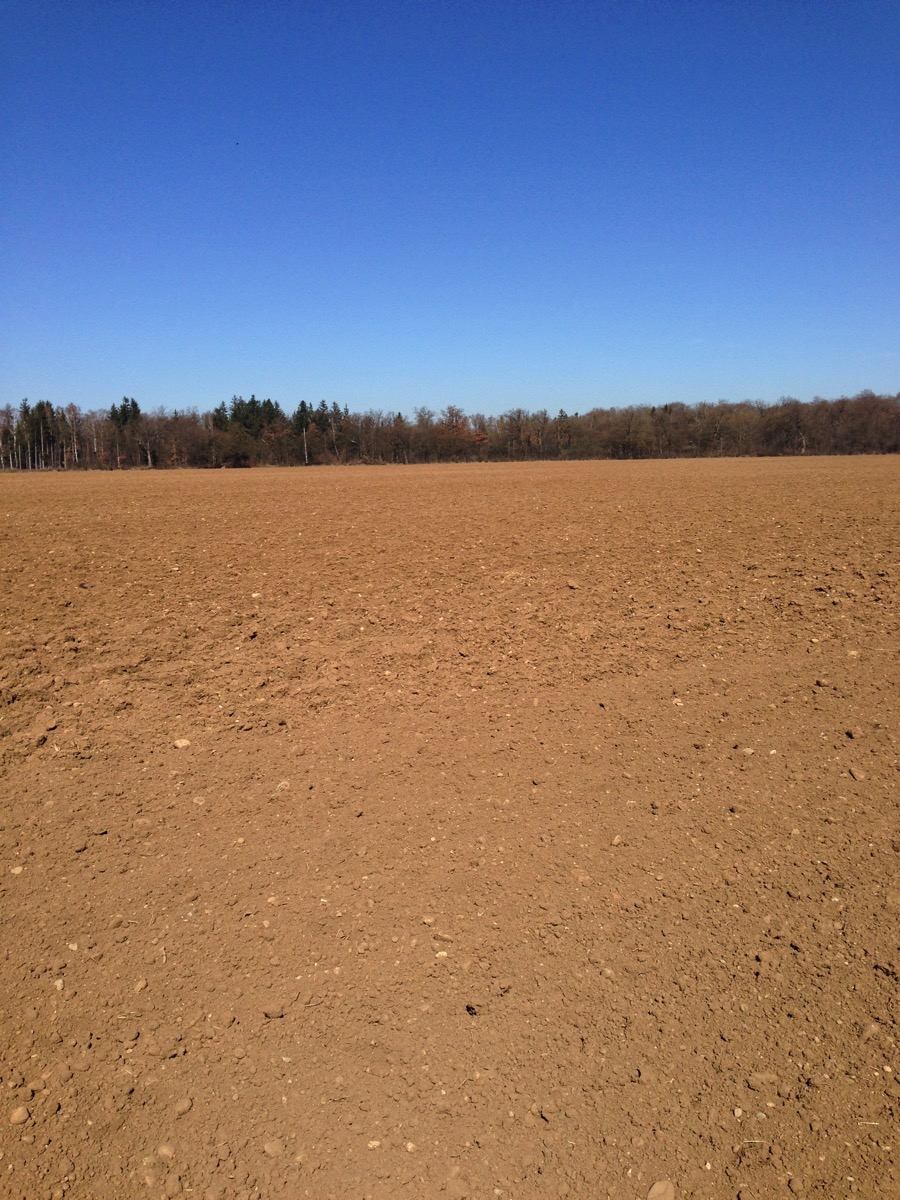 Then I set up a new bullet journal because I had run out of pages on the old one, had lunch: 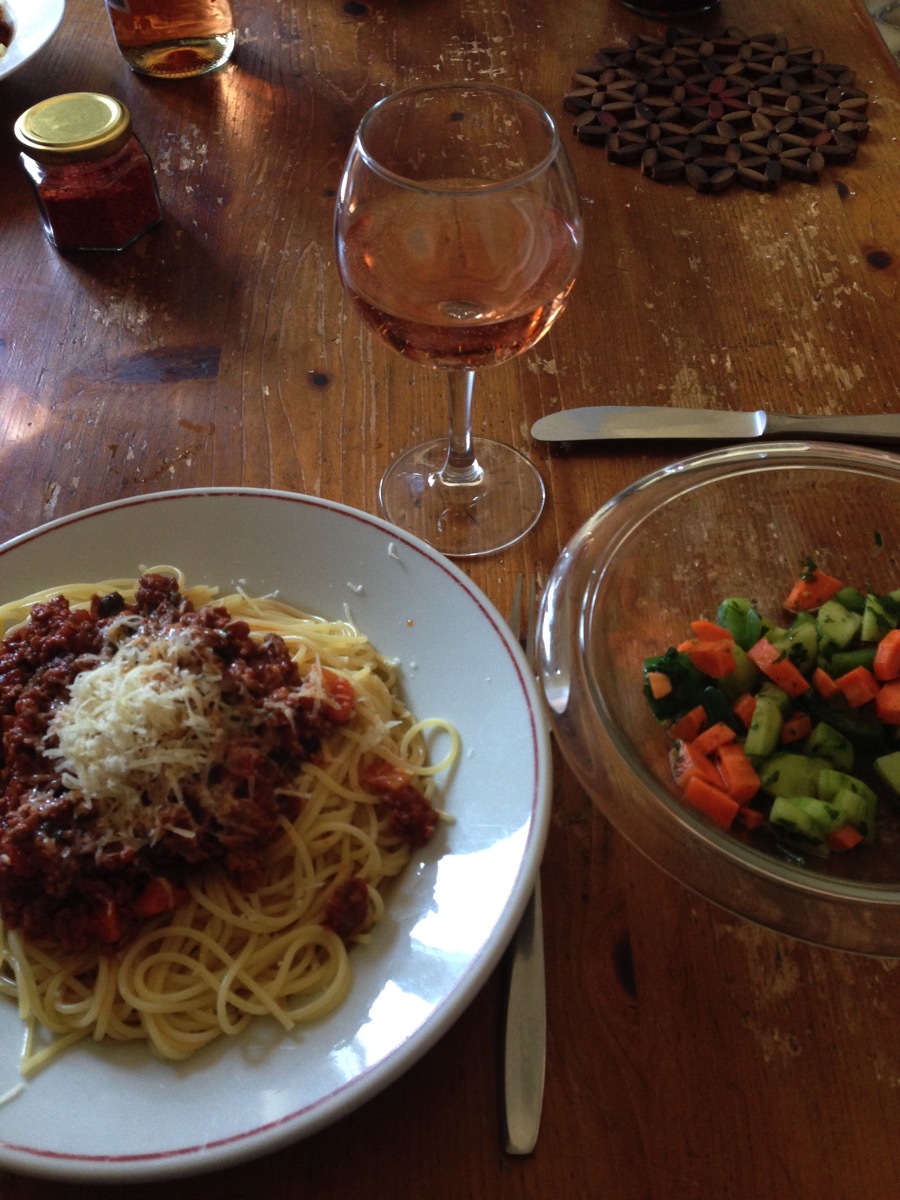 And then I worked on the podcast. This was the first time I recorded audio and video completely separately and then put them together in iMovie. That program is not as intuitive as I had hoped. I wrote show notes, and put in pictures, and learned how to sync video and external audio, and how to separate the recorded audio from the video so that I could discard it.

And then I had to wait until the whole thing finished uploading to youtube. That took a few hours.

In the meantime I had dinner and watched Star Trek TNG with the boy, and made Hefezopf for tomorrow, and then I wrote a little but not the 2,000 words I had hoped for. But when I had made those plans I had also planned to be done with the podcast in two hours or so. So I guess that’s okay.

Today there will be writing, and some music, and the eating of the Hefezopf, and some sewing, and early to bed to get ready for teaching again. Easter break is almost over. I’m okay with that, though.

So I got up a little late, had breakfast and went on my first run in ages. It was harder than before but made me happy nonetheless. I did forget to take a picture while out so here is one of my feet in running socks on my bedroom rug: 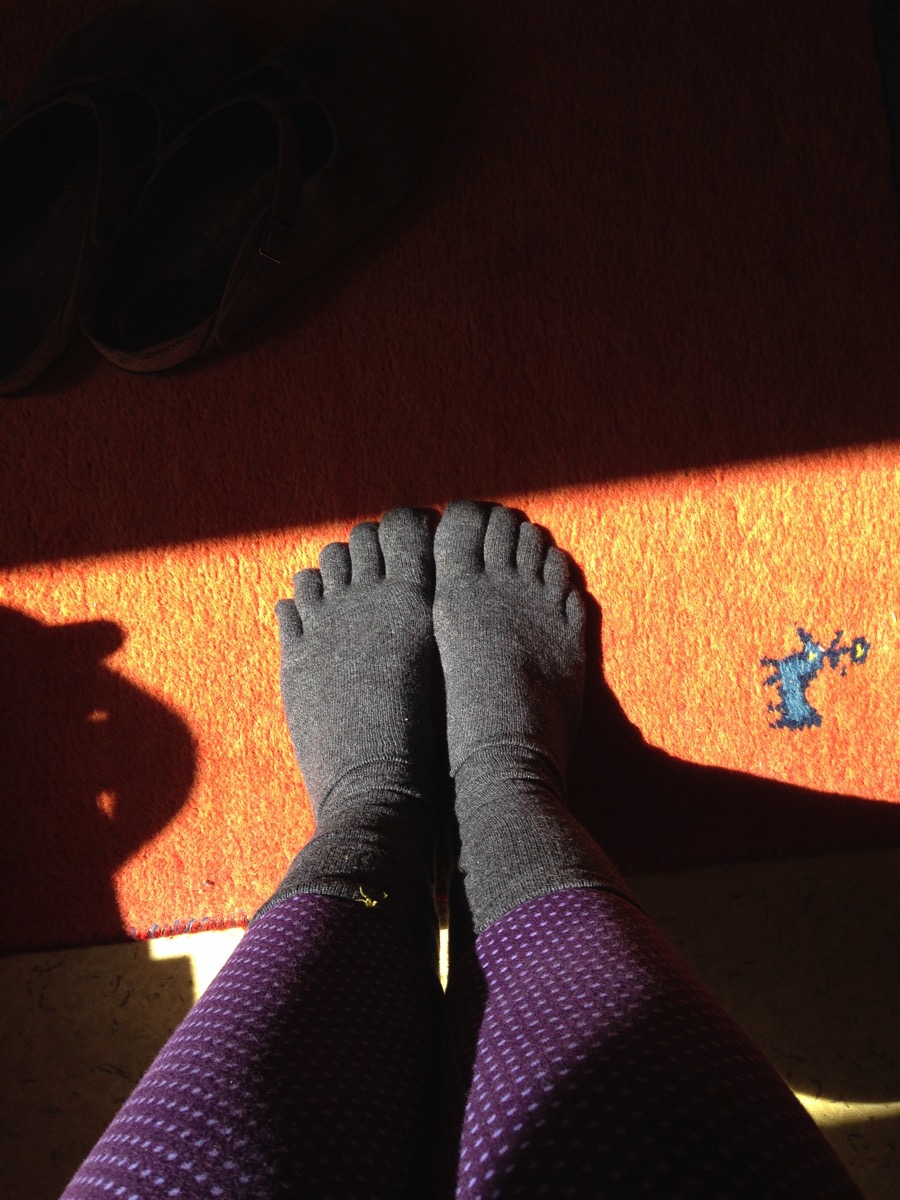 I made lunch for the boy and me. I have really become a bad cook because I never do it anymore. It still tasted okay. Then I waited for the piano tuner to come so he could install the display under the piano keyboard, and then I found myself waiting for my husband all afternoon. Even though I knew he wouldn’t be here before five.

So I bought a new book and read it for hours and didn’t get much done. I don’t like this.

Husband came home around six, we had dinner and talked. His trip was about as much fun as mine. The weather was worse than here and he had a fight with his friend.

There were only 160 words written but I went to bed early-ish.

Today I will have my yearly ob/gyn checkup. When I called yesterday to make an appointment and renew my prescriptions they told me I could come in this morning. Since getting there takes about 45 minutes I’m happy to only make one trip but it will throw today’s plans off.

There might be cleaning, or there might not. There should be the recording of the podcast. I didn’t do it yesterday because I was so busy waiting. There should also definitely be writing.

Well, I did do some things, of course. I sat around most of the day, ate all.the.things and hit refresh on ravelry. I took a shower, and the boy and I went out for sushi for lunch.

I taught my one student and afterwards the boy and I sat down in front of TV, watching Netflix while eating potato chips and gummy bears.

Not the most productive of days but I guess I did need a day off. I definitely did not need that many gummy bears. It’s time to go back to eating low-fructose, this kind of binging makes me feel horrible. Even if I do it because I feel bad and want to feel better. Bad move. Every time.

Today there will be running (yes, I will do it – no really) and the cooking of lunch, and probably the recording of the podcast, and maybe the piano tuner will come and install that final really small sliver of wood, and my husband will be back from Italy.

Maybe I should schedule the piano tuner, do some test recordings for the podcast, and do the actual recording tomorrow when there is no danger of all the people ringing the doorbell all the time.

There is lots to do. As always. Laundry and dishes and exercise and such.

I really should write a lot today as well. I hope the habit of not writing will go away. And the habit of constantly eating things that don’t agree with me. In my head the two are linked as well.

It is a little tiring to have to relearn good habits all the time. I’d rather be someone who changes their behavior and has it stick. Alas, that has never happened to me.

So once more into the breach.

Being home is just the best.

Travel yesterday went very well. I’m glad that I took an earlier bus and train because of the construction but traveling for eleven hours is a long day. Sitting around at train stations waiting for an hour is not the most fun thing to do either.

For once I did not set an alarm and managed to sleep in. Until 7.15. Ahem.

I will need a little time to process the trip.

Today I want to have as regular a day as I can manage.

There might be running, and teaching of one student, and laundry, and lots of watching Star Trek in the evening, and not much else, I guess.

Tomorrow my husband will be back, at least that’s what the boy told me.

The boy was very happy here, being mostly alone for two days. He did have lunch with his grandmother every day, though.

I just spent four days waiting, being talked at and being bored.

I managed to write two days but everything deteriorated in the past two days. Writing on trains is hard because there are always people talking. I have no idea how people write in cafes, I find it impossible.

Getting food that does not contain too much fructose for me while traveling is nearly impossible. Maybe I should have lived on fries.

My mother was already speaking of my visit next year. Humpf.

Maybe I’ll just stay in bed today and do nothing. I’m pooped.

So another rather lazy and chatty day with my parents.

The big thing for the day was going out for lunch. The food was amazing, veal cutlet with mushrooms and croquettes, some soup before and chocolate pudding afterwards.

I chose to walk back because otherwise I would have spent the whole day sitting. Half an hour walking was really nice.

Then there was more chatting and TV (at the same time) and cake and tea and more food and then my father asked, „So, when are you making that Hefezopf? When I told him that I had decided not to he informed me that it has been decades since he last had some. So I got up from the sofa and made some: 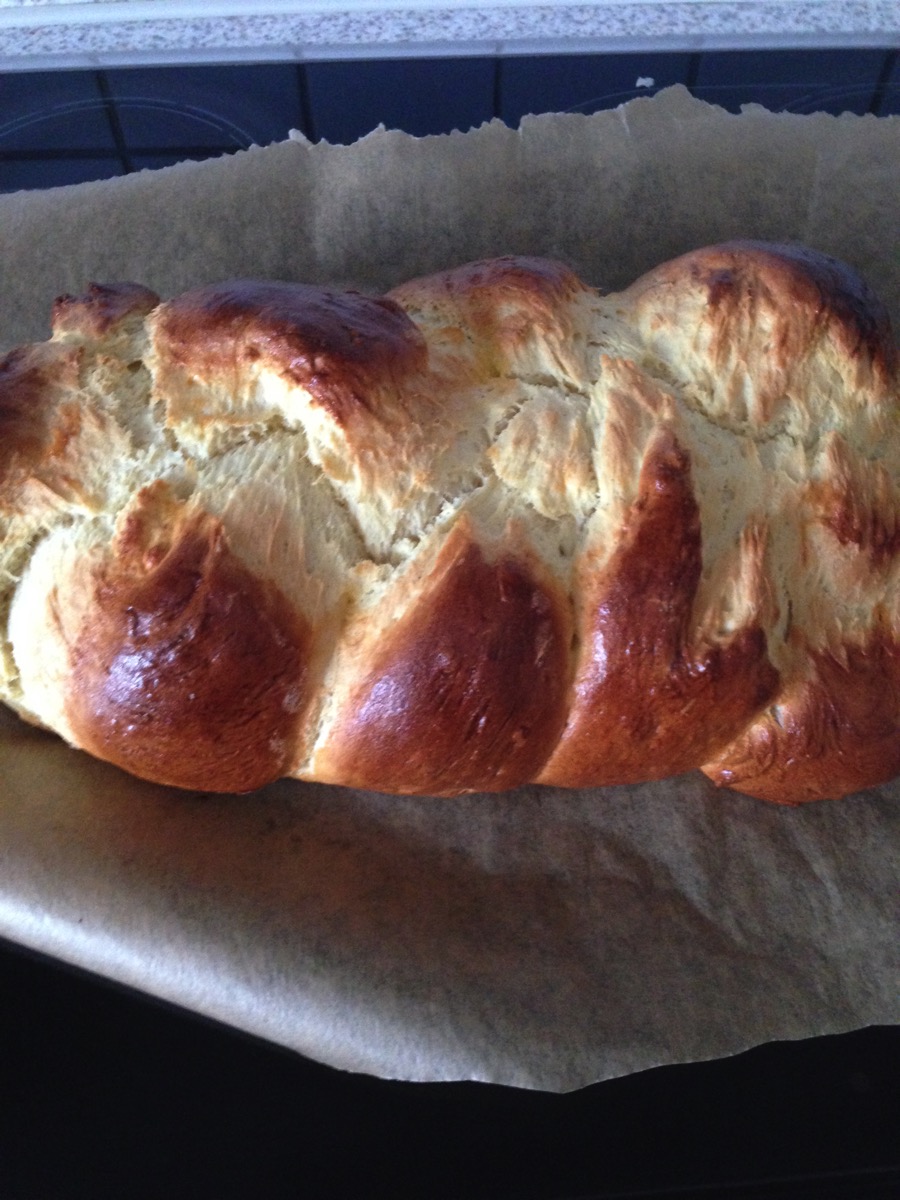 I will have to leave an hour early. After a good hard look at the train and bus schedule I decided to leave an hour earlier than that, even, so that when one of the buses or trains is late (which they will probably be) I will still catch the original trains. My ticket was pretty cheap but I am bound to take certain trains. Because of the construction there should be a way around that but the fast train that I’ll take from Hannover to Munich is always really, really crowded so I’d like to be able to take advantage of my reservation.

Also I’m supposed to arrive at home around 9.30 pm and that’s late enough.

Yesterday, the boy sent me a message asking, „So, when you will be home today?”

Um, not yesterday. Today. In the evening.

Leaving two hours earlier will mean getting out of here earlier. So that’s good. It also means traveling for ten hours instead of eight which is not quite that good. But I already picked out a burger chain to have lunch in along the way.

So I’m really hoping everything will go smoothly, and that I won’t die of boredom halfway home.

I have knitting and reading and podcasts and spinning, so I should be fine.