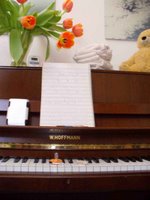 For some years now I’ve been working on nurturing my inner child, letting myself have fun and play. This is a good thing, especially when you want to be creative … (Or organize your life, check out the brat factor).
But lately I found another part of me that needs working on:

The part of me that says: “I know, you really want to eat more chocolate right now, but since you’re only wanting it, because you’re tired, you’d better go to bed. The chocolate will still be there tomorrow.” And for years I had told myself to shut up, ate the chocolate and didn’t go to bed on time. Afterwards I’d complain: “I don’t know what to do, I really shoud have gone to bed earlier.” (And not have eaten so much chocolate). Lame. Pathetic.

Then I found a whole website dedicated to diet journals. Dozens of women complaining that they were not able to resist the cake/chocolate/potato chip/whatever. As if it attacked them and forcefed them. Or me.

So my inner mommy made up a couple of rules for myself (actually I copied the ones I made for my son – only his rule for drinking alcohol is different from mine), and I stuck to them. Amazing. Why didn’t I think of this before? And after being quite stern with myself, once in a while I can say “Okay, but only this one time.” and break a rule.

And since every single journal entry I did for the last weeks started with “I’m so tired.”, I’ll pull out the extra motivational tools. From today on I’ll get a sticker on my calendar for every day that I go to bed on time.

For my inner 3 year old.

Somewhere I read that parenting is the hardest work in the world. Well, it is in a way, but so is living. And like living you just do it, whether it’s hard or not, because what else can you do?
And like living your life you can either rely on instinct and just do it or strive to do it mindfully, in beauty and truth.

I’m not really comfortable with the “instinct-approach”; maybe I would if it were working. So I’m one of these parents who are constantly reading parenting books. I’m excusing this with being a teacher, so knowing more about education and children is a good thing, and I really love to read as well.

Everytime, I read a parenting book that contains more than merely receipts of “how to put your baby to sleep” (haha, I could put him any way I wanted, he just didn’t), I feel elated. (I’m referring to books like Everyday Blessings as opposed to the Ferber method, for example).

Everytime, I try to carry this feeling of elation and purity with me, and to be super-mom to my precious son. Until it turns out he’s wanting something again, like watching TV because he’s to tired to go to bed (which he’s never allowed at all, no TV in the evenings for him), and we end up with a shouting match and a full blown temper tantrum. Sometimes tantrums for both of us. Because nobody can trigger you like your own kid. (My husband at least shows some restraint, when getting angry.)
Afterwards, both of us sit there, mother and child cuddling, feeling ultimately exhausted, and don’t quite know, what we did wrong. Since I’m the grown-up, I should have been able to contain my anger; to see were this has been leading and not to let it happen.

But lately I’m not so sure anymore, whether I did something wrong. Not that I’m thinking “This is only a phase, tantrums happen, he will grow out of it.” (All of life is “just a phase” and, eventually, we will grow out of it.) But this “phase” – as every “phase” – is about learning something new. And in a way it never leaves you, even when you’re almost forty years old and never would be kicking, hitting and screaming in public.

You see, last week my son and I had a major fight over something small – and it’s almost always something small. It lasted about an hour, both of us alternately screaming and trying to make up, him crying, and crying. – It was horrible. And we both vowed, not to fight like this again. I announced some new rules to minimize further conflict, and promised myself to put him to bed earlier.

We were both so shaken; and this little 3year old as weel as me, or maybe even more so. So he was really nice the next day, and the next, and tried to do everything asked of him. He tried so hard not to become angry, to restrain himself and to act like a grown-up. And then – of course – he blew up – in kindergarten.

His kindergarten-teacher was stunned. He had been exploding because he didn’t want to drink anything, and – he didn’t want to have a water-bottle with him. Very logical. So I finally figured it out: these tantrums were about venting frustration. About adjusting to the new situation of being in kindergarten, and of growing bigger and bigger but not real big. His life just is a little to exciting for him. Even ‘though he loves going to kindergarten, it’s a big change. And he isn’t a grown-up, he’s three.

So my task is to find a way for him to cope with his anger and frustration, and the feeling of life being a little overwhelming. How can he release all this tension wthout having to fight with the people he loves. And before being able to show him this, I might have to learn a little more on it myself.

Maybe he needs something physical; time to pull out the bike again …

When I started this 15-minutes-a-day-thing it simultaneously felt like defeat and like a new beginning.
Why defeat? Because “everybody knows” that playing only 15 minutes a day helps nothing. You know, real musicians practice for hours everyday (until they know how to play and then they can stop practicing and play only shows five days a week). So I can’t be a real musician. Okay, I’m only faking it.

But then my real adult mind knows that I have to start somewhere (again) and even 5 minutes will be better than zero minutes. And if you have a real life with child, partner, house, garden, work and friends you often don’t have these essential 2 to 4 hours for music. And when you start doing it for 15 minutes more often than not you end up sitting at the piano as long as you possibly can. And if you don’t you’ve just done the equivalent of a musical warm-up for 15 minutes.

So, after viewing a couple of blogs (and finding most of them astonishingly dull), I decided firstly to switch to English (which most people understand in some way) and secondly to either post a little more often or cancel the blog.

I even considered renaming the blog, since the diaper part of my life has been reduced to one per day (or to be precise – by night) and the music part is not flourishing madly – but I’m hoping for spring.
Have been a wildly optimistic person for all my life regardless of circumstances.

So I’m mothering and making music and doing housework and a million zillion things a day like a lot of women. You’d think that having your preschooler finally in kindergarten would make live easier on the music front, but for now we’re living in constant upheaval. But then, there’s nothing special about this. The whole family is thriving on drama. ‘Though recently we started trying to calm things down. (And we’re almost as successful as this wording.)

So instead of making big, big plans for a big CD of my own, I opted for the babystep of playing the piano every day for at least fifteen minutes (FlyLady-style). Sounds marvelous, doesn’t it? You can almost feel a big musical project taking shape. The reason for this plan was the realization that it’s a little unfair to tell your students to practice without playing yourself, and the maybe more important reason was my realization that my piano-playing just isn’t good enough to make my own songs.
And when I succeeded in playing five times a week, suddenly my playing grew much stronger. I gained a feeling for the piano I never had before. Because my practice was not to be mere playing while thinking about something else, but practicing the same things I always thought boring and practice them mindfully.

I’m feeling quite strange. I, me, sitting at the piano, playing scales and chords and all that “boring” stuff and all the while enjoying myself tremdendously. Who would’ve thought?