Well, it was edible and it did taste good but still.

I slept late, until 6.30 which meant no time for morning pages again. But I did yoga. Breakfast, all the usual, calling my mother, doing the dishes and then it was time to start making pasta dough. That went well.

We attempted to make pansoóti con salsa di noci. While I was waiting around my husband was busy cutting herbs in the garden. He found out that 100 grams of parsley, or basil, or whatever are way more than he thought. Which meant we didn’t have enough. Bummer.

I hadn’t read all the way through the recipe before because the cookbook had been somewhere else and my husband had looked at everything in depth. Only when I looked again I found out that we were supposed to skin the walnuts. That was the point at which the pasta should have been in the pot, boiling. Um. So we set out to skin walnuts. And improvise around the lack of herbs. Spoiler: we ended up eating lunch at 2.30, ninety minutes too late.

Only when we were right in the middle of the walnut-skinning did I notice that we didn’t need those for the filling, they were for the sauce. So I rolled the dough out and my husband put a jar of pesto Genovese into the filing so we would have enough and I set out to make the pansoóti. They looked horrible and I was completely sure they would all open and loose the filling in the cooking. (They didn’t.) Behold the meal that took two people 3 1/2 hours to make: 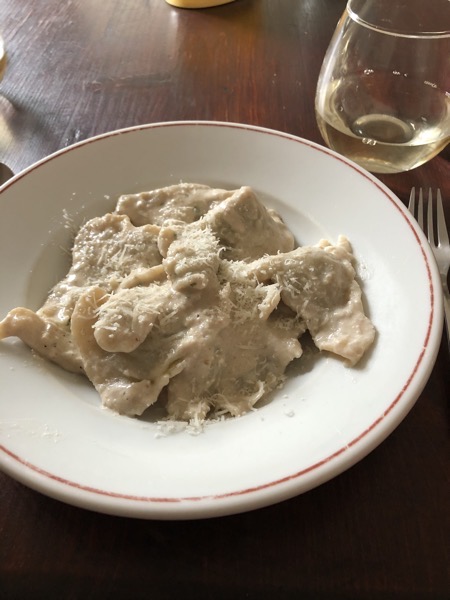 There should have been decorative walnuts on top but we – didn’t have enough.

As I said, it doesn’t look like much. It did taste great, though. By the way, we ended up with three quarters of the filling left over. Maybe I was doing something wrong but in my experience you can only put a tiny amount of filling in if you don’t want it all to squeeze out on the sides. Might be my lack of technique but I don’t know.

So, we decided that we probably won’t make this recipe again, and if we ever do so we’ll make way less filling.

When I started writing this post, Sunday evening at nine I still hadn’t done the huge pile of dishes and pots from the whole cooking endeavor because I was just so fed up with everything.

After lunch the boy talked at me for ages and showed me memes on his phone. (Note to self, the boy gets talkative after drinking wine.) Just when he had left my husband showed up to tell me something I had already read before.

I had lofty plans for my afternoon but did nothing at all. I did practice a bit Chinese but not much. At dinnertime the boy informed me that he was too busy to watch anything together so I watched two episodes of ‚Accidentally in Love‘. I’m actually happy to be finished with that series. It is nice but was going on my nerves on and off. Then I started watching ‚Ice Fantasy‘. I made the mistake of turning the subtitles to Chines as well and that made the whole thing feel rather surreal. Not only can’t I understand anything I hear, I also can only read one character in every six or so and reading, „I something something something of something something something very of something (particle that means something in the past)“ is a bit tiring and doesn’t help immerse you in the whole experience. So I switched to re-watching „The King’s Avatar“ with Chinese subtitles. I still don’t understand much but at least I have watched it before and know what happens.

I am rather frustrated with my progress learning Chinese. I only do the bare minimum on the Fluent Forever app because it is so irritatingly hard. I do more on Duolingo but while that is fun it doesn’t really teach me anything. And I completely neglect practicing Chinese characters and the Pinyin trainer. Pinyin is the official way of transcribing Mandarin Chinese with the Latin alphabet and the app I have helps you to learn distinguishing between sounds that don’t make a difference in meaning in any of the languages I learned before but are crucial in Chinese. And the tones. It will take some more time for me to actually understand that the same syllable said in a slightly different way, like the difference between „What?“ and „What!“, can be two completely different words.

And then you hear people talk in real life – or rather in TV shows which is not quite the same – and all the words run into another and sound completely different yet again.

Well, what was I expecting. Chinese is very hard to learn for someone growing up speaking German. If I had wanted something easy I could have done French or Italian. I’m still thinking about the guy who is behind the Fluent Forever app, though, he started learning all these languages because he wanted to become an opera singer (completely normal, by the way), did a few weeks of full immersion German in the US and then ended up in Vienna. Ha! I’m guessing here but I bet he didn’t understand a single word at first. (Same happened to me when I moved to Munich from Westphalia at the age of 18. I couldn’t understand anything.)

Sorry this is so chatty. I mostly listened to other people all day, had two beers and am trying to avoid those dirty dishes.

Then I put the „We’re not so different“-podcast on and powered through. Great podcast, highly recommended.

So no, I did not prepare any lessons for this week, I did not plan ahead, I did not write anything, nada. My to-do list looks awfully unchecked. But now it’s a new week and everything will be so much better. For sure!

Since today is Monday I will be running and teaching. There will probably be lasagna for lunch because there is still a lot of it in the basement. Wish me luck that I will make use of the one-hour break in between students in the afternoon. I have a long list of stuff I promised my students.

At least the crochet blanket is growing at a steady pace.