I almost got enough sleep! Yeah? This is what I saw when I looked outside: 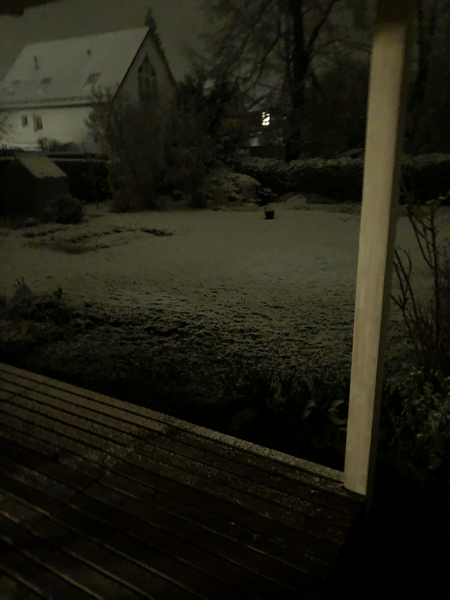 Snow! It was all gone by the end of the day but still, it was a cold day.

Did morning yoga and meditated and then had breakfast. Spent time with husband. He built a fire in the wood stove for warmth.

The boy woke up without prompting but did not come down for breakfast at all. He instead had lunch as his first meal of the day. Whatever.

I did the dishes and such and went out. First to the tea shop where I bought all the pu er, some de-caffeinated Darjeeling, two other types of Darjeeling and some Lapsang Souchoung. Unfortunately, the owner of the shop wasn’t there, instead I dealt with her daughter. She might be nice but she doesn’t know a lot about tea so my plan to have someone help me choose did not work out.

I have to say, being in that shop for ten minutes or so was the unsafest thing I have been doing for months. The sales woman pulled her mask off the second she was behind the plexiglas partition, did forget to put it back on again when stepping to the side twice and wore it as a chin-strap while on the phone. None of the windows in the shop were open and when I asked her if she didn’t feel unsafe she said, no, since she was behind the partition everything was alright. I asked about aerosols and she said that she was clean anyway because she gets tested regularly as part of her job at the airline.

Right. Because the test makes you immune?

Needless to say that my mask was firmly on, I did not follow the invitation to sniff the tea and the next time I might opt to order by mail even though I would have to pay for shipping.

Then I walked to the health food store which was blessedly empty, bought a few things and went back home.

My husband wasn’t feeling well so he just ate a few potatoes for lunch but the boy and I had potato salad and tofu brats: 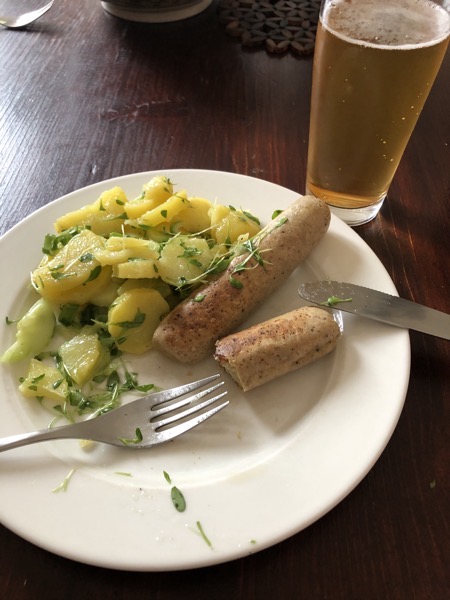 We talked a bit after lunch, I did not do the dishes and somehow the whole afternoon just made poof! I did practice Chinese a bit, I read, I played the silly video game and just when I thought I should really get going my husband showed up to talk about singing and then we both remembered the laundry in the basement and hung that up.

The boy played video games with friends again, so we watched Netflix – or rather YouTube – later than usual, I did my evening yoga and went to bed.

Today there will be running and all the usual.