I was pretty optimistic in the morning, Got enough sleep and did my whole morning routine. But then there were only seven minutes left for writing. So I didn’t. And then it turned out my husband was twenty minutes late again. I could have written for almost thirty minutes. Meh.

I did use my time well, though, because instead of waiting for him to show up I started looking for photos I can use for book covers. I might not have found the perfect one yet but at least I tried.

There were chores, the boy got up without prompting, I talked with everyone and my husband offered to do the dishes. So I went out to walk to the supermarket. Which was super-crowded. Everybody who usually would go to the store on Friday was there too! Because today is a public holiday. No shopping!

I got almost everything but no chervil for the traditional soup. My husband had grown some but it wasn’t quite ready yet. And there wasn’t enough for all of us.

I walked back home with three bags of groceries all sweaty because it was really warm and sunny. Then I went out again to see if there was any chervil to be had elsewhere. I bought more groceries at the health food store. And then I went to yet another store but got tired of waiting outside and just walked back home again.

At home my husband was rather frantic and too late with the cooking. The chervil was not enough and full of dirt and he hadn’t had time to do the dishes so there was no space to cook. Fun!

I plucked the dirt off every blade of chervil by hand, re-arranged stuff, my husband cooked and we had the best chervil soup I’ve ever eaten: 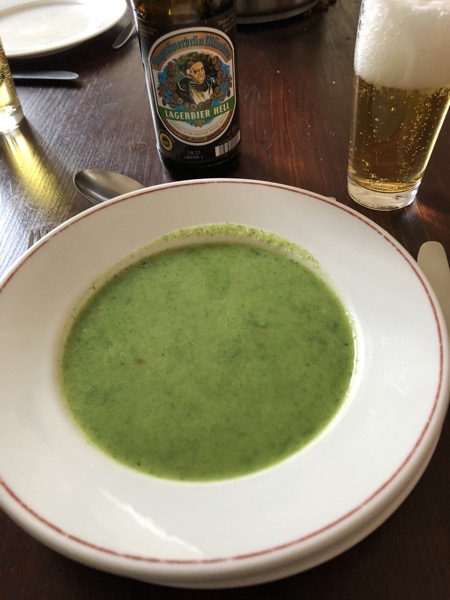 And yes, that’s real beer. It’s the holidays after all. There was even a second course: 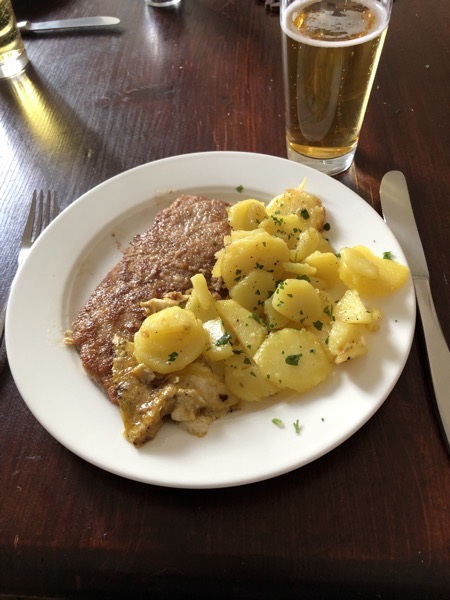 And here’s the vegetarian option with a soy cutlet: 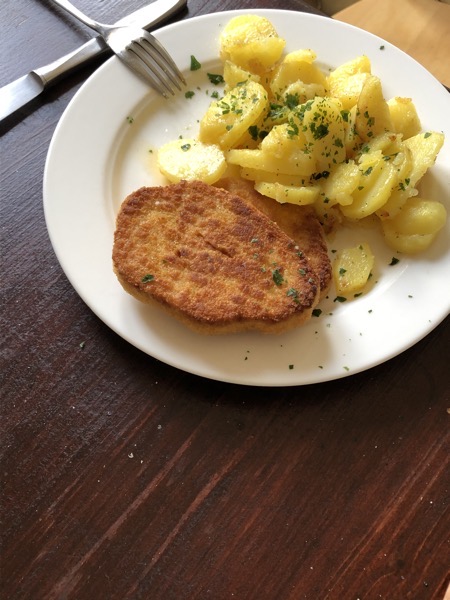 My first and last student of the day had canceled, so I had enough time to do the dishes right after our very late meal. I took a short break eating way too much chocolate and then I taught two students.

Ate some more chocolate, played Duolingo, scrolled through Twitter or something and then it was time for dinner.

The boy and I watched another episode of ‚Enterprise‘ which was a little better than the last one but that’s the nicest thing I can say about it. I also finished reading „Mad about Ewe“. Not the best book ever but very nice.

After that I watched another episode of ‚Find Yourself‘. It’s still so good even with the re-watching that I didn’t manage to stop until halfway through my second episode. I tidied the kitchen a bit, finally put the extra bread in the freezer, started writing this post, practiced some more Chinese and did the first of the Evening Yoga Challenge.

We’ll see how today will go. There will be cleaning even if it’s Good Friday, there will be crochet and reading and the weaving in of ends, maybe some strength training and maybe something productive even.