Since I was so set on getting all the things done on Monday I went to bed too late and that set off a chain reaction resulting in almost nothing getting done on Tuesday.

So, apparently that Monday was a bit too much.

I woke up at 6, rolled out of bed fifteen minutes later, did yoga and decided that it was too late to meditate or write morning pages. (It wasn’t. Not really.) Made breakfast for the boy who was late as well because he didn’t need to leave the house. When he was done I told myself there was no time to write and proceeded scrolling through Twitter and the news. Hence giving up twenty perfect minutes for writing fiction.

My husband showed up, we talked, the usual.

I did most of the dishes but not all because I was still slow and late, went to two different health food stores while listening to a Chinese podcast. Not only do I still no understand anything, this one also came with annoying background music. I have no idea why people insist on putting awful, artificial, cheap music behind their talking voices but I can say that if you do that – I’m out. As a musician it feels like listening to two conversations at one. One is boring and annoying and the other is in Chinese. Um, no.

When I came back a few nice men were operating heavy machinery in front of our garden gate. Apparently, they put new pipes in. So I spent the rest of the morning feeling off because of construction noise.

My husband made chili: 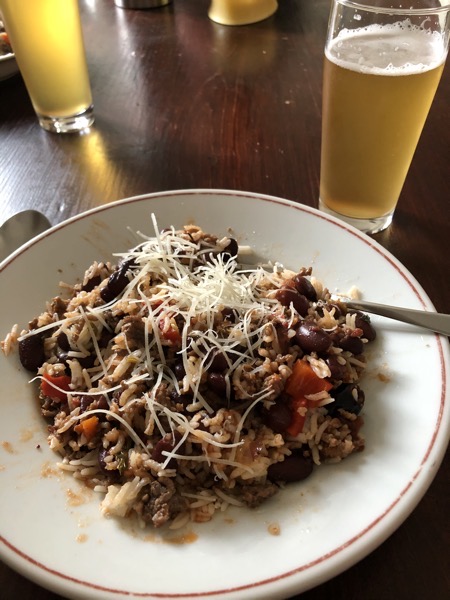 I then had to ask my student when her lesson was because my phone had borked calendar sync. That was fun. I had a long, long break until my first lesson of the day and filled that with, doing nothing, then reconciling my budget which included emptying my wallet and counting all the change. I ended up with about 350 more Euros than I thought I had which is weird. But I checked all the accounts, the credit card, PayPal and cash. And having more money than expected is way better than having less.

I promptly put some of it into my travel fund and the rest into the eating out fund. My husband just told me he had put some cash into his travel fund as well. As a sign of hope even though we won’t be traveling anytime soon.

By the way he seems to feel a little better. Not quite as doom and gloom.

So I taught my three students, did some teaching admin, talked with my husband, started writing this post, had dinner, practiced Chinese and went to bed. No writing.

Today there will be all the things (I hope) including running, teaching way too many students and then I will attend a virtual knitting meeting. In order to make it more enjoyable I will probably leave my studio, connect the iPad to the big TV in the living room and sit there. It’s more comfy and won’t feel like work. The wifi is not as good, though, and I have never tried using Jitsi on the iPad. We’ll see how that goes.