I overslept. Apparently. I remember my alarm going off just before six and the next time I looked on the clock it was half an hour later. In the end I only wrote morning pages and did nothing else before breakfast. There is definitely a lot of room for improvement regarding my morning routine.

My husband woke up and built a fire in the wood stove. He had breakfast and we talked while I was working on the border of the Meadow blanket. I phoned my mother. I started watching a Zoom thing I had missed on Thursday. I even took notes. Then it was time for lunch: 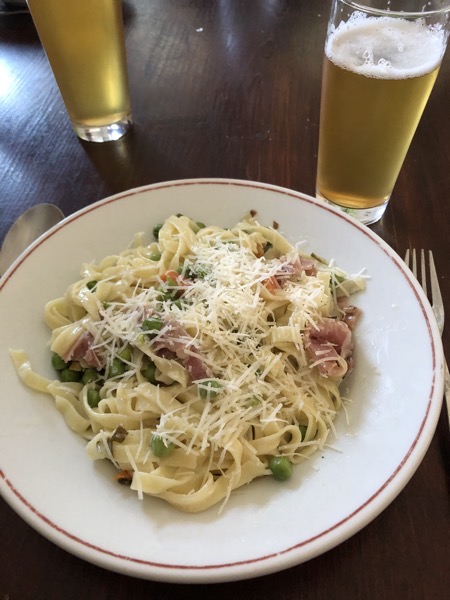 My husband is studying the big Italian cookbook in depth at the moment. The grocery list is growing exponentially and I’m seeing a lot of gorgeous meals in my future. Also, a bit of work with cooking.

I die the dishes with the boy’s help. He has been telling me about the new video game he got. Then I started planning for March and for this week.And copying some lists into my new journal. And refilling two fountain pens. And then it was time for dinner. And watching ‚Star Trek: Enterprise‘. This one was another snooze-worthy episode. I think this might have been the third or fourth episode where one crew member is the only one awake on the whole ship. Horror! Hallucinations! Weird and improbably interactions between people and then it turns out it wasn’t real after all!

After that I watched the last two episodes of ‚The King’s Avatar‘. I’m still finding it excellent even though a lot of the loose threads just remained loose. Like, what’s with his twin brother? Why don’t we see him ever again? How can a big club be sold within a few hours? What happened to Su Mucheng’s brother?

Now I have to decide what to watch next, or if I should maybe pause the Netflix bingeing in favor of doing other things. Like sleeping, maybe. Stay tuned.

Today there will be the running, maybe the cutting of my husband’s hair. Some teaching. Finding something new to play for a student. Writing, blogging and a Facebook live-thing in the evening.

This week will be slightly crazy. My schedule is full of teaching and evening video call things. Every evening but Friday. So yeah, I better don’t start watching a new series…