Woke up at 5.30, not enough sleep again. Note to self: get up from your chair immediately after turning the TV off. No, I mean it. Really.

Did that thing where I lie in bed staring at the ceiling much longer than usual. I had to think about the fact that music schools will be allowed to go back to in-person lessons starting next week. Before the end of ‚lockdown‘. While the numbers which had been steadily declining in a very good fashion have been climbing again starting the week before.

Um, my husband and I are feeling extremely bad about this and have decided to not offer in-person lessons next week. Most of the students I talked with are completely on board so far. Two of my singing students recoiled in horror at the thought of standing in the same room, blasting aerosols at each other. Even with masks and open windows I’d say this is far from safe.

Made breakfast and fetched the boy who was late. He was sitting in front go his computer at 7 in the morning fully dressed trying to cram for a test about „Much Ado about Nothing“. Apparently he was supposed to know exactly what happened in each scene by heart. Fun! He also left a little late…

Then there was crochet and talking with my husband while he was eating breakfast. I practiced Chinese for half an hour, did the breakfast dishes, ordered some stuff online, talked with my mother-in-law briefly who is feeling fine after her vaccination, and then walked off to the supermarket.

I was wearing my new red boots! 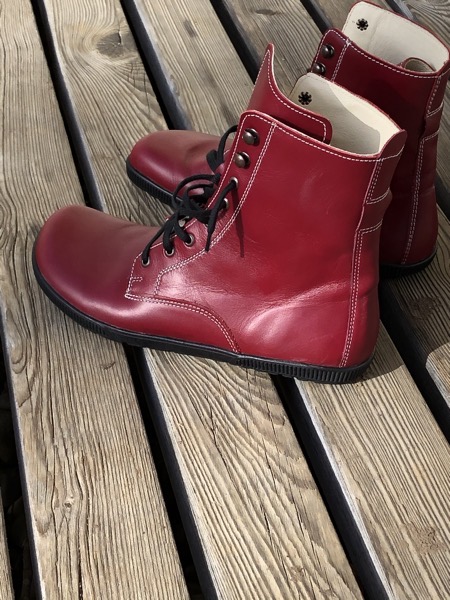 I had ordered them in September and hadn’t even tried them on yet. I had been waiting for a special occasion to wear them and yesterday I decided that walking to the supermarket in gorgeous spring weather had to be special enough. I’m happy to say that they fit and don’t chafe anywhere so far.

Back from the supermarket my husband told me that lunch would be late. I helped form the dumplings and yes, lunch was very late. It was a lot of work, though: 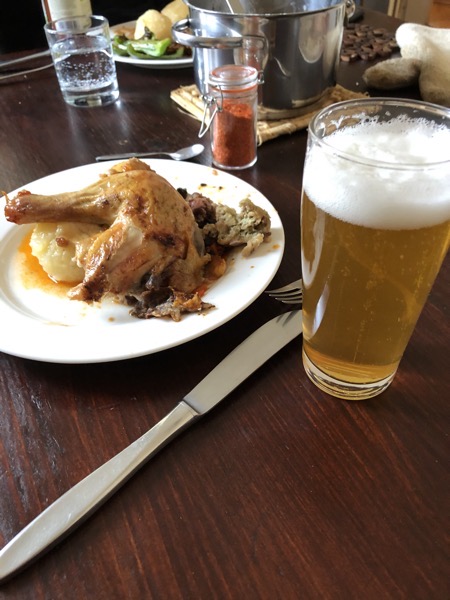 We had a whole chicken with filling. The potato dumplings were from a package. So there was almost no break after lunch and no time to do the dishes.

I thought I’d have a long, long day of teaching ahead but then two students canceled and I had a nice comfy break right in the middle. That was nice.

Started writing this post, had dinner, watched some Chinese TV again, gave up on the dishes and went to bed almost on time.

Today there will be the cleaning of the poor, neglected house, teaching only two students and maybe something productive in between.