I didn’t actually fall asleep again after the alarm but I definitely dozed. So, no morning routine but I made breakfast in time. No writing.

Stepped on a train to the next small town over so I could renew a prescription. There were barely four people with me on the train, all masked and far away.

I went to the nice health food store and bought meat, chocolate, veggies and three bags of my favorite potato chips. Came back home, unpacked groceries, went out again to the pharmacy and had lunch: 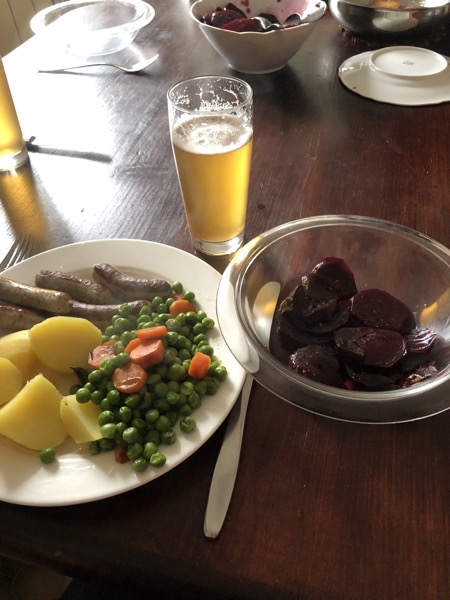 Sat and read, I have found my way back to the „Fluent Forever“-book and am enjoying it a lot. I did the dishes and practiced Chinese until it was time to teach. And then my energy fizzled out and I had that feeling again, like I have a headache only without the pain. I’m beginning to think that that might be a stress symptom, maybe also a sign of sensory overload. Seems my little trip might have been too exciting. Also, I definitely should get more sleep.

I got impatient with my iPad keyboard not getting shipped, canceled my order and re-ordered from somewhere else. It should be here by Friday which is nice and much better than the February 12 to March 18 window I had been staring at for a week.

After teaching I wrote a couple of emails, ate dinner with the boy, watched an episode of ‚Love O2O‘ almost to the end, then had a lengthy discussion with the boy about all kinds of things. He was the kind of talkative and passionate that he gets in the evening and I was the kind of cranky I get when my day should have been over an hour before.

I did get to show him a particularly nice scene I had told him about when I watched it before (and he liked it) and then we talked some more and I was all awake again. Still no energy, though, so I did that thing where you sit around looking at stuff on your phone while getting too tired to get ready for bed.

Started writing this post two hours after my bedtime, planned the next day and went to bed.

Today there will be some walking/running, lots and lots of teaching and probably not much else. I’ll also be waiting for news about what will happen next week with ‚lockdown‘ or schools reopening or whatever. I’d rather know beforehand. Definite answers will probably not be here before Friday.