I had one of those mornings where I’m totally determined to get all the things done and set my alarm early and then get sidetracked right after waking up and then the day is lost. This time I felt the urgent need to research running apps because the one I’m using is acting up and I’m not all that happy about it.

I felt totally defeated after that and was a complete bundle of joy for the rest of the family. At least the boy did not have a fever anymore and was starting to feel a little better but leaving him home for the day was exactly the right thing to do.

I did huge pile of dishes with my husband’s help. I walked all the way to the supermarket and got groceries. I had hopes of writing before lunch but there was no time and my mood became even worse.

At least lunch was good. (I know, it’s not much to look at): 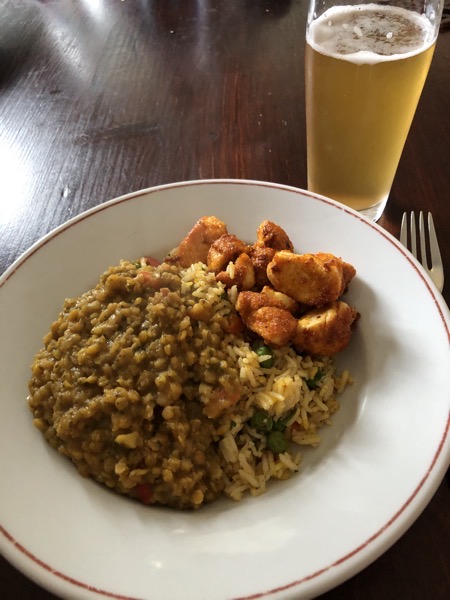 I did the dishes, took a short break and decided to pull myself together. Just because the morning didn’t go as I wanted didn’t mean the day had to be a lost cause. So I made a plan for the rest of the day. Then a student canceled. And another rescheduled. And so I could do strength training in between students in the afternoon while listening to a short Jessica Abel lecture and I could write for half an hour after teaching.

After that I started writing this post, had dinner in front of TV, did the dishes, did my ten minutes of yoga and five minutes of meditation and went to bed on time. Win!

Today there will be all the cleaning, some laundry, only three students and a long list of things I want to do in the afternoon between students. Also pizza and watching Torchwood I think. I’m already looking forward to it.