I woke up early again after not enough sleep and then thought it would be a good idea to pick up my phone right away and that was basically it for the day. On my list there was strength training, yoga and planning my week but none of those things happened.

I did call my mother. My parents sold their house and moved to an apartment last week. Right now they are without internet or landline but I called my mother on her cell phone. Then she lamented that she didn’t have internet on there so I tried changing her prepaid plan to one that includes data. Unfortunately, this was the day the phone company decided to do maintenance on their website. So, with numerous phone calls and reading out of codes to each other I managed to set up an online account for her that will probably enable me to activate a data plan for her.

I confess to having basically hacked her email because I guessed her password. This was not the first time I had to do this. Yes, I am trustworthy. The boy was a bit scandalized, though.

There was quite a bit of crochet and my husband made lunch. I did peel the potatoes and dice the carrots but these days my husband mostly cooks all by himself. Lunch was very good and I was very hungry: 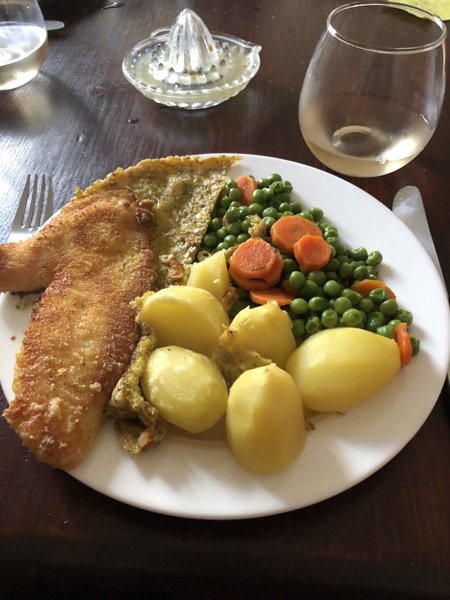 The boy and I didn’t stop talking all through lunch. Afterwards we decided that giving the two of us wine with lunch is a really bad idea. My husband was a little overwhelmed. We did educate the boy about serial music, minimal music and Steve Reich while he kept telling us about noise, industrial and vapor wave. I still have no idea what those things are.

The afternoon just made poof. I did practice Chinese a bit. I also spent money on the handwritten font for my „Chinese Writer“-app only to realize that I had paid for that before. I hope to be able to get those five euros back eventually. I should have looked for ‚restore purchases‘ instead. Dumb. OTOH five euros are not going to break the bank so I’ll be okay with it.

I did spend some time in the afternoon helping the boy with taking a picture of his experiment setup for his paper. Turns out learning about composition and design does help in helping someone frame a photo after all. Huh. He finally managed to send his paper off. Then he had a scare because his laptop fell down and afterwards seemed to be broken but that was all cleared up later. Phew.

I heated some frozen pretzels for dinner, we watched an okay episode of ‚Star Trek:Enterprise‘ and I watched episode seven of ‚Love O2O‘. I decided to re-watch the series because it is actually good instead of trying out something mediocre.

I did some shoddy planning for the week and managed to go to bed almost on time.

And now for a brand-new week.

Today there will be running/walking, lots of teaching and not much more. I did research Yak Trax because the paths are still super icy and slippery around here. I’m pretty sure those won’t work with Five Finger shoes but I could maybe use my normal sneakers instead? We’ll see.