Which isn’t really true, of course. But I’m going to bed too late because I am not content with what I got done that day, then I don’t get enough sleep, have a hard time getting in gear the next morning and move very slowly through the next day while eating too much because I want more energy.

I do get things done like dishes and grocery shopping and teaching but not much else. There’s a lot of that small stuff, though. And the hand-holding for the whole family, myself included.

So, yesterday I got up early enough to do yoga but not early enough to write, went go, go, go all day, got into an after-dinner slump and decided to not write yet again so that I could go to bed at a reasonable time for a change.

Lunch was kale stew (okay, we cook everything separate but traditionally it should be stew because where I grew up it’s always stew). My husband did all the cooking by himself while I was out at the supermarket. And lunch was delicious: 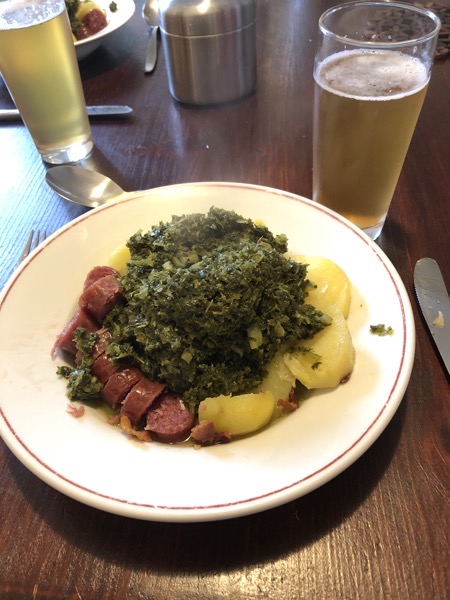 I bought another book about writing lots of fiction words each day because owning that book will certainly make me write faster. Oh, and my Mandarin Chinese phrasebook arrived. It’s really cute and looks rather useful. And I finally learned why I haven’t been able to find out what ‚yes‘ means in Chinese. Because – there is no word for it at all. They use whatever word was used in the question. Huh.

That also explains why the boy and I thought that ‚yes‘ translated as ‚shì‘ 是. Because that’s what they say most often in ‚Eternal Love‘. ‚Shì‘ means ‚be‘. We were confused because they said other things when they meant ‚yes‘ as well. So now I know. (And I found out how to type Chinese characters! I just hope it will show up on the blog properly as well)

So. Today there will be the cleaning of the house, only a medium amount of teaching, the wasting of time between students (it’s traditional at this point) and the watching of ‚Discovery‘ tonight. And then the weekend.