Not a good day on Tuesday and not a single word written. On Wednesday I woke up too early, I guess I’m pretty tense again, it’s the whole pandemic and numbers going up where we live. Apparently it is the most important thing ever that schools stay open and so they cram all the students back into their classrooms. I just hope that the masks and the open windows will make a difference.

I did not write in the morning, yet again, but I did do yoga and meditated. I am still extremely stiff, skipping yoga for most of last week did not help. I do love the yoga in the morning, though, even when it cuts into my writing time.

I only had a bit of time before my husband’s breakfast and chose to spend it on formatting a short story that I had already written. I’m falling more and more behind with NaNoWriMo but reminded myself that the goal is not to write 50,000 words this month and then not write for the rest of the year but instead to move my writing projects forward inch by inch. Sometimes that means writing, sometimes it means bringing something closer to being published. And all in all sending that story out to my newsletter subscribers will be more important than those 500 words I could have written.

I did some crochet and tried being really efficient and productive but failed. I did order Cal Newports new planner at six in the morning, though, so that will surely help and make me vastly more efficient. (I found it funny that he claims time-blocking makes people twice as productive in his email and then turns around and in his promo video claims that it makes them two times more productive. Oops.)

In the vein of being productive, I did use the time when my husband was tending the wood stove to finally make an appointment for the boy to get the inoculation against HPV. Why yes, he was the one insisting on getting vaccinated against something he can’t catch himself.

I did some Duolingo Chinese lessons that took me longer than expected because I didn’t want to stop. I still don’t really understand anything, by the way, and get all the numbers mixed up. Also, I have reached the point where there are several words that transcribe as ‚shi‘ and I can’t tell them apart because I can’t remember the tones. (The boy assures me that that is perfectly normal because my native tongue (and all the others I have learned on the way) is one where tone makes almost no difference in learning. And just that morning I caught myself wanting to indicate a question by changing the pitch of my voice but that’s not how Mandarin works. It’s all very interesting.) 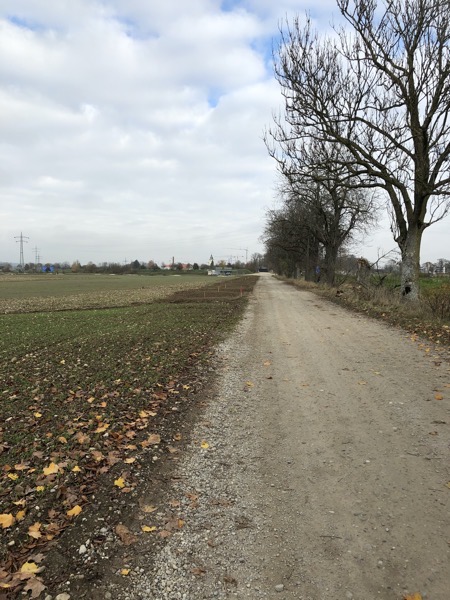 It was gray and cold and there were quite a few people out running and walking. It seems that closing all the gyms does make a difference. 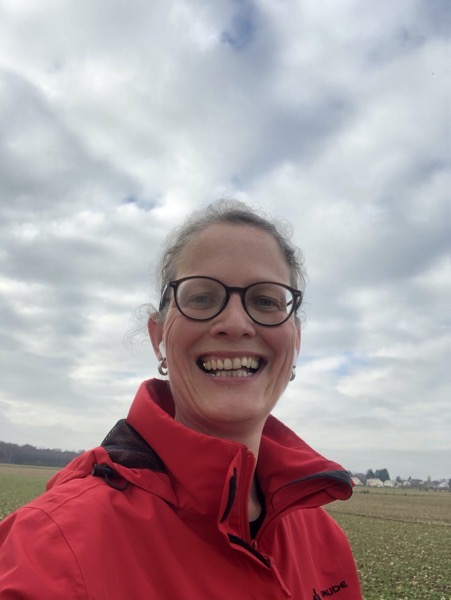 My glasses kept fogging up. I didn’t wear my contacts because my eyes are sore and I maybe have a kind of bacterial infection. It’s clearing up already but glasses seemed the better option.

Then we cooked from one of my Chinese cookbooks for the first time: 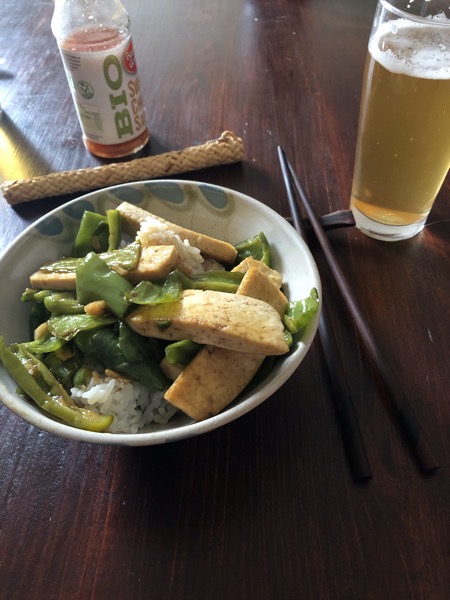 Green peppers with tofu and rice. We had lots of green peppers from the garden and I had bought too much tofu. When we talked about what to do with the tofu I remembered one of m two Chinese cookbooks that I haven’t really looked at yet, „Every grain of rice“. It is specifically about the kind of food people cook at home and this has just the peppers and tofu with a bit of soy sauce. (Husband chose to do the variation with garlic and ginger because only using four ingredients is completely alien to him.) My husband is trying to learn how to cook things that are easy and fast and don’t require a million things to be chopped, fried and prepared in separate pots.

The whole thing was delicious and will enter the regular rotation from now on. Oh, and this happened: 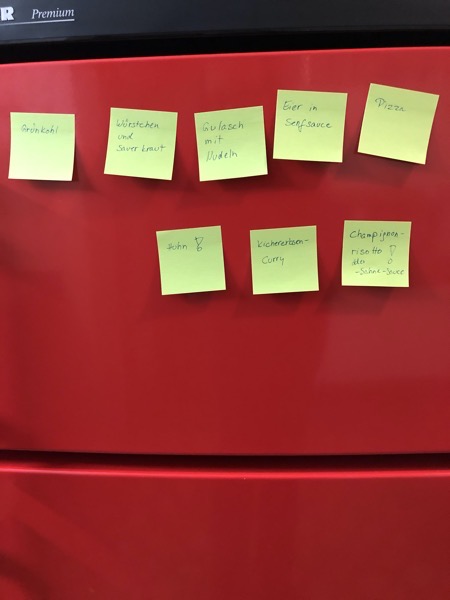 Meal-planning! We have been thinking hard about possible things to eat and especially my husband has been making notes and asking me to buy certain foods but then we often forget what we have or I buy kale at the supermarket but we don’t have the sausage we like to eat with it. So this time I actually made a proper list before shopping and then put the meal ideas on the fridge and – this is making me really excited! – I put big exclamation marks next to the things we should eat before the’ll spoil. Which means we will eat something with mushrooms today, probably pasta with mushrooms in cream sauce because we have lots of mushrooms and some cream that won’t keep forever.

After lunch it was all teaching all afternoon. Because of my week off I actually enjoyed it and was patience itself.

Then I ate dinner, did the dishes with my husband and started writing this post but the boy came downstairs and we started talking.

Two hours laters I finished writing this post and gave up on writing my words for the day or on getting enough sleep. On the other hand I learned all about the two lectures the boy attended that afternoon, one about becoming an entrepreneur and the other about terms for students. As in ‚special words used at university that you might want to know‘, by the way. „Begriffe der Studienwelt“ doesn’t translate well.

So. Today there will be more writing than yesterday and the day before (too bad I don’t count blog posts), the weekly walk to the supermarket, lots and lots of teaching and something from the list. For the first time in ages I have made a weekly plan that includes some of the niggly small things and it is making me really happy to cross off things like the doctor’s appointment or re-inking my Waterman pen.

‚Put away wool sweaters‘ has been on that list for four days in a row but hasn’t happened.