I woke up early, did yoga and meditated and then decided to just read and read and read. There was breakfast with the boy who had to go to school for a test but came back afterwards because the schools are doing shifts again. Only grades 10 to 12 are still writing all the tests together. For this they meet in one of the biggest rooms in the school so they can keep their distance and they have to wear masks as well.

I crocheted a bit. The blanket only needs two more rows of squares before I can start making the border. There was a bit of housework and then I went off to the supermarket. It only took about an hour this time because I had bought so many groceries the week before. I tried writing afterwards but failed.

My husband made lunch all by himself: 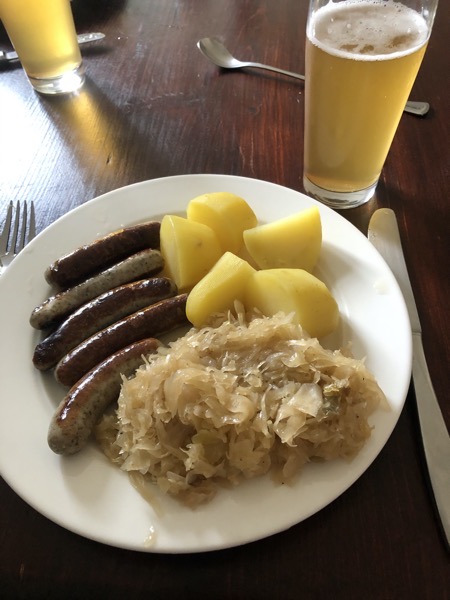 After that I took a break instead of doing the dishes and answered emails from students. There were two more in quarantine so I would have to switch them to video lessons, one wasn’t feeling well, one had to reschedule and one had to cancel. So I ended up only teaching three students in the end.

I really enjoyed having extra time but I did not make the best of it. What I did, though, and that was the best idea I had all day, was that I asked the boy if he wanted to watch some ‚Eternal Love‘ with me in the evening. And we did and it was great. Even though the episode had a lot of set up and exposition. There were actual, „As you know, Bob“-scenes. Nobody is called Bob in that series, though.

And then I was too tired to even write this post or do the dishes or anything, so I just brushed my teeth and went to bed around nine.

Today there will be the weekly cleaning of the house (for real this week), quite a bit of teaching with all the rescheduling, and then the weekend.