The answer, of course, is bad planning. This is what we call the ‚aspirational to-do list‘.

I did start out pretty good and waking up early. Then I did the ‚I’ll just look at my phone real quick‘-thing. Yeah, I know. No yoga, the usual. I did have breakfast almost on time and then it was too late to write. I did start watching the videos for the two courses I’m doing at the moment, though, so at least I didn’t waste more time.

My husband showed up, we talked, I knitted. I finished the second sleeve on my Eureka cardigan the day before and got started on knitting the rest of the body. Chores were done and then it was time to go running and walking. After a conversation with my husband and the boy the night before about my running-problem I was super-motivated and actually ran all through my 2-minute running intervals: 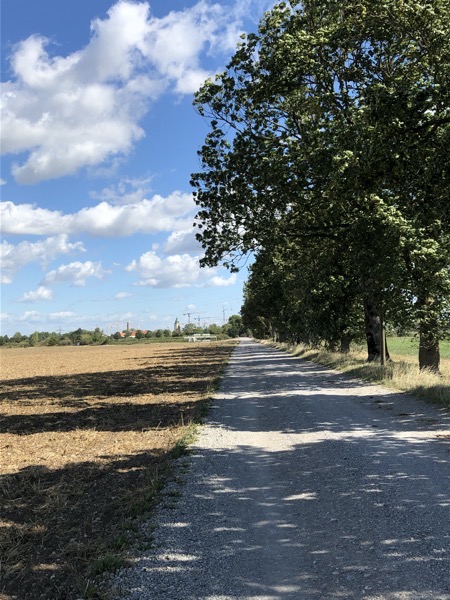 It was sunny but not hot. Very windy, though: 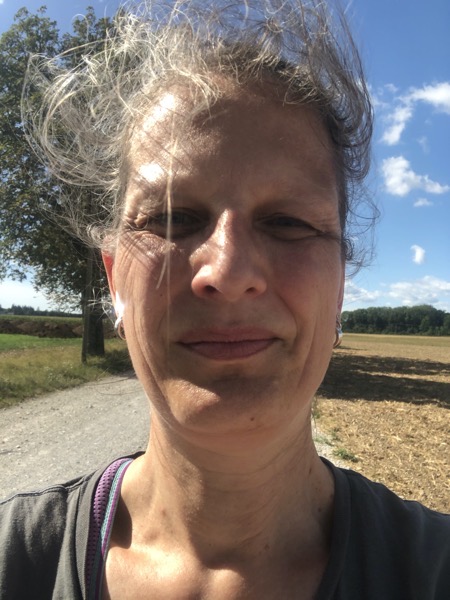 I’m still only wearing one earbud but my earache is as good as gone. Phew.

I came back home, took a shower and then helped with making lunch. My husband had wanted to make aioli from scratch for the first time ever. Well, that didn’t go well. We both tried and only managed to ruin some egg yolks and olive oil. And that panic of not getting the aioli right was so distracting that the tagliatelle were cooked too long and the sauce that we had meant to eat was ruined as well. My husband was not happy. Fortunately we still had one jar of pasta sauce that my husband had gotten from a friend and so we did not have to go hungry: 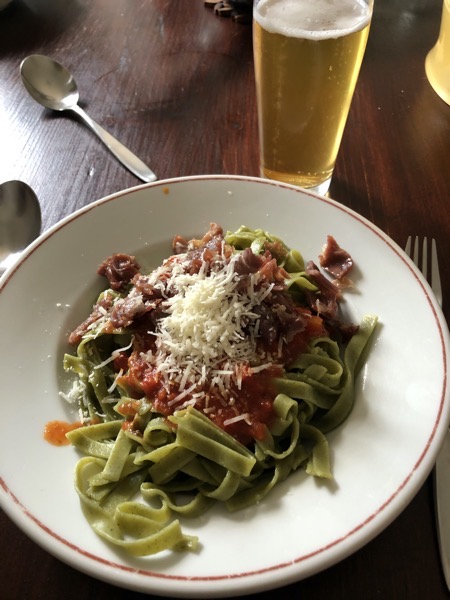 My husband has sworn off trying French cuisine or anything mayonnaise-like ever again. Me, I might try again in the future but not when I’m hungry and stressed beforehand.

The boy and I did the dishes, I took a short break and then watched some more videos. Talked with my husband who was trying to repair an amp that broke the day before and then some more videos and course materials. I’m not that convinced about the classes I’m taking, I mean, I am learning stuff for sure, but maybe not enough for the price I paid? On the other hand I’m only about halfway through both of them, so we’ll see. And I’m video-ed out. The beauty of audio podcasts is that I can walk around while listening to them. With video I’m chained to my seat. That’s okay if there is something for my eyes to process but video that’s only talking heads? Probably not worth it.

I wrote some e-mails, I did not answer comments and such even though that was on my list, I did not sew and I did not write. Meh.

Dinner was had and we watched episode 17 of ‚Eternal Love‘. So sweet! We are getting a better grip on who is who and what is happening. I still can’t remember most of the names but I’ll get there eventually.

I decided to leave the dishes because it was just a few plates and knives, started writing this post, was very determined to do my ten minutes of yoga, fell down the internet rabbit hole, saw that my sister had sent me a message asking for my parents’ wifi password, tried finding it but needed three tries to get it right. At least I hope that was the right one.

Today will be a rather full day. In the morning I want to go to the supermarket, that’s usually about an hour of walking, then we will go out for lunch to the nice Italian restaurant that was closed on my birthday and then I will cap the day off by accompanying my husband to the hardware store. I have no idea if we’ll walk to the restaurant or not but we will be biking to the hardware store.