The night before I was so tired that I didn’t even set my alarm or told my watch that I was going to bed. And then I slept until 6.15. So. No yoga, no meditation, no nothing. A nice breakfast, though, with some reading and then talking with my husband.

I called my mother who is still in the hospital. She is not feeling better, poor thing.

Then I tried being productive. I sat in my studio with the door closed, ready to write and do some other things but in the end I just surfed the web and watched some sewing videos on Youtube.

I did manage to emerge too late for helping with making lunch and by then my husband was so fed up with nobody showing up (the boy’s breakfast was still sitting on the kitchen table untouched at noon) that he had decided to strike.

So I woke the boy up who had overslept by several hours, picked up lunch-prep and talked with my husband until he was ready to tell me what he had planned to do next. Lunch was only fifteen minutes late and rather good: 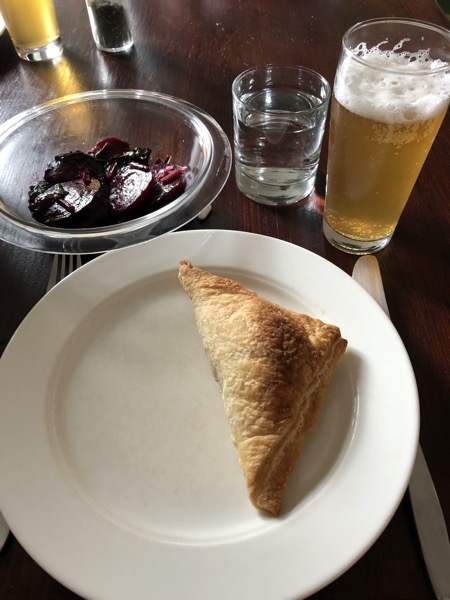 The pastry was filled with chard from out garden, lots of herbs, feta and olives. I had three in all, the pictures only shows the first one.

In the afternoon I had hopes of pulling out the sewing machine but instead I watched more videos, played a game on my iPad, read Ravelry, hung up a load of laundry and did lots of dishes. Not all that fulfilling. I did finish the game later that day, though, and I also finished reading ‚Resurgence‘ and started a new book.

The boy and I watched an episode of ‚Enterprise‘. I was feeling about as meh about this episode as about the whole day.