I didn’t sleep well at all. I woke up half a dozen times, had nightmares and had to use the bathroom constantly. And in said bathroom where about two dozen mosquitos waiting for me. Not fun. And on top of that my left ear was hurting.Not quite enough to go to the doctor but enough that I felt I shouldn’t accompany my husband to the lake.

When I told him he was very sad. But in the end it turned out to be a good decision, it was really hot all day. Riding our bikes in the heat would not have been fun, jumping into the lake next to hordes of people would have been unpleasant and doing all of that with an earache seemed inadvisable.

I did start cleaning but then met my mother-in-law in the hallway. We talked for fifteen minuets or so and then I called my mother on the phone. I hadn’t talked to her for two days and wanted to hear how she was doing, if she had her corset yet and when she would be leaving the hospital.

With my father not being an help and her sister still in need of help herself with her shoulder still not fully back to normal my mother is trying to stay for as long as she possibly can. She is still in great pain, every small move can send her over the edge again. She is nauseous all the time from the medication and rather weak. She did try the corset and walked down the hall but then had to rest.She can lie down or stand and walk but not sit. Using her arms hurt. She can’t sit and make herself something to eat. She’s already so over the whole thing.

So when my husband came back from his run I had just started emptying dustbins. No other cleaning happened. After breakfast my husband had been so nice to kill all the mosquitos. So at least those were no longer out to harm me. Mind you, I still need to clean them off the ceiling.

The boy ate lunch with his grandmother while my husband and I made and ate spaghetti aglio, oilio e peperoncino. It was very good but rather hot. 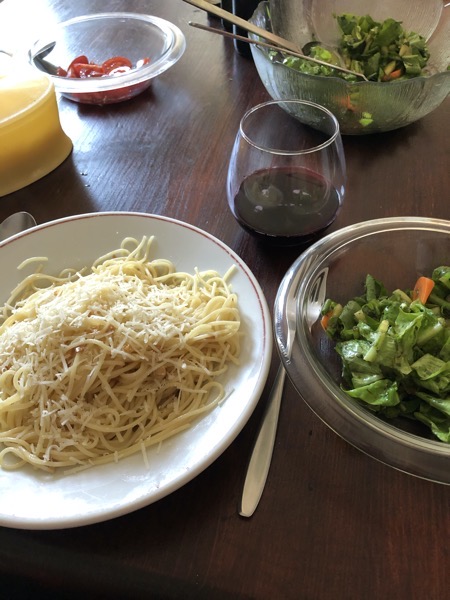 After lunch I took a break, then spent some time feeling sorry for myself and then I spent enough time on the podcast to get it out. Phew.

By then the day was nearly over. I had some vague plans to write some more in the evening but by 8.30 I was tired enough to nod off while starting this post. So I did sensible thing and went to bed early. ‚Enterprise‘-watching and dish-washing happened beforehand.

Today there will be running, maybe, and writing and probably the second benchmark test for the Nerd Fitness Chin-up Challenge. Also TV of some sort. Wish me luck, I’d like my ear to get better pronto and the rash I’ve been having for a week as well.