I had set my alarm for 5.30 so I only got about six hours of sleep. And then promptly went on to look at Facebook and such for two hours. Still a bad move. When my husband showed up at 7.50 I was sure it was  much earlier. Sigh.

Breakfast was had a little later than usual. And then I didn’t even have time to knit. Or do the dishes. My mother texted me and said that she now knew that she had broken two vertebrae. At about the spot where a bra band hits. And the was still in great pain. The good thing about this is that she now will get a corset to stabilize her. I’m pretty sure once things can’t shift around as much the pain will get less. And right after that it was time for me to get ready for my annual cancer screening at my new OB/GYN. I really like him. Well, I did like him before he became my doctor when he was still my husband’s student. He explains everything and asks good questions and is really calm and nice. He also seems very competent. And much more so that my old OB/GYN, Since I was in the next town over anyway I also had the prescription for my thyroid meds renewed and went to the nice health food store for veal cutlets and potato chips. Oh, and saffron. And face cream. I am still having a weird rash on my neck. I believe it comes from sweating a lot. I’ll try that cream out to treat it. I do have ‚Everything Balm‘ and it helps but I am growing increasingly sensitive to tea tree oil.

I took a train back, made a detour to the pharmacy and the tea shop (my husband ran out of his favorite breakfast tea and that after deciding that he won’t drink coffee on weekdays anymore) and then finally walked home. Where my husband was in complete lunch-making frenzy. So I washed my hands, put everything away, washed my hands again and helped with making lunch. We had fried zucchini blossoms first: 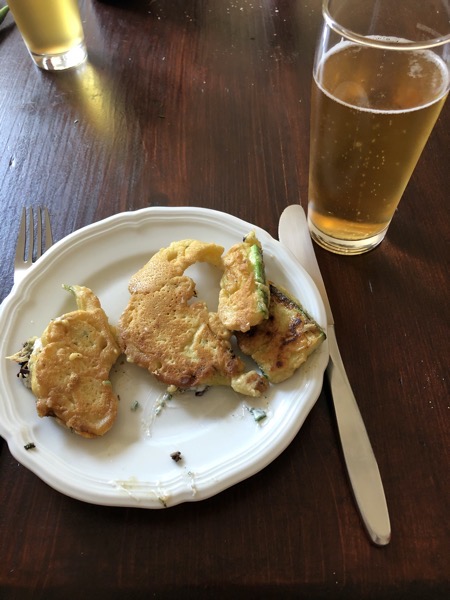 They were filled with goat cream cheese, olives, garlic and herbs and very tasty also slathered in pancake batter. The green bits are fried zucchini. And then it was time for the main course: 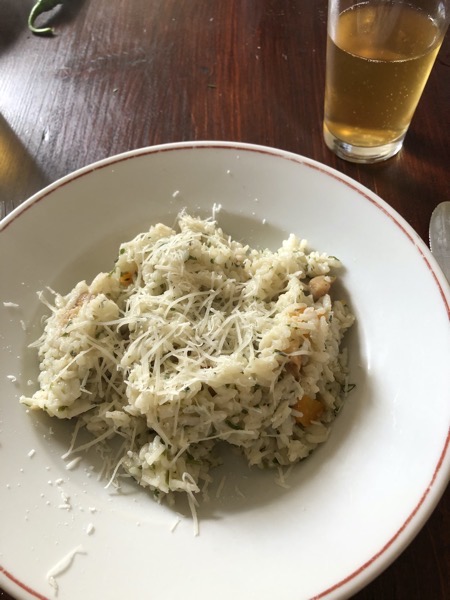 Risotto with porcini. And all kinds of other things.

And then I had to be quick. I ate some chocolate while the boy wanted my help with writing an email or two and then it was time to start teaching. Four piano students and one singing student. I really should make more music. That’s always a problem during breaks, especially during summer break. I somehow never get around to sing or play for fun. Another bad habit to break.

In my one-hour break between students I watched all the new videos in the ‚Publishing 101‘-course. I’m not quite sure if this week’s homework will be super-easy and not worth sending in or super-involved. We’ll see.

While being on trains and in waiting rooms all morning I thought about just stepping on a train to help my parents. My father doesn’t do much and even if he wanted he really couldn’t. He can’t even go grocery shopping anymore. And my mother will be on six weeks of strict bedrest or at least something similar. So the part of me that plans in the blink of an eye started thinking about buying train tickets and rushing North because there are still 2 1/2 weeks of summer break left. I would have to reschedule students and miss some income. And right at the point where I was about to cancel my dentist’s appointment I reigned myself in again. If I stepped on a train right now for seven hours straight there would absolutely be a risk that I would get infected and then infect my parents. I could only be there for a week or two. That’s not enough anyway. First, I have no idea how long my mother will stay in the hospital. While my father could use some help he can also ask the woman who cleans for them to get him things to eat. And the last time my mother broke a vertebra (yes, this has not been the first time) she did get help with housework. So, no need to pack my bags just yet.

After my last student for the day the boy and I ate dinner in front of the TV. This episode of ‚Eternal Love‘ (episode 13) was really sweet.

Then I stayed up too late yet again.

Today there will be running/walking, probably the editing of the podcast, maybe some writing, maybe gnocchi and veal cutlets for lunch but I’d rather use different potatoes than the ones we have in the house. One sewing would be nice as well but I doubt it. And reading. I think I haven’t read enough over the past few weeks.