I woke up early and promptly spent the first hour of the day on the internet. Meh.

I had breakfast, then knitted while my husband had breakfast and then waited for ages until the boy showed up. He overslept yet again. Then I did my homework for the Publishing 101 course and sent it off, helped with making lunch and then we actually ate lunch: 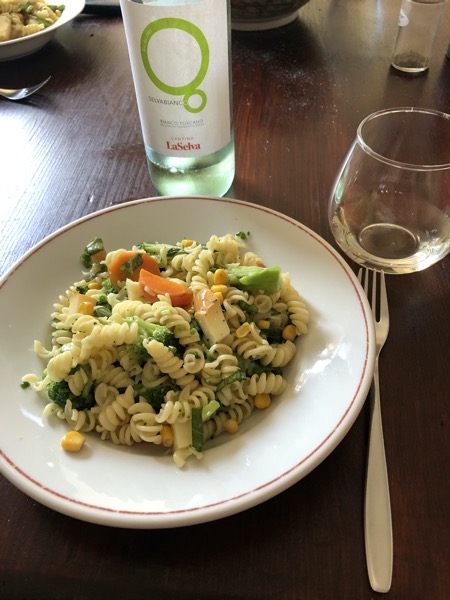 It’s ‚pasta salad primavera‘ from the „Saving Dinner“-book. It’s the only thing from that book that we still cook. ‚Garlic Lemon chicken‘ also used to be a favorite. The salad was really, really good.

Then I didn’t really get anything done until it was time to go to the book launch party thing at my husband’s cousin’s house. She was presenting the book she put together from letters from her grandparents and such and memories that her mother and aunt and her grandfather wrote down at some point. It was rather heart-warming. Here you have these regular people who bought a shop in Silesia and had two daughters and then there were just thrown into a world war and then had to deal with all kinds of things. A friend of the cousin’s read a couple of letters out, there was Prosecco and Polish beer and Silesian poppy seed cake (that tastes exactly like the poppy seed cake I remember from my childhood in Westphalia) and the eleven people who were there all had a good time.

We didn’t know that there was a plan to have a barbecue afterwards, our invitation said the whole thing would be over by six. We stayed until 6.30 and then decided to eat dinner at home.

The boy and I watched another episode of „Eternal Love“ while eating sandwiches. This time the translation was rather, um, fanciful. I still don’t know what, „Don’t worry, Little Five has half of your completion’ means. I can take a guess but that doesn’t mean I actually know.

Then I sat around some more, doing nothing much.

Today there will be running and the recording of the podcast episode. And everything will be fine.

I also need to plan the week. Not now, though.