I was completely determined to get up super-early. Which meant I rolled out of bed around six, looked at my phone right away (by now it has become a very solid habit but it’s still a bad idea), got dressed, took my thyroid pill, thawed blueberries for my breakfast and got out the door for my run. Before then I had received an email about a course I had been waiting for for weeks. I tried enrolling (yes, before seven in the morning) but there was a technical glitch and I couldn’t.

The run was way better than it would have been three hours later: 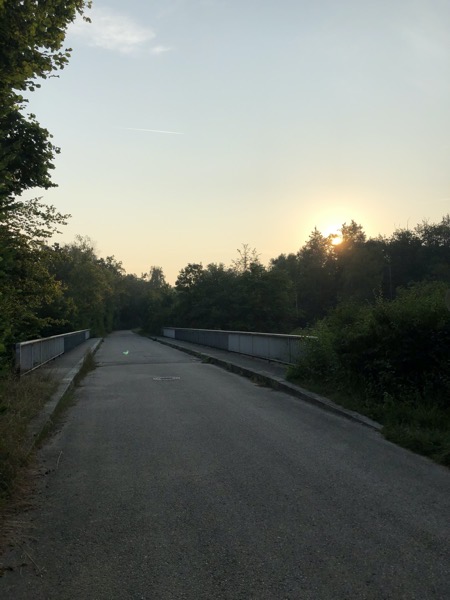 It was still rather warm but bearable. The halfway point ended up being right at the bridge over the Autobahn: 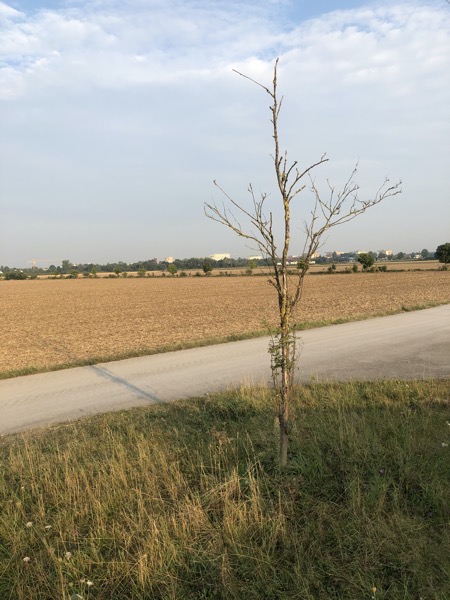 The view to the other side was not quite as nice: 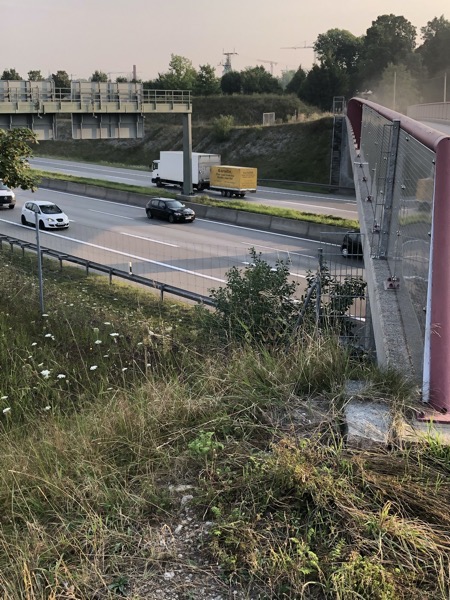 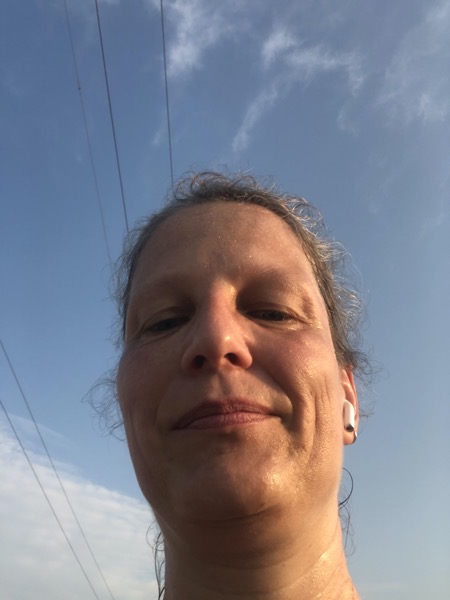 Yes, I am starting to develop an extra chin and extra padding in other places. I solemnly swear to eat less potato chips, chocolate bars, licorice and ice cream.

I came back home feeling all virtuous, even though I only ran for about fifteen minutes or so, I walked the rest of the 60 minutes, ate breakfast, read a bit, looked at Ravelry and waited for the boy. When he finally showed up I immediately left so I could buy potatoes and some other stuff from the other health food store. The plan was to go to the health food store first, taking an insulated bag with me so the frozen stuff wouldn’t melt and hit the farmer’s market afterwards. In the end I looked at the potatoes in the health food store and decided to just buy those and save myself more walking, standing in a queue and carrying.

Back home I talked with the boy a bit and then I went right out again and got a case of beer and a case of soda. I took my husband’s bike that has the trailer permanently attached. I only pushed it, I don’t think I could ride it.

Back home it was already a little late to start cooking. I had instructed the boy to start peeling potatoes but his lack of practice meant that he hadn’t gotten very far. So I sat down and speed-peeled the other half while he managed two more. Same thing with the cucumbers. At least he got a little better. With all of that lunch was about twenty minutes late which is good, all things considered: 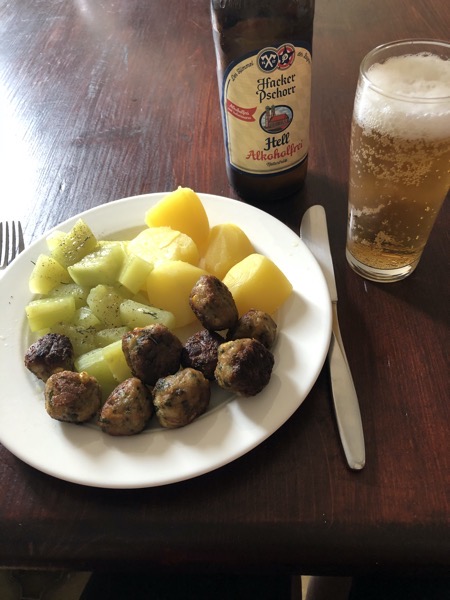 That is potatoes, cucumbers and köttbullar from the health food store. They were actually rather tasty, first time I ever tried them.

Now the big thing I wanted to get done for the day was recording the podcast. But. First, the boy wanted to take a shower in the morning. Since I had to go to the market anyway I let him. Then we were already late for making lunch so I decided to shower after that. And then I totally slumped for two hours after lunch. No dishes done, nothing. So around four I finally got moving again. Which meant I would have had to record the podcast with dripping hair, not quite the look I’m going for. So I took my shower, finally, did all the day’s dishes and then it was almost time for dinner.

The boy and I watched the finale of the first season of „Enterprise“. Not a bad episode even if the boy fell asleep right before the end.

And then it was time for my husband to come home. I had followed the progress of his trains all afternoon. He stepped into the door, declared that he wanted to shower first (good idea with the heat and the virus) and we promptly started with the conflict again. I asked him if he wanted something to eat and he felt that he had made clear he wanted to shower first and do everything else later. While I thought, I’ll just ask him and if he wants fried potatoes I’ll get those started while he is in the bath. And he thought, „I totally made clear that all I want right now is take a shower and set my backpacks down. Why is she asking me this? What am I supposed to do? What am I doing wrong?“ The resulting conversation took up two more hours, all through my husband eating dinner (rolls and salami and such), him going into the garden watering everything, coming back and talking for two more hours.

It’s a bit exhausting. He keeps thinking if we just get to the bottom of this it won’t happen again while I’m thinking that there are just crossed wires and we can just step back, re-assess and communicate better. Meh.

Which meant I started writing this post way too late and went to bed after 11. Which didn’t bode well for today.

Somewhere in the afternoon the class I wanted to take opened again and I spontaneously enrolled. I decided to take the money from my „savings for August“-budget. Well, the part that wasn’t already in my „author business“-budget. And then I realized that I just signed up for two classes, one that’s already in progress and will go on through mid-September, and another one that is only five days but probably pretty intense starting August 24. And a day after that class ends Tour de Fleece 2.0 will start. That will be fun.

Oh, and I had a breakthrough yesterday as well. First, I finally finished typing the corrections in for the novel-in-progress and second, I spent some time talking my way through my big plot problems with the boy. Poor thing, but on the upside he is becoming quite good at the principles of storytelling. At least in theory.

Oh, and another big thing! The boy got the results of his Cambridge test and he had full marks in three parts and very good marks in the other two and has now earned a C2 Cambridge Advanced English certificate which means he is at ‚almost native speaker‘-level. We are all very proud. Well, my husband doesn’t know yet but he will be once he’ll hear about it.

So, busy day. And today won’t be less busy. There will be talking with my husband about his trip, walking to the grocery store, teaching five students, trying not to waste the time in between, bodyweight training (I hope) and I don’t know yet if the boy and I will watch the next episode of ‚Eternal Love‘ or the first episode of season 2 of ‚Enterprise‘. I also should try to start my homework for the publishing class. It won’t be hard but I need to do it nonetheless. I will have a one hour break between students but I don’t think that’s really enough time to record a 45-minute podcast episode. And I really should do a sample buttonhole because I have decided I want to wear the new dress on Sunday. Of course I did.