I woke up a little late, did yoga, meditated and had breakfast.

I had planned to knit while my husband ate his breakfast and then to go running right away before it would get too hot.

Well. My husband showed up late because he did extra stuff to prepare for his trip and so I left a bit later than I would have liked. It was really hot: 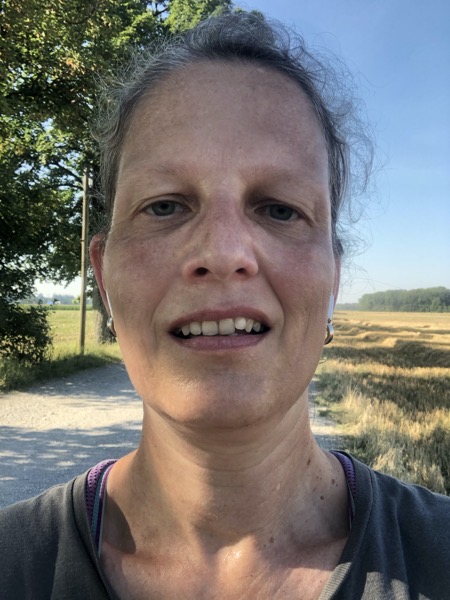 There was a lot of slow walking, not a lot of running. But the scenery was nice. Even with the dust from the tractor that just came through: 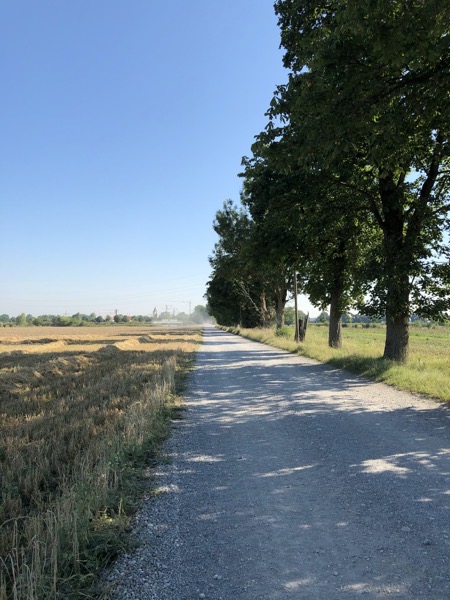 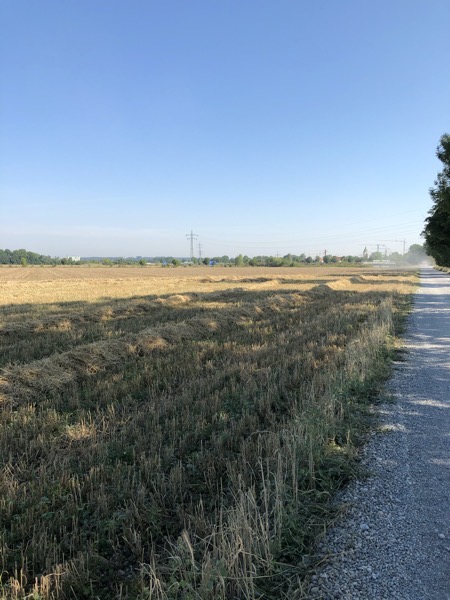 Back home my husband was getting ready for departure so I just sat there and waited. First so that he would have all the hot water he needed to take a shower, then so that we could walk around the garden so he could instruct me on proper watering procedures and then in case he needed something. After he left I jumped into the shower to get ready for lunch.

Somewhere in between those things I had gotten a message from my sister that our mother was in the hospital again. Because she had taken a fall on Friday. Crossed lines meant that we didn’t know anything specific, my father is not good with that kind of information. So for a moment there I thought that my mother had fallen (again) and had gone to the hospital (again) without my father uttering a word (again) and that all of this had only come out because my sister called our parents.

In the end it turned out that my mother had fallen down the last two stairs of the staircase and knocked her head against a door. She was in so much pain that she was afraid she had broken a bone (again) so she went to the hospital on Monday morning and got x-rays. The x-rays were apparently inconclusive so she got sent back home again with painkillers. She is supposed to get an MRI today.

For lunch the boy and I went out for sushi: 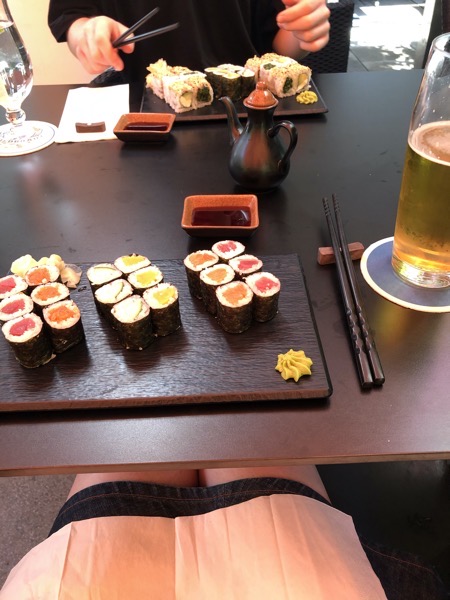 I forgot to take a picture of our spring rolls but managed to catch a bit of the atmosphere: 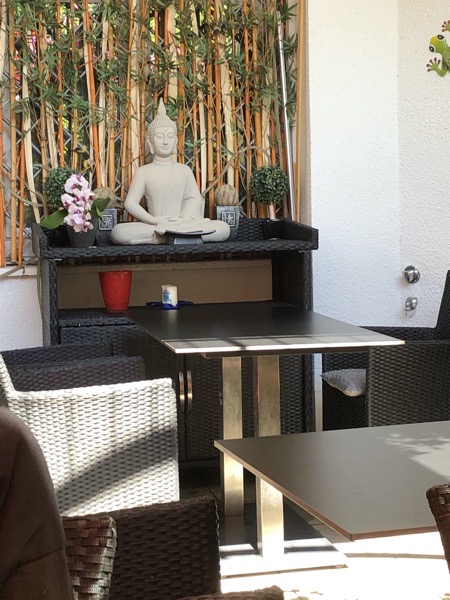 We were sitting outside with ample distance to the other four guests, everything was fine and the sushi was delicious as always.

In the afternoon I dragged my feet a bit but finally managed to work on the novel for a bit at least.

With all the doors open because I wanted to make sure I would hear the mail person ringing the bell I heard an insistent beeping coming from somewhere in the house. It took me a while to find the source: it was the washing machine. That had the beep going on and a flashing red light. Hurray!

The light was indicating a blocked drainage. Ugh. With the machine full of laundry and soapy water. But. The manual is sitting right on top of the machine and so I just followed the instructions, opened a small cover with a tool hidden inside the part where you put the detergent, pulled out the lint trap (not quite sure that’s the right work for a washing machine but you know what I mean) and cleaned it. The whole thing was totally clogged. I don’t think anyone has cleaned that ever.

The good thing was that the machine was working again afterwards. Phew.

The boy and I watched an episode of ‚Eternal Love‘ that was fascinating. We are starting to get better at telling the characters apart even though we often can’t remember their relationships. And the whole thing is a feast for the eyes. And then an episode of Enterprise that was, um, a little problematic. It was the first time humans set foot on Risa and there were many cringeworthy moments.

Then we did a big pile of dishes, I started writing this post and went to bed too late after reading „The Biggest Bluff“ some more. I should definitely get back to reading the novel I put aside a few days ago before I forget where I was.

Today I will go to the health food store, record the podcast after all, do some bodyweight training, take a look at the new lessons in the ‚Publishing 101‘-course and watch TV with the boy again. Since I’m the one doing the cooking today there will be frozen pizza. Ahem.