It wasn’t intentional. My intentions were all the best. Still, I kept making those decisions. You know the ones. Like, you just stay in bed a little longer because you have a free day ahead and surely can do yoga later. (Spoiler! You won’t.) And there will be all the time for working on the novel later as well, so you can just eat breakfast slowly while scrolling through Instagram. (No, I don’t know why I keep thinking that’s a good idea, either.)

Other than that the day was pleasant. I started writing that dreaded newsletter but had to stop in the middle because my husband needed me to help cooking and then I didn’t get around to it again. But lunch was very good: 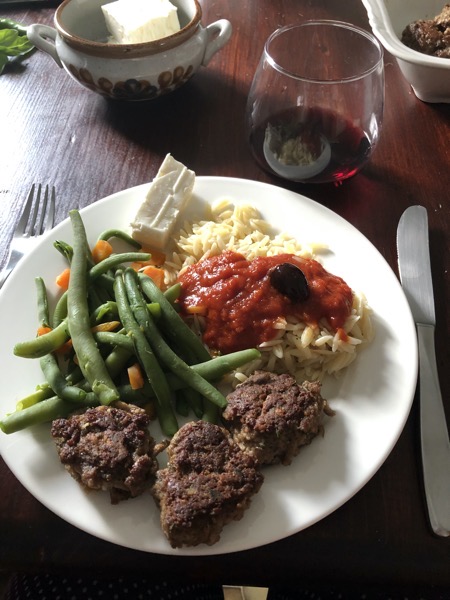 Green beans, carrots and the cucumber in the tsatsiki that you can’t see from our garden. The wine is one that my husband got as a present the day before from a friend. It’s a special edition to celebrate 40 years of the organic farm where they met when working there. It was funny, when my husband told his mother he had seen said friend my mother-in-law was surprised that I was okay with him seeing not only a female friend but a female friend who happens to be his ex-girlfriend. Um, why shouldn’t I? That was 27 years ago. Anyway.

In the afternoon I barely managed to do a few bodyweight exercises and after trying to get something done I settled for watching some of the videos I have marked to be watched later. I did plan out the week, so that was something, at least, and bought my husband’s train tickets. He’ll visit another friend for a couple of days until Wednesday. Oh, and I sent my homework off. I had some technical difficulties at first but then I finally managed to actually send an email from the account I wanted. Only took three tries and some googling.

Then there was dinner while watching the second half of ‚Blade Runner 2049‘. Brilliant and disturbing, great film. I started writing this post and wound down for the day.

So. Plans for today involve seeing my husband off in time for his train, eating out for lunch, maybe recording a podcast and running in the morning.