I woke up early, wasted some time and did my yoga and meditation. Had breakfast and didn’t get everything done in time to work on the novel-in-progress. (I really need to change things up.)

I sat there starting to turn the heel on the current sock while my husband was eating his breakfast and decided to go running first, before housework because it was so hot. I switched to 4 minutes of running alternated with 2 minutes of walking but after being halfway through the second running interval I just walked the rest of the way because it was too soon after breakfast and way too hot. I even forgot to take a picture.

Took a shower, spent some time on the internet, did the dishes, gave myself a pedicure and then it was time for lunch: 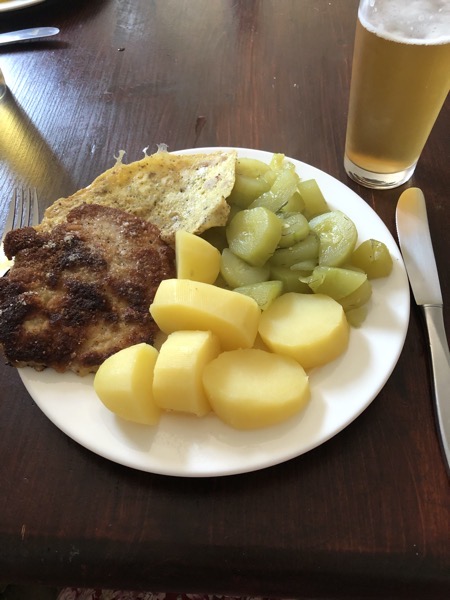 That’s pork cutlets (that we took out of the freezer too late), potatoes and cucumbers from our garden. All very good.

I took a short break, talked with my husband some more and then had a Skype meeting with a friend. We met way back in 1989 or so while still at university and since she moved away we are only meeting up about once a year when her family is visiting her father-in-law who lives nearby. This year they are not visiting and so we decided to meet on Skype instead. It was rather nice and both her daughters showed up at some point in the video, as did her husband. We talked for 1 1/2 hours or so. I had expected the whole thing to last longer.

For the video I unearthed the Eureka cardigan I’m currently knitting because I wanted something as mindless as possible but didn’t want to knit more on the Samadhi-shawl because I’m debating using that yarn to make a cardigan instead.

So I talked with my husband some more and finished reading a non-fiction book, „Drink?“ By David Nutt. It’s pretty good but brought me less new information than I would have expected. On the other hand, I only paid 99 cents for it, so that’s alright.

My husband made tiramisù for today, the boy and I had dinner in front of TV and watched „Blade Runner“, the final cut. Still a very good film. I started writing this post, made a list for today and went to bed.

Today there will be some noveling, I hope, yoga, strength training (only a bit) and the watching of Enterprise. I’m not sure what else I’ll be doing, I don’t think I’ll record a podcast, I just don’t feel like it. Even though I had inspiration for two new episodes while watching some Youtube the day before.