I woke up pretty early, did start reading right away (bad habit? Not sure) and was just about to start doing yoga when the boy showed up around seven. I had forgotten that he had planned to go climbing early. So I made breakfast pretty quickly and sent him off.

M husband was rather early as well and we had a nice and pleasant conversation and a morning where we didn’t have to guess when the boy would show up.

I did the dishes and such and had just started the weekly cleaning when my husband came back from running and I had to take a break so that I wouldn’t get in his way all the time. I think I need to find a new cleaning routine because this one isn’t working. It doesn’t mesh with out respective schedules. I should try spreading things out evenly throughout the week. Not that that has ever worked for me before. We’ll see.

Then I started setting my bullet journal up for August and to plan the month. I had to stop that because my husband needed help with lunch which was delicious: 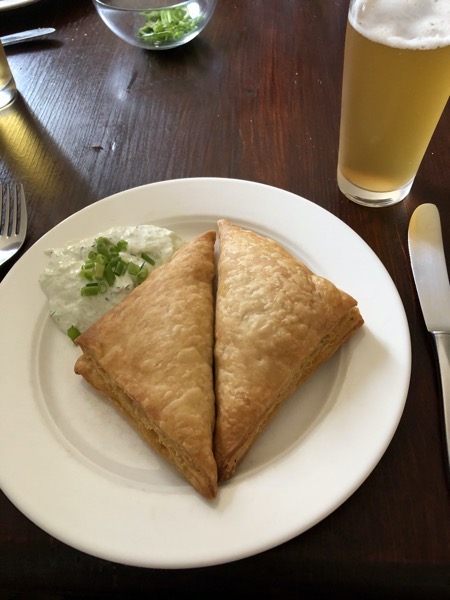 There’s feta, olives, pine nuts and some other things in those pastries.

I spent the afternoon reading some stuff on the internet, watching a free course on book marketing, well, part of it anyway, thinking about my newsletter, doing afternoon yoga (very helpful and energizing) and talking with my husband every ten minutes or so when he would wander in again to discuss something with me. I did finish the goal-setting for August and caught a live video with some costubers that I will have to watch again because I missed a lot of it.

Then the boy and I watched another episode of ‚Eternal Love‘. This one was really action-packed. And dramatic! People died! It was all very tragic! And we’re starting to learn a word of two of Mandarin or at least get used to it. I can’t knit during that show, though.

Then all three of us did the dishes together, I started writing this post and stared at the newsletter some more. This is getting ridiculous. Do you know that feeling when you have procrastinated something for ages and it feels like it is the hardest thing ever? That’s where I’m at.

Today there will be some running, preferably early because of the heat, my husband is planning to make tiramisù, there will be cucumbers and pork cutlets for lunch and I’m not quite sure what I want to do in the afternoon. It will be really hot, though, and that’s not good for productivity.

In the bullet journal I have revived the habit tracker. That will be interesting. I think I have ten things I’m tracking, or more. I hope I’m not setting myself up for failure.